The Book of Colossians was written by the Apostle Paul about A.D. 60-62, while he was imprisoned in Rome. One purpose was to correct the heresy that had sprung up in the City of Colossae. 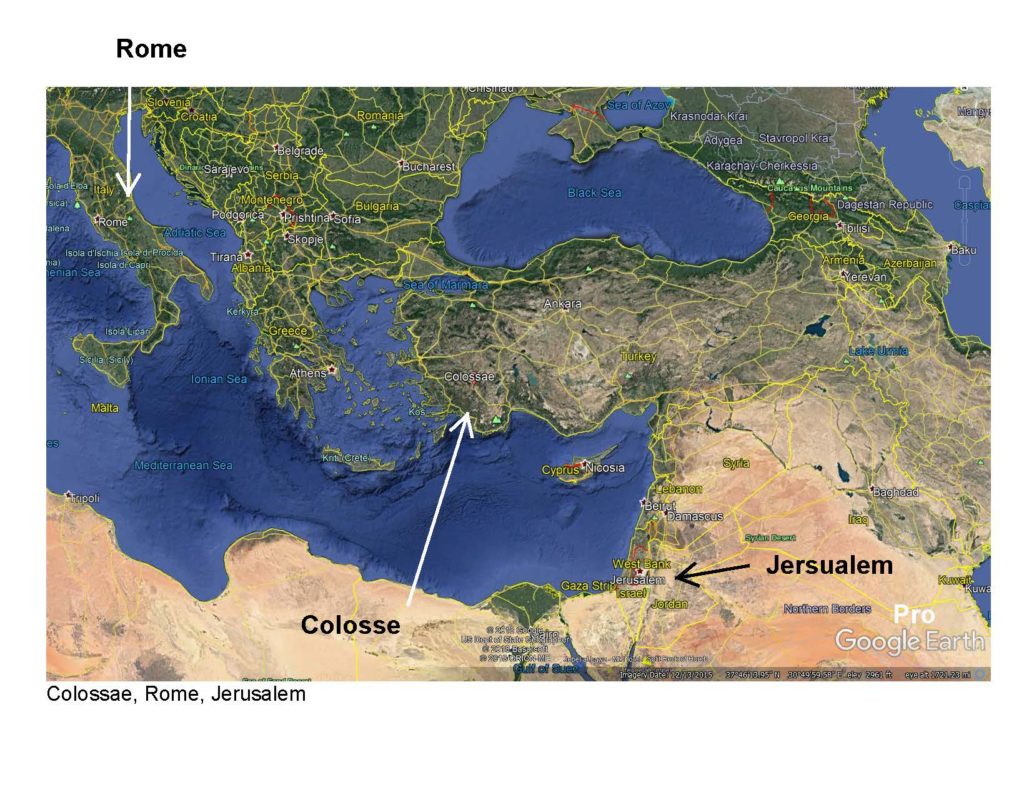 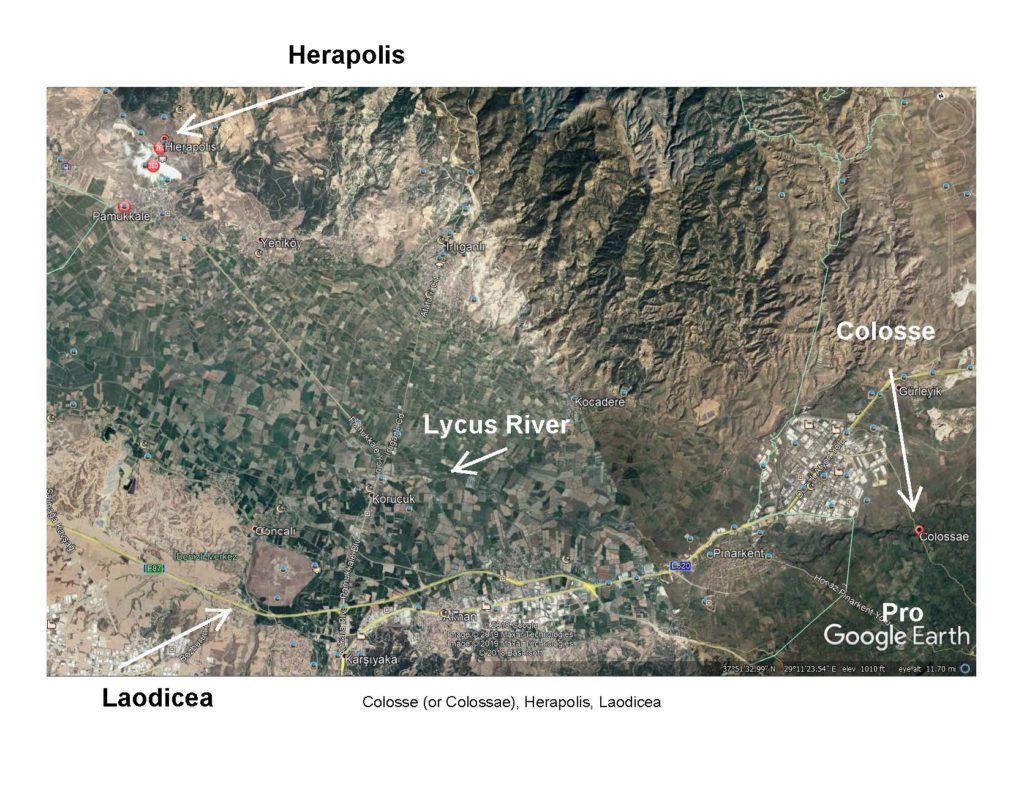 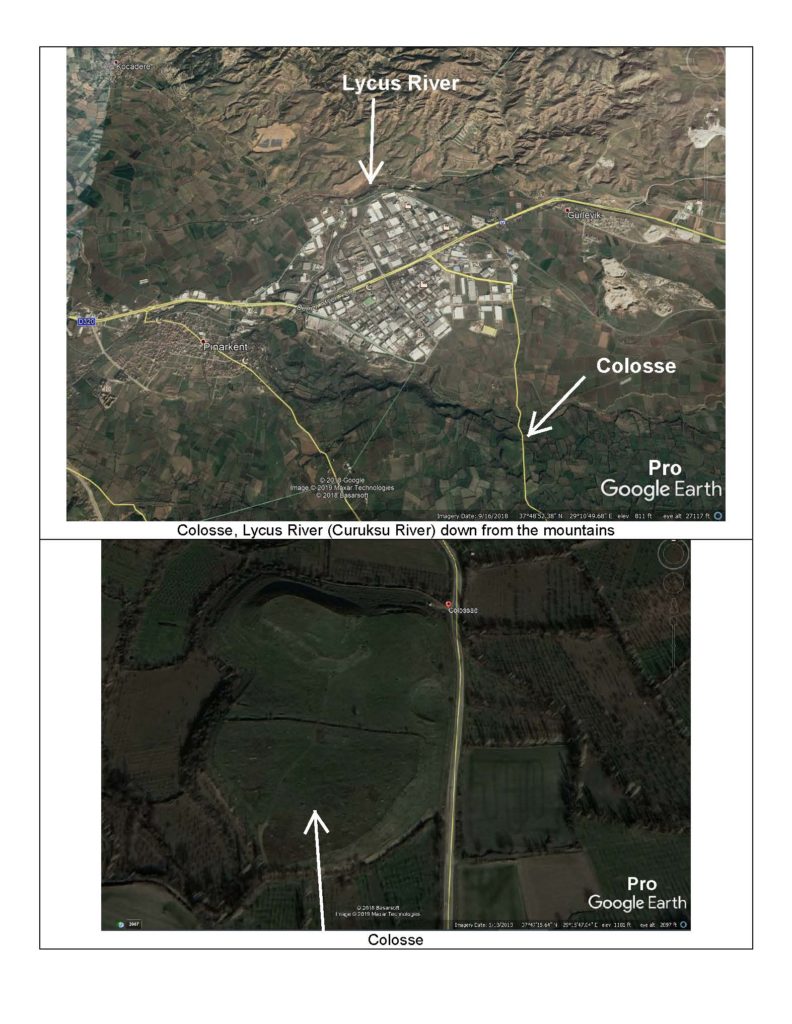 Paul respond to this new problem growing in the church, known as Gnosticism, a heresy.  They considered themselves spiritual leaders.

These heresies promised people “spiritual perfection” if they entered into the teachings and ceremonies, based on man-made traditions and philosophy, not on divine Truth.

Gnostics main doctrine held that Jesus did not have a real human body, but only a phantom { something that can be seen or heard or whose presence can be felt, but that is not a physically present body}, a ghost, only spiritual, not material.  They did not believe what Jesus said about himself.

Paul deals with this heresy directly.  So many individuals today are trying to rob Jesus of his deity is why it is important to understand Gnostics.

Colossians 1:1 Paul, an Apostle of Christ Jesus by the will of God, and Timothy our brother,

Colossians 1:2 To the Saints {God’s Holy People} and faithful brethren { brothers and sisters} in Christ who are in Colosse: Grace to you and peace from God our Father and the Lord Jesus Christ.

Colossians 1:3  We give thanks to the God and Father of our Lord Jesus Christ, praying always for you,

Colossians 1:4 since we heard of your faith in Christ Jesus and of your love for all the saints { God’s people};

Your faith is in a person, not a “system,” or doctrine, or philosophy.

Faith is totally relying on someone. Who is your faith in?

Colossians 1:5  because {the faith and love} of the hope which is laid up for you in heaven, of which you {already} heard before in the word of the truth {or message} of the gospel,

Which “hope”? The Second Coming!

Our hope is “laid up”—reserved, set aside, for us.   “You can’t take it with you but you can send it on ahead!”  Laid up for our future use, in heaven.

Colossians 1:6 which has come to you, as it has also in all the world, and {the Gospel}is bringing forth fruit, as it is also among you since the day you heard and knew {or understand} the grace of God in truth;

The gospel brings forth conversion wherever it is preached.

Colossians 1:7-8 You learned it from Epaphras, our dear fellow servant, who is a faithful minister of Christ on our behalf,  (8)  and who also told us of your love in the Spirit.

He was one of the primarily responsible as founder of the church there.

Paul sets forth certain blessings for which Paul prays for Colossians

Colossians 1:9 For this reason, since the day we heard about you, we have not stopped praying for you. We continually ask God to fill you with the knowledge of his will through all the wisdom and understanding that the Spirit gives,

Fill you with the knowledge of his will. This would be their best security against false teaching, and an assurance of a faithful life.

Colossians 1:10 so that you may live a life {or walk} worthy of the Lord and please him in every way: bearing fruit in every good work, growing {or increasing} in the knowledge of God,

Walk worthy of our vocation or calling:

Walk worthy of the gospel:

Colossians 1:11 being strengthened with all power according to his glorious might so that you may have great endurance and patience,

The same Holy Spirit that raised Jesus from the dead operates in us:

Express thanksgiving being strengthened with endurance and patience

Paul lists those things for which he gives thanks to the Father.

Colossians 1:12 and giving joyful thanks to the Father, who has qualified us to share {partakers} in the inheritance of his Saints {Holy People} in the kingdom of light.

Colossians 1:13 For he has rescued {or delivered} us from the dominion {power} of darkness and brought {or conveyed or transfer} us into the kingdom of the Son he loves,

God has brought us from this life of under the power of darkness {Satan} to light, being with God when we received the Holy Spirit living in us.

Paul response here rules out the whole system of angels that the Gnostics placed above Christ. It is Christ’s Kingdom in which he is King and He has moral and spiritual rule ship over the Kingdom that will be established.

Colossians 1:14 in whom we have redemption {other translations, through His blood}, the forgiveness of sins.

We are redeemed from sin which were blotted out

Colossians 1:15 The Son is the image of the invisible God, the firstborn over all creation.

In contrast to the Gnostic (and the Muslim) who maintains that God can never be known or understood, we have One {Jesus} who has made God known to us. Paul says Jesus is over all angels and lays a foundation for the reproof of all worshippers of angels.

Paul afﬁrms that Jesus Christ is “the express image of The Father.

Colossians 1:16 For in him all things were created: things in heaven and on earth, visible and invisible, whether thrones or powers or rulers or authorities; all things have been created through him and for him.

Jesus must have existed before any creation

Colossians 1:17 He {Jesus} is before all things, and in him all things consist {or hold together}.

The Four Physics Basic Forces that hold all things together.

Colossians 1:18  And he is the head of the body, the church; he is the beginning and the firstborn from among the dead, so that in everything he might have the supremacy {or preeminence}.

Beginning:  Jesus did the original creation which began from him and in him to become the firstborn from the dead to Spirit and we will follow Him.

Preeminence: is used nowhere else in NT. This is The Theme of this epistle, means; Means: To be first, in rank or influence

Colossians 1:19 For God {the Father} was pleased to have all his fullness dwell in him,

Fullness dwell: means, sum total of all the divine power, that was His from the beginning and being permanently in Him.

Gnostics, seem to have used this word {fullness} as a technical term for the area between heaven and earth where different levels of angels lived with different powers. The Gnostics viewed Christ as one of many spirits existing in this area between God and all people.  Paul warns the Church the true fullness dwells in Jesus alone.

Colossians 1:20 and through him to reconcile to himself all things, whether things on earth or things in heaven, by making peace through his blood, shed on the cross.

We know that Jesus shed blood makes atonement for our sins

Colossians 1:21 And you, who once were alienated  {from God} and enemies in your mind by wicked works {your evil behavior}  yet now He has reconciled

Colossians 1:22 But now he has reconciled you by Christ’s physical body {of His flesh} through death to present you holy in his sight, without blemish and blameless,{ and above reproach in His sight}, free from accusation

Colossians 1:23 if indeed you continue in the faith, established and firm, {grounded and steadfast} and do not move {away} from the hope held out in the gospel. This is the gospel that you heard and that has been proclaimed {preached} to every creature under heaven, and of which I, Paul, have become a servant {minister}.

The hope is when we are to be changed to Spirit Being at Jesus return.

False teachers attempted to move them away from the hope of the Gospel.

Paul’s Ministry to the Church

Colossians 1:24 Now I rejoice in what I am suffering for you, and I fill up in my flesh what is still lacking in regard to Christ’s afflictions, for the sake of his body, which is the church.

When Paul was arrested in Jerusalem on false charges, the Jews listened to his defense until he used the word “Gentiles”. It was that word that infuriated them and drove them to ask for his execution.  We will also suffer.

Colossians 1:25-26 I have become its servant {minister} by the commission God gave me to present to you the word of God in its fullness, (26) the mystery that has been kept hidden for ages and generations, but is now disclosed to the Lord’s people {Saints}.

Paul’s message was pure and uncorrupted by false teaching and these divine secrets, mystery, could never have been discovered by human reason, except by the Holy Spirit.  This mystery is justifying and sanctifying the whole gentile world, as well as Jews to be part of the Kingdom of God.

Colossians 1:27 To them God has chosen to make known among the Gentiles the glorious riches of this mystery, which is Christ in you, the hope of glory.

Jesus dwelling and reigning in us, Israel and Gentile, is the Mystery Paul is talking about.

Colossians 1:28  He {Jesus} is the one we proclaim {preach}, admonishing {warning} and teaching everyone with all wisdom, so that we may present everyone fully mature {perfect} in {Jesus} Christ.

Paul was a teacher of the truth, 3 point: preach, warning and teaching

Colossians 1:29 To this end I also labor, striving {with all the energy} according to His working which { so powerfully} works in me mightily.