Jesus gives message about Rivers of Living Water on the last day of the festival.

A division happen among the people “who Jesus was.”

Pharisees tried to Arrest Jesus at the Temple with Temple guards.

Now, the Feast of Tabernacles being now over.

The night before there had been a meeting of the Sanhedrin and people were divided in their opinion as to whether or not Jesus was the Messiah. Nicodemus defended Him.

John 8:1 But Jesus went to the Mount of Olives.

Jesus spent the night on the Mount of Olives.  The mountain about a mile directly east of Jerusalem and on the western side was Bethany where Martha and Mary lived.

The Woman Caught in Adultery

John 8:2 Now early in the morning He came again into the temple, and all the people were coming to Him; and He sat down and began to teach them.

The Feast of Tabernacles had ended the day before, but Jesus, at dawn, took advantage of the opportunity to teach the many visitors still in Jerusalem in the temple.

Sitting is the position of authority in teaching of the Scriptures as a teacher of the Law as one of authority and doctrine. 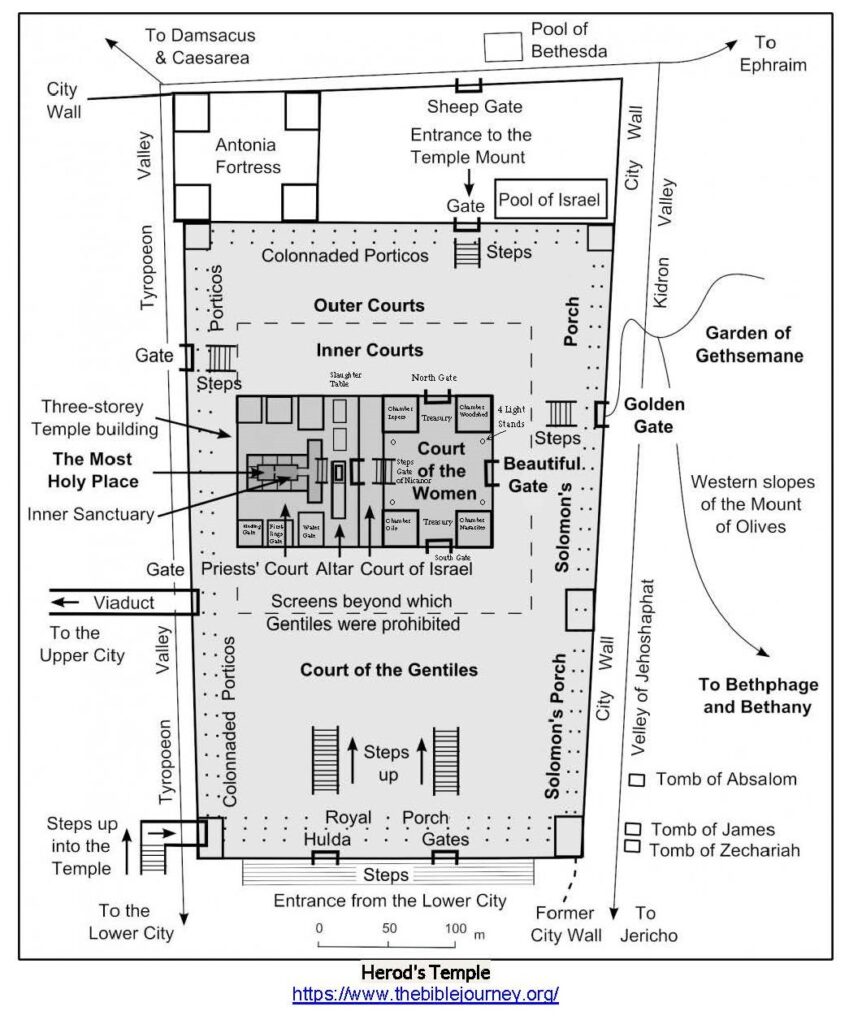 John 8:3 The scribes and the Pharisees brought a woman caught in adultery, and having set her in the center of the court,

John 8:4 they said to Him, “Teacher, this woman has been caught in adultery, in the very act.

John 8:5 “Now in the Law Moses commanded us to stone such women; but what do You say?”

Entrapment: To present to Jesus a no-win situation and trying to have Him say something that was contrary to the Law.

Remember, they were not allowed to do Capital Punishment because Rome denied it for the Jewish Leadership, not allowing nations under Rome authority to do their own executions.

John 8:6 They were saying this, testing Him, so that they might have grounds for accusing Him. But Jesus stooped down and with His finger wrote on the ground.  {As thought He did not hear them.}

When Jesus stooped down gesture was a recognized sign of not responding to what was being said to Him.

Psalms 90:8 You have placed our iniquities before You, Our secret sins in the light of Your presence.

Our Secret sins on earth are spread pit before you and you see them all and are an open scandal in heaven, what does our Guarding Angels think?

By Grace we are saved.

John 8:7 But when they persisted in asking Him, He straightened up, and said to them, “He who is without sin among you, let him be the first to throw a stone at her.”

Jesus stood up and in answering did not abolish Moses law, rather, He applied the law to the lives of those who had accused the woman.

John 8:8 Again He stooped down and wrote on the ground.

Exodus 31:18 When he finished speaking with Moses on Mount Sinai, he gave him the two Tablets of the Testimony, tablets of stone written by the finger of God.

Exodus 34:1 And the LORD said to Moses, “Cut two tablets of stone like the first ones, and I will write on these tablets the words that were on the first tablets which you broke.  {not on list}

John 8:9 Then those who heard it, being convicted by their conscience, went out one by one, beginning with the oldest even to the last. And Jesus was left alone, and the woman standing in the midst.

These individuals knew that Jesus know their lives, that they were as guilty as the woman they had brought.  Remember, they were not allowed by the Roman government to stone this woman.

John 8:10  Then Jesus stood up and asked her, “Dear lady, where are your accusers? Hasn’t anyone condemned you?”

The individuals were convicted by their own conscience, for they were not without sin.  The encounter with the Pharisees could have happen in a few minutes.  They wanted to stop Jesus from teaching.

Jesus wrote twice. What did He write? Seventh commandment? Name of the man? List of sins by the accusers?

Jesus did not condemn her, but told her, go and sin no more.”

Witnesses must be first in carrying out the sentence and put them to death (Deut 17:7).

I am the Light of the World

John 8:12 Then Jesus again spoke to them, saying, “I am the Light of the world; he who follows Me will not walk in the darkness, but will have the Light of life.”

Light of the world: Remember that the Feast of Tabernacles had just ended. The use of light is important for the feast:

In the Temple, in the Court of Women stood 4 golden candelabras, each with 4 golden bowls.

Some records suggest it illuminated the entire city.

Sun is physical light of the world

Jesus is the spiritual light of the world and exposes sin

John 8:13 The Pharisees told him, “You are testifying about yourself. Your testimony is not valid {or true}.”

Not true or valid here does not mean “false”; it means “not sufficient.” The Pharisees challenged Jesus on legal grounds, because no man on trial in a Jewish court was allowed to testify on his own behalf.

Their point was that if Jesus was the only one testifying as to who He claimed to be, it would not be enough to prove His case.

Jewish leaders attempted to discredit Jesus. It did not work. Now they openly attack Him with a series of charges and questions at Him as we will see.

John 8:15 You are judging by human standards, but I am not judging anyone.

The religious leaders pass judgment on Jesus without knowing the facts, but judge according to external, and superficial examination, appearances. Jesus lets their lives, actions and consciences judge them

Jesus just told the Pharisees that the testimony of two people is valid proof, that is, My Father and I.  Notice Jesus said your law, not our law. Deu 19:17

Also notice, there are 2 who bear testimony to the same thing.

John 8:19 Then they asked him, “Where is this Father of yours?” Jesus replied, “You do not know me or my Father. If you had known me, you would have known my Father also.”

Notice, the Pharisees did not ask, who, but where they already know the Father.

“Where is this father”: Asked in scorn.  They are highlighting what they understand is that Jesus was born of fornication (v. 41).

Jesus came to reveal the Father (John 1:18), and they had not received Him.

John 8:20 He spoke these words in the treasury, while he was teaching in the Temple. Yet no one arrested him, because his hour had not yet come.

John 8:21 Later on he told them again, “I am going away, and you will look for me, but you will die in your sin. You cannot come where I am going.”

Jesus reminded the Pharisees He is going back to the one Who sent Him. (John 7:33)

Jesus said He is Messiah from Heaven and they are from the earth.

John 8:25-26 Then they asked him, “Who are you?” Jesus told them, “What have I been telling you all along?  (26)  I have much to say about you and to condemn you for. But the one who sent me is truthful, and what I have heard from him I declare to the world.”

Jesus answers that His statement concerning Himself is always the same. He consistently claims that He is the Messiah, the Savior of the world

John 8:27 They did not realize that He had been speaking to them about the Father.

Jesus had clearly explained on several occasions that the Father had sent Him, and yet they did not accept it.  They knew about the Father from Psalms.

The Problem:  They understood that Jesus spoke of God, but they were unwilling to acknowledge that he really came from God.

John 8:28 So Jesus told them, “When you have lifted up the Son of Man, then you will know that I AM, and that I do nothing on my own authority. Instead, I speak only what the Father has taught me.

John 8:29 Moreover, the one who sent me is with me. He has never left me alone because I always do what pleases him.”

Imagine what the Pharisees will say about an individual saying, I always do those things which please Him. This is a distinct claim to deity.

Jesus answers that His statement concerning Himself is always the same: He consistently claims that He is the Messiah, the Savior of the world.

John 8:30 While he was saying these things, many believed in him.

People believed in Jesus, not the Pharisees and others, that Jesus was the Son of God and the true Messiah, as we know, faith comes by hearing.