Today is a very special day for the Church of God.  We are celebrating a birthday today.   Let us do a little role playing. We know from hind sight what will happen, but what if we lived then, during Disciples time.

Let us stop for a minute, think what it was like if we lived during the time of when Jesus died and His resurrection. Let’s think we are a disciple of Jesus and going through this with the rest of the disciples.  Remember, the men had no idea what was going to happen or the women had some idea before the resurrection.  Matthew 28, Mark 16, Luke 24, John 20 – Grave site 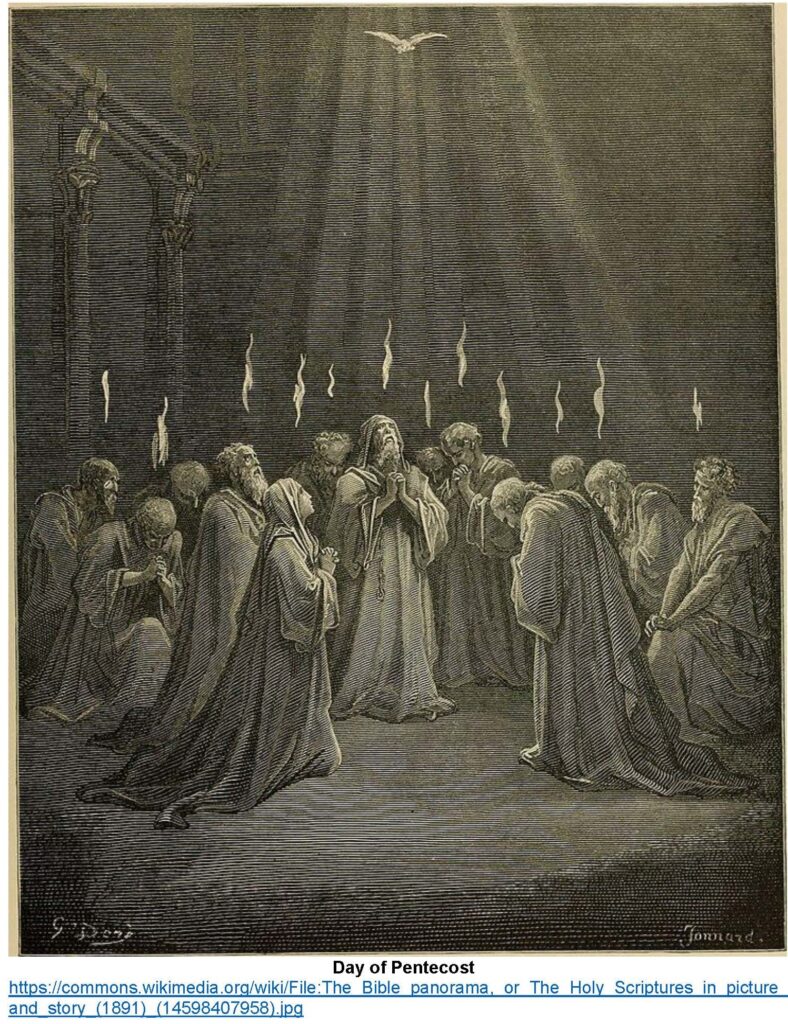 If we were there in person, would we really understand what this means, when Jesus said this.

John 14:26 But the Helper, the Holy Spirit, whom the Father will send in my name, will teach you all things and remind you of everything that I have told you.

Same questions, Spirit of Truth, testify on my behalf, what is that

What do you think the disciples thought when Jesus breathed on them in the upper room after His resurrection.

As indicates that the disciples were commissioned to carry on Christ’s work, not to begin a new one.  The ministry to which Jesus called the disciples requires spiritual power.  Matthew 28, Mark 16, Luke 24, John 20 – Grave site

When Jesus breathe on the disciples to receive the Holy Spirit, it reminds me how Jesus breathe life into the man. Yet the gift here was not a human spirit, but the Spirit of the living God.

Genesis 2:7 So the LORD God formed the man from the dust of the ground, breathed life into his lungs, and the man became a living being.

Luke 24:46-49 He told them, “This is how it is written: the Messiah was to suffer and rise from the dead on the third day, (47)  and then repentance and forgiveness of sins is to be proclaimed in his name to all the nations, beginning at Jerusalem.  (48)  You are witnesses of these things.  (49)  I am sending to you what my Father promised, so stay here in the city until you have been clothed with power from on high.”

Jesus just gave the disciples the Holy Spirit and will receive the power on the Day of Pentecost. Matthew 28, Mark 16, Luke 24, John 20 – Grave site

Comfort will be given, really what does this mean to them at the time.

If we had been in Jerusalem on that day we would have asked the same question, for something amazing had happened. Jerusalem was packed with people, many of whom were there to present the first-fruits of the harvest for the year; they would have come from many different places.

The Lord Jesus had completed His earthly ministry, having died, risen and ascended; but before going back to heaven He had given a command and a promise to His own disciples

Acts 1:3-5 After he had suffered, he had shown himself alive to them by many convincing proofs, appearing to them during a period of 40 days and telling them about the kingdom of God.  (4)  While he was meeting with them, he ordered them, “Don’t leave Jerusalem. Instead, wait for what the Father has promised, about which you heard me speak.  (5)  For John baptized with water, but you will be baptized with the Holy Spirit a few days from now.”

Pentecost was 50 days from Passover, now it was only 40 days, 10 days left for Pentecost.

Acts 1:13-14  When they came into the city, these men went to the upstairs room where they had been staying: Peter and John, James and Andrew, Philip and Thomas, Bartholomew and Matthew, James the son of Alphaeus and Simon the Zealot, and Judas the son of James.  (14)  With one mind all of them kept devoting themselves to prayer, along with the women, including Mary the mother of Jesus, and his brothers.

Where were Jesus sisters?  Just 11 of them.  Wonder, what other women.

Acts 1:15 At that time Peter got up among the brothers (there were about 120 people present) and said,

Then something very wonderful happened

Acts 2:1 When the day of Pentecost was being celebrated, all of them were together in one place.

Acts 2:2 Suddenly, a sound like the roar of a mighty windstorm came from heaven and filled the whole house where they were sitting.

It must have been very loud and windy to draw attention outside of the upper room.

Acts 2:3 They saw tongues like flames of fire that separated, and one rested on each of them.

Do you think, most of those in the upper room were baptize by John or Jesus before this time?  Remember, Jesus’ disciples baptize more than John.

John 4:1-2 Now when Jesus realized that the Pharisees had heard he was making and baptizing more disciples than John (2) although it was not Jesus who did the baptizing but his disciples

Acts 2:4 All of them were filled with the Holy Spirit and began to speak in other languages as the Spirit gave them that ability.

All of them were filled with the Holy Spirit.” These disciples of Jesus then began preaching the gospel in known languages (though unknown to themselves) so that people from foreign countries heard God’s message in their own native tongue.

Acts 2:5-6 Now devout Jews from every nation were living in Jerusalem.  (6)  When that sound came, a crowd quickly gathered, startled because each one heard the disciples speaking in his own language.

Acts 2:7-8 Stunned and amazed, they asked, “All of these people who are speaking are Galileans, aren’t they?  (8)  So how is it that each one of us hears them speaking in his own native language:

Speaking Galileans, was it only the Disciples speaking.

Acts 2:12 All of them continued to be stunned and puzzled, and they kept asking one another, “What can this mean?”

This generation saw Jesus died on the cross, rose from the dead and ascended and went back to the right-hand of God.

Galatians 4:4-6 But when the set time had fully come, God sent his Son, born of a woman, born under the law, (5)  to redeem those under the law, that we might receive adoption to sonship.  (6)  Because you are his sons, God sent the Spirit of his Son into our hearts, the Spirit who calls out, “Abba, Father.”   {Jesus was born under law and of woman}

Jesus has sent the Holy Spirit to live within and to empower His own people, who are called to be Saints and the second chapter of Acts records this.

Leviticus 23:15-16 “Starting the day after the Sabbath, count for yourselves seven weeks from the day you brought the sheaf of wave offering. They are to be complete.  (16)  Count fifty days to the day after the seventh Sabbath, then bring a new meal offering to the LORD.

Acts 2:13-14 But others kept saying in derision, “They’re drunk on sweet wine!”  (14)  Then Peter stood up among the eleven apostles and raised his voice to address them: “Men of Judea and everyone living in Jerusalem! You must understand something, so pay close attention to my words.

Acts 2:15-17 These men are not drunk as you suppose, for it’s only nine o’clock in the morning.  (16)  Rather, this is what was spoken through the prophet Joel: (17) ‘In the last days, God says, I will pour out my Spirit on everyone. Your sons and your daughters will prophesy, your young men will see visions, and your old men will dream dreams.

The Lord Will Pour Out His Spirit

Pentecost was the first fulfilment of Joel’s prophecy which had been made 850 years previously.

Joel 2:28-31 “Then it will come about at a later time that I will pour out my Spirit on every person. Your sons and your daughters will prophesy. Your elderly people will dream dreams, and your young people will see visions.  (29)  Also at that time I will pour out my Spirit upon men and women servants.  (30)  I will display warnings in the heavens, and on the earth blood, fire, and columns of smoke.  (31)  The sun will be given over to darkness, and the moon to blood, before the coming of the great and terrifying Day of the LORD {Time period here}

John 7:38-39 The one who believes in me, as the Scripture has said, will have rivers of living water flowing from his heart.”  (39)  Now he said this about the Spirit, whom those who were believing in him were to receive, because the Spirit was not yet present and Jesus had not yet been glorified.     Matthew 28, Mark 16, Luke 24, John 20 – Grave site

John 14:16-17 I will ask the Father to give you another Helper, to be with you always.  (17)  He is the Spirit of truth, whom the world cannot receive, because it neither sees him nor recognizes him. But you recognize him, because he lives with you and will be in you.

Jesus promised that He would come to indwell all Christians, and at Pentecost that is exactly what happened

All of them were filled with the Holy Spirit”

Since that day, immediately someone becomes a Christian the Holy Spirit takes up residence; this is the distinctive mark of a real Christian or Believer

1 Corinthians 6:19 You know that your body is a sanctuary of the Holy Spirit who is in you, whom you have received from God, don’t you? You do not belong to yourselves,

How can the Believer live by the fruits of the Spirit.

Zechariah 4:6 Then he replied to me, “This is this message from the LORD to Zerubbabel: ‘Not by valor nor by strength, but only by my Spirit,‘ says the LORD of the Heavenly Armies.

Galatians 5:22-23 But the fruit of the Spirit is love, joy, peace, patience, kindness, goodness, faithfulness, (23) gentleness, and self-control. There is no law against such things.

John 16:13 Yet when the Spirit of Truth comes, he will guide you into all truth. He will not speak on his own accord, but will speak whatever he hears and will declare to you the things that are to come

The Holy Spirit would not compel or carry anyone into truth.

We need to do our part and study the Scriptures.

The Holy Spirit would lead us and we are to follow.

All truth refers to the truth necessary to be mature Saints and to be totally equipped servants.

2 Timothy 3:16-17 All Scripture is God-breathed and is useful for teaching, for reproof, for correction, and for training in righteousness, (17) so that the man of God may be complete, thoroughly equipped for every good action.

And finally, Peter said sermon brings out this important information

Acts 2:21 And everyone who calls on the name of the Lord will be saved.’

What an amazing thing to be saved having the Holy Spirit, the Comforter dwelling in the Believer.

Acts 2:41 Those who accepted his {Peter} message were baptized, and about three thousand were added to their number that day.

That day was the Day of Pentecost.  This is only the start of growing the Body of Jesus, look what we have to look forward to.  Let us enjoy this birthday today.   We need cake and ice cream to celebrate this day.