The raising of Lazarus is found only in the Gospel of John. Before the final week, we have a special witness to Jesus Glory.

The Death of Lazarus, a Request was sent to Jesus from Martha and Mary

To me, this resurrection of Lazarus was the greatest miracle of a dead person and witness to the Jewish Leaders that Lord Jesus is God and is the Son of God. 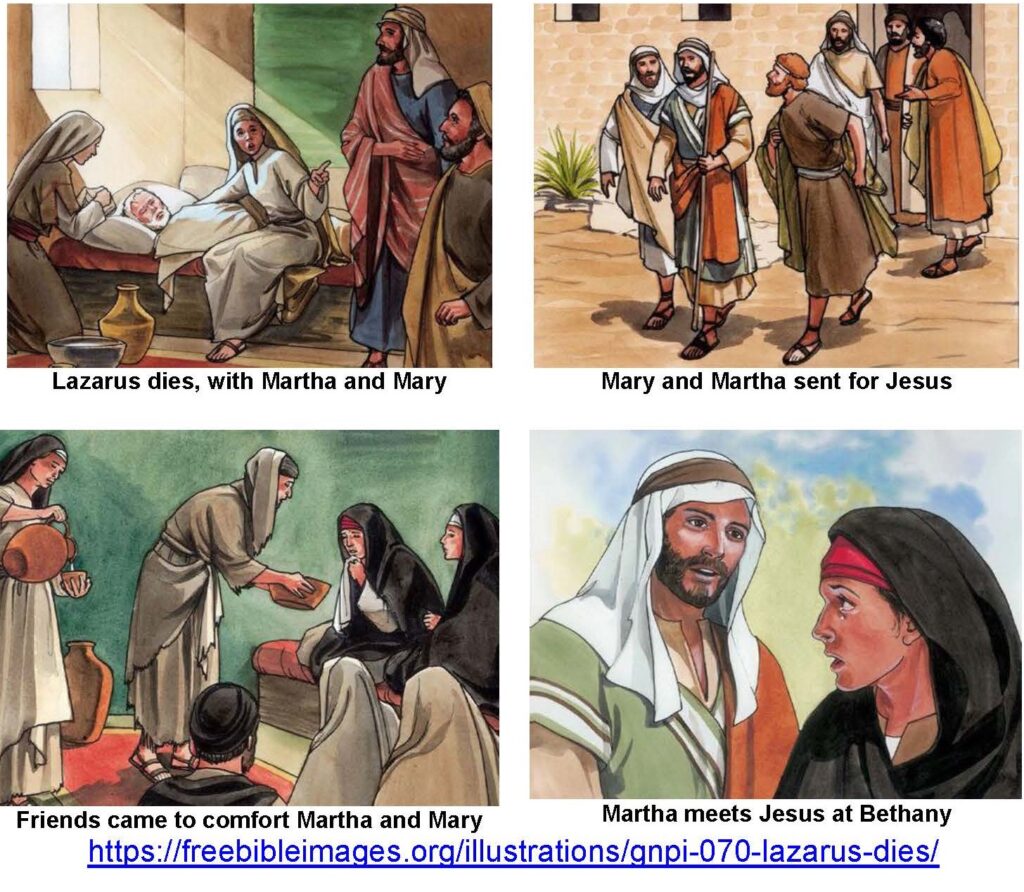 We find out that Lazarus had died, living with his sisters Mary and Martha.

In the disciple’s mind, for Jesus to go back to Judea would mean death.

Jesus decides to go to Judea and Jerusalem.

John 11:8 The disciples told him, “Rabbi, the Jews were just now trying to stone you to death, and you are going back there again?”

John 11:9 Jesus replied, “There are twelve hours in the day, aren’t there? If anyone walks during the day he does not stumble, because he sees the light of this world.

John 11:10 But if anyone walks at night he stumbles, because the light is not in him.”

Important:  Jesus’s death could not take place but for the time appointed by the Father.

John 11:11 These were the things he said. Then after this he told them, “Our friend Lazarus has fallen asleep, but I am leaving to wake him up.”

Jesus just told the disciples that to raise Lazarus from the dead, for the resurrection of the dead is expressed by awaking them.

Death for the saint is restful sleep from the problems and concerns of this world and their assigned work is complete.

1 Corinthians 15:51 Listen, I tell you a mystery: We will not all sleep, but we will all be changed

1 Thessalonians 4:13-15 Brothers and sisters, we do not want you to be uninformed about those who sleep in death, so that you do not grieve like the rest of mankind, who have no hope.  (14)  For we believe that Jesus died and rose again, and so we believe that God will bring with Jesus those who have fallen asleep in him.  (15)  According to the Lord’s word, we tell you that we who are still alive, who are left until the coming of the Lord, will certainly not precede those who have fallen asleep.

The disciples are concern the Jews want to kill Jesus, they ask, if he will recover, why then go to Judea?

Sleep was regarded by the Jews, in sickness, as a favorable thing; hence it was said among them, “Sleep in sickness is a sign of recovery,

Total miscommunication between Jesus and His disciples.  Jesus was saying He was dead, and disciples thought he was only sleeping.

John 11:14 Then Jesus told them plainly, “Lazarus has died.

Jesus just told them in so many words and in a language the disciples now understood, Lazarus is dead.

Faith Lessons are developed gradually, in steps. The disciples, Martha, Mary, and Lazarus and especially you and me will develop faith. May this lesson not be wasted for His Saints.

Romans 1:17 For in the gospel God’s righteousness is being revealed from faith to faith, as it is written, “The righteous will live by faith.”

John 11:16 Then Thomas (also known as Didymus) {or Twin} said to the rest of the disciples, “Let us also go, that we may die with him.”

The Jews were so hostile when they left Jerusalem that they expect Jesus to be put to death.

I Am the Resurrection and the Life

Martha greets Jesus as He comes to Bethany.

John 11:17 When Jesus arrived, he found that Lazarus had already been in the tomb for four days.

Lazarus, Martha and Mary Has Many friends in Jerusalem and they came to comfort the women in their loss of their brother.  Jesus wanted many witnesses there, where some of the persons were of note and inhabitants of Jerusalem.

It seems like all of Jesus family and friends knew important people in Jerusalem.    Joseph with Pilate, John with the Priest, etc.

John 11:18 Now Bethany was near Jerusalem, about two miles away,

As a side: “Was” The Apostle John inference is that Bethany had been destroyed.  It seems like John wrote the Book of John after the destruction of Jerusalem and Bethany was destroyed in the siege of Jerusalem, using in past tense.

Interesting, no other writer speaks of places in the past tense.

Garden of Gethsemane Destroyed – Did you know about this?

John 18:1 After Jesus had said this, he went with his disciples across the Kidron valley to a place where there was a garden, which he and his disciples entered.

John 19:41 A garden was located in the place where he was crucified, and in that garden was a new tomb in which no one had yet been placed.

John 11:19 and many of the Jews had come to Martha and Mary to comfort them in the loss of their brother.

As a side, I read somewhere or hear in the past, the mourners had to have somewhere to sleep and eat.  This rich family takes of them and could afford this.

John 11:20 As soon as Martha heard that Jesus was coming, she went and met him, while Mary stayed at home.

Luke 10:39-40 She {Martha} had a sister named Mary, who sat down at the Lord’s feet and kept listening to what he was saying.  (40)  But Martha was worrying about all the things she had to do, so she came to him and asked, “Lord, you do care that my sister has left me to do the work all by myself, don’t you? Then tell her to help me.”

Many Jews”:  Greater number of witnesses. Impossible for the Sanhedrin to discredit this last great “sign” of the Messiah.

John 11:21 Then Martha said to Jesus, “Lord, if you had been here, my brother would not have died.

I am the resurrection and the life

Martha takes this as a general term about the reference to the final resurrection with all the Saints on the last day.  So we know Jesus taught about the resurrection and disciples understood this.

John 11:24 Martha told him, “I know that he will rise again in the resurrection on the last day.”

Revelation 20:5 The rest of the dead did not come back to life until the thousand years were over. This is the first resurrection.

Revelation 20:11-12 Then I saw a large, white throne and the one who was sitting on it. The earth and the heavens fled from his presence, and no place was found for them.  (12)  I saw the dead, both unimportant and important, standing in front of the throne, and books were open. Another book was opened—the Book of Life. The dead were judged according to their actions, as recorded in the books.