Jesus arrives, and Lazarus had died and already been in the tomb for four days.

Martha and Jesus were talking about the resurrection.

Martha then told Jesus, I know he will rise again on the last day. 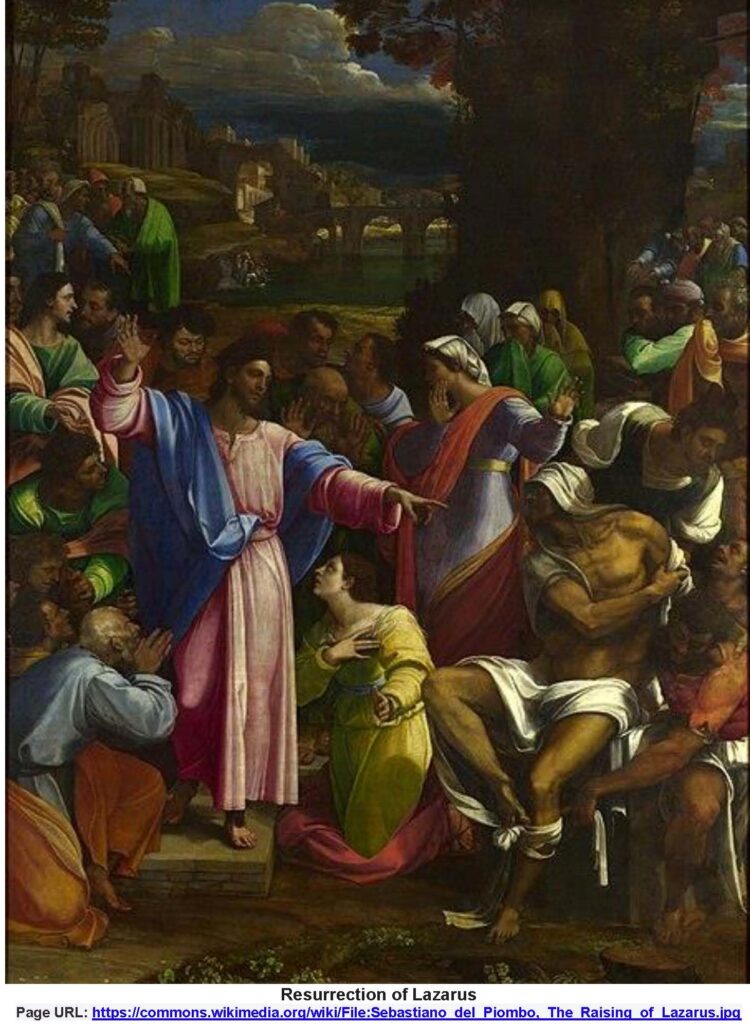 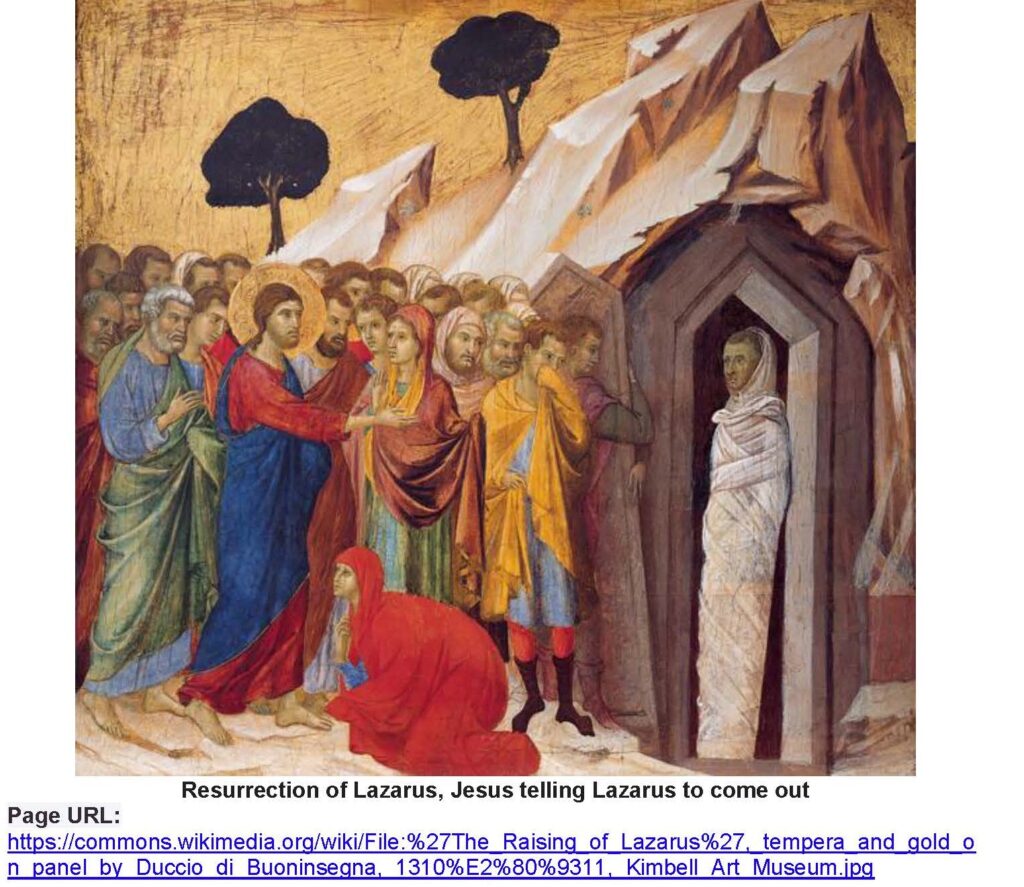 John 11:25 Jesus told her, “I am the resurrection and the life. The person who believes in me, even though he dies, will live.

Jesus said He is the resurrection for those who believed and are physically dead.   Salvation is by grace.

Romans 5:17 For if, through one man, death ruled because of that man’s offense, how much more will those who receive such overflowing grace and the gift of righteousness rule in life because of one man, Jesus the Messiah!

1 Corinthians 6:14 By his power God raised the Lord from the dead, and he will raise us also.

1 Thessalonians 4:14 For if we believe that Jesus died and rose again, even so through Jesus; God will bring those who have died with him.

John 11:26 Indeed, everyone who lives and believes in me will never die. Do you believe that?”

This is the one question we all have to answer from our heart and mouth.  Do we really believe that?  Jesus just asked Martha.

Jesus just challenged Martha to trust that He was the source of eternal life.

Believe this:  As long as there is hope, there is life

Do we have the belief and believe Jesus was who He said He was and that He could do what He said He could do.  We have to ask this of ourselves.

Matthew 9:28 When he had gone indoors, the blind men came to him, and he asked them, “Do you believe that I am able to do this?” “Yes, Lord,” they replied.

May I ask, Do we really believe this in the deepest of our hearts.

Jesus is the life for those who believe and have not yet died.

John 20:31 But these have been recorded so that you may believe that Jesus is the Messiah, the Son of God, and so that through believing you may have life in his name.

Matthew 16:16 Simon Peter answered, “You are the Messiah, the Son of the living God.”

John 11:28 When she had said this, she went away and called her sister Mary and told her privately, “The Teacher is here and is calling for you!”

John 11:29 As soon as Mary heard this, she got up quickly and went to him.

Notice Mary at once, arose and hastened out the place where the Lord was.

John 11:30 Now Jesus had not yet arrived at the village but was still at the place where Martha had met him.

John 11:31 When the Jews who had been with her, comforting her in the house, saw Mary get up quickly and go out, they followed her, thinking that she had gone to the tomb to cry {or weep} there.

John 11:32 As soon as Mary came to where Jesus was and saw him, she fell down at his feet and told him, “Lord, if you had been here, my brother would not have died.“

It seems like Mary, by her character, was at the feet of Jesus, and by her actions shows she believe Jesus was the Messiah. Some lack of faith?

Notice Mary said the same thing to the Jesus as Martha had. No doubt they had expressed this thought to one another often in the previous few days.

Just a thought, wonder how Jesus felt by what both women said.

Acts 9:39 So Peter got up and went with them. When he arrived, they took him upstairs. All the widows gathered around Peter, crying and showing him all the shirts and coats Dorcas had made while she was still with them.

John 11:33 When Jesus saw her crying, and the Jews who had come with her crying, he was greatly troubled in spirit and deeply moved.

Notice Jesus was deeply moved for the sisters and upset by the false weeping of His enemies, the Jews who followed her.

Jesus knew, by being God, where Lazarus was laid in the grave, being a little way off.  They {sisters} grief speaks in the fewest possible words.

Here in John 11:35:  This shows Jesus to be truly and really a man, subject to like passions that we have, only without sin.  This shows the Jesus as a friend, a tender friend, and demonstrates his character as a man.

Luke 19:41 As he approached Jerusalem and saw the city, he wept over it

At Mount of Olives {Gethsemane}, wept with blood in prayer: Not sure?

Luke 22:44 and having been in agony, he was more earnestly praying, and his sweat became, as it were, great drops of blood falling upon the ground.

Hebrews 5:7 As a mortal man, he offered up prayers and appeals with loud cries and tears to the one who was able to save him from death, and he was heard because of his devotion to God.

Jesus was a man of sorrows and acquainted with grief.

Isaiah 53:3 “He {Jesus} was despised and rejected by others, and a man of sorrows, intimately familiar with suffering; and like one from whom people hide their faces; and we despised him and did not value him.

Even the Jews visitors from Jerusalem, for this emotional testimony to the human tenderness of Jesus

John 11:37 But some of them said, “Surely the one who opened the eyes of the blind man could have kept this man from dying, couldn’t he?”

John 11:38 Groaning deeply again, Jesus came to the tomb. It was a cave, and a stone was lying in front of it.

Groaning not only through grief, just coming up to the grave, where his dear friend lay, but maybe through the holy anger and outrage at the hatred and wickedness of the Jews.

Having a private burial place in a cave indicates that the family was wealthy.

Graves in Palestine were caves in the rock, either natural or cut, and the mouth was closed by a great stone. Such graves are still seen there.

Matthew 27:59-60 So Joseph took the body and wrapped it in a clean linen cloth.  (60)  Then he placed it in his own new tomb, which he had cut out of the rock. After rolling a large stone across the door of the tomb, he left,

Rolling a great stone used as a door, usual method of closing a rock-cave tombs.

Jesus commands the stone to be removed.

John 11:39 Jesus said, “Remove the stone.” Martha, the dead man’s sister, told him, “Lord, there must be a stench by now, because he’s been dead for four days.”

Acts 13:36-37 “Now when David had served God’s purpose in his own generation, he fell asleep; he was buried with his ancestors and his body decayed.  (37)  But the one whom God raised from the dead did not see decay.

Jesus told her back in vs 25-26:  “I am the resurrection and the life. The person who believes in me, even though he dies, will live.  Indeed, everyone who lives and believes in me will never die. Do you believe that?”

Notice Jesus prays at the Tomb of Lazarus

John 11:41 Then they took away the stone from the place where the dead man was lying. And Jesus lifted up His eyes and said, “Father, I thank You that You have heard Me.

John 17:1 After Jesus had said this, he looked up to heaven and said, “Father, the hour has come. Glorify your Son, so that the Son may glorify you.

John 11:42 I know that you always hear me, but I have said this for the sake of the crowd standing here, so that they may believe that you sent me.”

Jesus said this so we might believe in Him and see the Glory of God fulfilled.

The Unbelief of the people,

John 12:37 Even after Jesus had performed so many signs in their presence, they still would not believe in him.

Jesus calls out Lazarus from the grave

John 11:43 After saying this, he shouted with a loud voice, “Lazarus, come out!”

This loud voice was either the result of strong emotion or in order that the multitude might hear, but with a loud decisive tone of Authority.

Someday in the future, all graves will open, the dead will brought to life

1 Thessalonians 4:16 For the Lord himself will come down from heaven, with a loud command, with the voice of the archangel and with the trumpet call of God, and the dead in Christ will rise first.

On one other occasion only did He this – on the cross. His last utterance was a “loud cry”

Matthew 27:50 And Jesus cried out again with a loud voice, and yielded up His spirit.

John 5:28 “Don’t be amazed at this, because the time is approaching when everyone in their graves will hear the Son of Man’s voice

Why did Jesus call for Lazarus to come out of the grave or cave, instead of going in to the cave.  Could it be the smell.

John 11:44 The man who had died came out, his hands and feet tied with strips of cloth, and his face wrapped in a handkerchief. Jesus told them, “Untie him, and let him go.”

Jesus commanded others to untie Lazarus as He commanded the stone to be removed.

Jesus like to use human instruments and always through His disciples to have things done.

Lazarus was dead and came forth by command: Jesus holds the keys of death, Hades and life.

How can any sheep of His ever perish when held in the Fathers and Jesus hands.