Matthew 24:12 Because of the increase of wickedness, the love of most will grow cold, 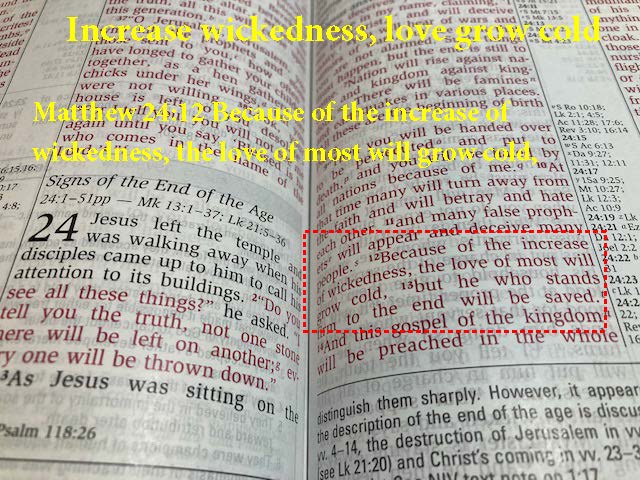 Jesus gave us 4, signs to the Saints of the End Times, what will happen to people

Matthew 24:9 “Then you will be handed over to be persecuted and put to death, and you will be hated by all nations because of me.

Matthew 24:10 At that time many will turn away from the faith and will betray and hate each other,

Matthew 24:11 Many false prophets will appear and deceive many people,

Matthew 24:12 Because of the increase of wickedness, the love of most will grow cold,

Matthew 24:13 But the person who endures to the end will be saved.

Believe in Jesus and Believe Jesus.  There is a difference.

We will cover these 4 points our Lord Jesus told about over the next few months.

Let’s start with number 4, Increase wickedness, love grow cold.  This was a part of His answer to the disciples’ question: “What will be the sign of your coming, and of the end of the age?”

Matthew 24:12 Because of the increase of wickedness, the love of most will grow cold,   {more wickedness, less love}

How can we be sure that the love we have for Lord Jesus will never grow cold? We begin by examining ourselves to be sure we are truly in the faith

2 Corinthians 13:5 Examine yourselves to see whether you are in the faith; test yourselves. Do you not realize that Christ Jesus is in you, unless, of course, you fail the test?   {what test}

Compare ourselves to see if we are walking and following the example and Words that Jesus has told us about.  Every Passover we are to examine ourselves.

If we truly belong to Christ, we can be confident that we possess the love from the Spirit that never grows cold. Cut out Wickedness from our lives.  Then we should make every effort to increase our love, as The Apostle Paul said:

Philippians 1:9-11 And this is my prayer, that your love will keep on growing more and more with full knowledge and insight,  (10)  so that you may be able to choose what is best and be pure and blameless until the day when the Messiah returns,  (11)  having been filled with the fruit of righteousness that comes through Jesus the Messiah so that God will be glorified and praised.

For those without the Holy Spirit, what love they do have will become colder and colder in the last days.

2 Timothy 3:1 You must realize, however, that in the last days difficult times will come.

2 Timothy 3:2 People will be lovers of themselves, lovers of money, boastful, arrogant, abusive, disobedient to their parents, ungrateful, unholy,

2 Timothy 3:4 traitors, reckless, conceited, and lovers of pleasure rather than lovers of God.

2 Timothy 3:5 They will hold to an outward form of godliness but deny its power. Stay away from such people.

1 Timothy 4:1 Now the Spirit says clearly that in the last times some people will abandon the faith by following deceitful spirits, the teachings of demons,

Paul is saying, people who say the love God is only in pretense, saying it is true, but not in reality.

OK, how can this really happen.

Just wondering, have you heard of the term, The Nones called for young people, under 30.

When Satan first deceive Adam and Eve, he did so by discrediting God and then they did sin and sent mortal people to eventual physical death.

Genesis 3:4-5 “You will not certainly die,” the serpent said to the woman.  (5)  “For God knows that when you eat from it your eyes will be opened, and you will be like God, knowing good and evil.”

Today, there are people who profess to worship Satan, are called Satanists. The people with the Satan behind them, they want to offend Jesus, The Messiah.  Satanists are in Hollywood.  Over 35 Satanic Temples in the United States.  a membership of 100,000 in 2016, because Trump was elected, membership jump up.  Metal and rock music groups

More and more people, especially former Christian, are now atheists, reject any belief in a god or any god.  Pew Research 2019.

Paul also said a great falling away from the church?

2 Thessalonians 2:3 Let no one deceive you by any means; for that Day will not come unless the falling away comes first, and the man of sin is revealed, the son of perdition,

We wonder why the nations will fight against Jesus when He returns to the earth, is it because they do not want to be under authority.

2 Peter 3:3-4 Above all, you must understand that in the last days scoffers will come, scoffing and following their own evil desires.  (4)  They will say, “Where is this ‘coming’ he promised? Ever since our ancestors died, everything goes on as it has since the beginning of creation.“

Romans 8:7-8 That is why the mind that focuses on human nature is hostile toward God. It refuses to submit to the authority of God’s Law because it is powerless to do so.  (8)  Indeed, those who are under the control of human nature cannot please God.

When people are asked about their religious groups in nationwide polls, more and more young people are declaring themselves to be “nones”, meaning that they refuse to affiliate with any religion, especially Christianity.

According to the Pew Poll, With few exceptions, though, the unaffiliated say they are not looking for a religion that would be right for them.

Overwhelmingly, they think that religious organizations are too concerned with money and power, too focused on rules and too involved in politics.

The number of Americans who do not identify with any religion continues to grow at a rapid pace. One-fifth of the U.S. public – and a third of adults under 30.

The rush to secularism and socialism is accelerating very fast in Colleges,

Example: Harvard University elected an avowed atheist to serve as its head chaplain.

The chaplain teaching students about the progressive movement that centers people’s relationships with one another instead of with God.

Progressive believe people can be good with God and total rejection of God.

Psalms 14:2-3 The LORD looks down from heaven on all mankind to see if there are any who understand, any who seek God.  (3)  All have turned away, all have become corrupt; there is no one who does good, not even one.

These modern-day pagans consider the God of the Bible to be an oppressive, patriarchal, white-privilege relic of the past that must be rejected and opposed.  They unknowing look to Satan’s false promise, you will be like gods.

Atheism {disbelief or lack of belief in the existence of God} in American is growing like a cancer.

Psalms 14:1 Fools say to themselves, “There is no God.” They are corrupt and commit evil deeds; not one of them practices what is good.

Here is what Paul thinks of this.

Romans 1:21-22 For although they knew God, they neither glorified him as God nor gave thanks to him, but their thinking became futile and their foolish hearts were darkened.  (22)  Although they claimed to be wise, they became fools.

So, what should we do as Saints of our Lord Jesus: stay rooted in Jesus who created us all.  Jesus will punish those who rejected Him.

Psalms 2:2 The kings of the earth take their stand And the rulers take counsel together Against the LORD and against His Anointed, saying,

Psalms 2:3 “Let us break their chains and throw off their shackles.”

Psalms 2:4-6 He who sits in the heavens laughs, The Lord scoffs at them.  (5)  Then He will speak to them in His anger And terrify them in His fury, saying,  (6)  “But as for Me, I have installed My King Upon Zion, My holy mountain.”

Paul wrote for us

Romans 1:24-25 Therefore God gave them over in the sinful desires of their hearts to sexual impurity for the degrading of their bodies with one another.  (25)  They exchanged the truth about God for a lie, and worshiped and served created things rather than the Creator, who is forever praised. Amen.

Romans 1:28-29 Furthermore, just as they did not think it worthwhile to retain the knowledge of God, so God gave them over to a depraved mind, so that they do what ought not to be done.  (29)  They have become filled with every kind of wickedness, evil, greed and depravity. They are full of envy, murder, strife, deceit and malice. They are gossips,   {does not have the love of God in them}

Romans 1:30-31 slanderers, God-haters, insolent, arrogant and boastful; they invent ways of doing evil; they disobey their parents;  (31)  they have no understanding, no fidelity, no love, no mercy.

Romans 1:32 Although they know God’s righteous decree that those who do such things deserve death, they not only continue to do these very things but also approve of those who practice them.

Let end with the way Apostle Paul tells us in view of Lord Jesus Second Coming:

Hebrews 10:24-25 And let us consider how we may spur one another on toward love and good deeds,  (25)  not giving up meeting together, as some are in the habit of doing, but encouraging one another, and all the more as you see the Day approaching.