From Now on – from this time onward, disciples kind of understand, Lord Jesus said.  The disciples begin to recognize the Father in Lord Jesus. 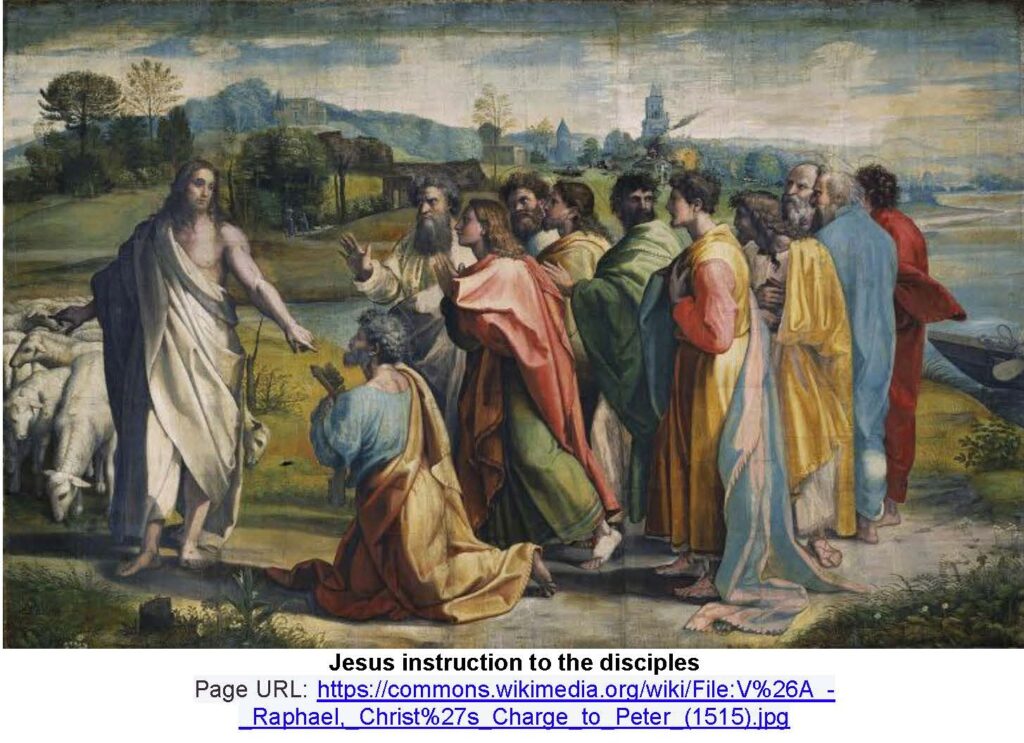 Where we left off:  Philip asked to see the Father. Like Thomas, Philip seems to have been slow to comprehend, as the rest of the disciples.

Now on – from this time onward, disciples kind of understand, Lord Jesus said.  The disciples begin to recognize the Father in Lord Jesus.

Remember, Peter, James, and John, saw Lord Jesus glory at the transfiguration on the mount, but Philip was not there and the other disciples had not seen the glory of God.

Jesus again explains His unity with and dependence on the Father

John 14:9 “Have I been with you all this time, Philip, and you still do not know me?” Jesus asked him. “The person who has seen me has seen the Father. So how can you say, ‘Show us the Father’?

Here he expresses the highest ambition any man can have, the highest desire expressed by any person in the whole Bible, “show us the Father.” Remember that the Greeks came to him, wanting to see Jesus.

Know me:  I would think that would hurt Philip when Lord Jesus gentile rebuke Philip.

John 14:10 You believe, don’t you, that I am in the Father and the Father is in me? The words that I say to you I do not speak on my own. It is the Father who dwells in me and who carries out his work.

The Apostle John wrote in His Gospel about Jesus: All the following is from the Book of John.

All along Jesus has been informing and enriching their needs with truths to “believe” about God.

There was words of a complete union of the personalities of the Son and the Father. We may never on earth comprehend fully its nature, but we can understand it to be so complete that he was the manifestation of God the Father in the flesh, of Lord Jesus.  Apostle Paul wrote:

Colossians 2:9-10 For in Christ all the fullness of the Deity lives in bodily form, (10) and in Christ you have been brought to fullness. He is the head over every power and authority.

John 14:11 Believe me when I say that I am in the Father and the Father is in me; or at least believe on the evidence of the works themselves.

You will notice that Jesus has been interrupt during His discourse. First it was Peter, then Thomas, and then Philip. But Jesus continues on in His discourse until verse 22 when He is again interrupted.

There were two grounds on which we might believe; one was his own testimony, the other was his works.

John 9:3-4 Jesus answered, “Neither this man nor his parents sinned. This happened so that God’s work might be revealed in him.  (4)  I must do the work of the one who sent me while it is day. Night is approaching, when no one can work.

Believe Jesus for the very work’s sake: meaning his miracle works, such as raising the dead, cleansing the lepers, causing the deaf to hear, and giving sight to the blind; Only God could ever perform could perform these works.

When Jesus departs to the Father, Jesus work will continue on earth by His Disciples and Saints.

John 14:12 “Most assuredly, I say to you, he who believes in Me, the works that I do he will do also; and greater works than these he will do, because I go to My Father.

How could He say that believers would do greater works?  Look at the conversion of thousands. The disciples were able to do this work because Christ would go to the Father and send the Holy Spirit to empower them

Jesus began the first of three assurances given to His disciples on the night of His departure. The first assurance answered their fear, “This was the end. They didn’t get fired; they got promoted, and promoted to greater things.

Believes in Me: Jesus just encouraged the disciples to trust in, rely on, and cling to Him in faith, because of who He is, the words He spoke, and the miracles He has done.

John 14:13 I will do whatever you ask in my name, so that the Father may be glorified in the Son.

This is where Jesus commands us in prayer to ask or through Lord Jesus name.

Effective prayer is in Jesus name, as mediator. This is prayer in agreement with the desires of Christ. The result of prayer is the glorification of the Father, not self-glorification.

Notice here Jesus says you can pray to me for there things.

John 16:23-24 On that day, you will not ask me for anything. Truly, I tell all of you with certainty, whatever you ask the Father for in my name, he will give it to you.  (24)  So far you haven’t asked for anything in my name. Keep asking and you will receive, so that your joy may be complete.”

What does it mean to ask in the name of Christ?

My prayer is in agreement with the desires of Christ.

It means to be fully identified with and calling upon Jesus, what was according to the will of God when we stand before God

The Father hears our prayers when they are in the name of Jesus. This is not just a little phrase that we tag on to the end of our prayer closing with “in Jesus’ name.”

Praying in His name is presenting it in His merit and for His glory.

Jesus departs, He Promises to send the Holy Spirit, a change of subject

Jesus had just demonstrated His remarkable love to the disciples by washing their feet. He told them what their loving response should be; to keep His commandments.

This verse to me is very hard for people and the Saints to understand.

Showing Love to Jesus is not sentimental, emotionalism; it is obedience to the commandments of God.  This According to the Apostle John.

Jesus and the Father commandments. Not merely the ten commandments, but moreover and especially the doctrines and teachings of Jesus and from the Scriptures.

Jesus commanded them to love one another after the pattern of His love to them   {John 13:34}

Jesus commanded them to put their faith in God the Father and in Jesus Himself   {John 14:1}

It is wonderful when our love for Jesus has sentiment and passion, but it must always be connected to keeping His commandments, or it isn’t love at all.

When we see individuals say, we love Jesus, they then pick and choose which commands or commandments to observe in their lives.  Obedience is the fruit of love.

1 John 2:3 This is how we can be sure that we have come to know him: if we continually keep his commandments.

1 John 2:4 The person who says, “I have come to know him,” but does not continually keep his commandments is a liar, and the truth has no place in that person.

1 John 2:5 But whoever continually keeps his commandments is the kind of person in whom God’s love has truly been perfected. This is how we can be sure that we are in union with God:

I have heard and read about individuals say, “I really love Jesus. But I just don’t want Him to tell me how to live my life or do not want to attend church, or etc.”

The thing we have to remember, about keeping Jesus commands,

John 14:16 I will ask the Father to give you another Helper, to be with you always.

The Father will give the Saints the Holy Spirit, the Helper, and will be with us for the rest of our physical and spiritual life

1 John 2:1 My dear children, I write this to you so that you will not sin. But if anybody does sin, we have an advocate with the Father, Jesus Christ, the Righteous One.

John only use this word, advocate, comforter or helper.  The term, another Helper, means Jesus if the Main helper until the Holy Spirit is given.

This is the second assurances, The disciples feared Jesus was abandoning us.  Jesus gives comfort to the disciples explaining He will send the Holy Spirit and they would have more help.

John 14:17 He is the Spirit of truth, whom the world cannot receive, because it neither sees him nor recognizes him. But you recognize him, because he lives with you and will be in you.

The Holy Spirit was here on earth before Pentecost, but on the Day of Pentecost He came with power to indwell believers. This is a unique fact of this age in which we are living. That was the thing which was new.

1 John 4:6 We belong to God. The person who knows God listens to us. Whoever does not belong to God does not listen to us. This is how we know the Spirit of truth and the spirit of deceit.

Spirit of truth, we know is Jesus; and the spirit of deceit is Satan

The Spirit of God is active in the world, but His acts go unnoticed by the world, who are under the influence of the things of this world: pride, ambition, and pleasure; all who are not Christians, and especially all who are addicted to gross vices and pursuits,

The Spirit of God is active in the world, but His acts go unnoticed by the world

1 Corinthians 2:14-15 A person who isn’t spiritual doesn’t accept the things of God’s Spirit, for they are nonsense to him. He can’t understand them because they are spiritually evaluated.  (15)  The spiritual person evaluates everything but is subject to no one else’s evaluation.

Holy Spirit only dwells in a heart prepared for him by faith and obedience. “God gives the Holy Spirit to them who obey him”

Acts 5:32 We are witnesses of these things, and so is the Holy Spirit, whom God has given to those who keep on obeying him.”

Hebrews 2:4 God also testified to it by signs, wonders and various miracles, and by gifts of the Holy Spirit distributed according to his will.

John 14:18 I am not going to forsake you like orphans. I will come back to you.

This is the 3rd assurance the disciples feared.  The discipleship program is not over, it has only been started and not finished.

Jesus promises that he would not leave them fatherless.  He would come back to them. There could be 3 different ways Jesus could be referring to:

Galatians 4:6 Now because you are his children, God has sent the Spirit of his Son into our hearts to cry out, “Abba! Father!”