Matthew 3 covers John the Baptist and Lord Jesus being baptize for righteousness.

John the Baptist, somewhere around A.D.26. What do we know about John.

Matthew 11:11 Truly I tell you, among those born of women there has not risen anyone greater than John the Baptist; yet whoever is least in the kingdom of heaven is greater than he.

Matthew 11:13 For all the Prophets and the Law prophesied until John.     {Last Old Testament Prophet}

John 10:41 And many resorted unto him, and said, John did no miracle: but all things that John spoke of this man {Jesus} were true.

John the Baptist was in prison in the fortress of Machaerus because he had courageously denounced the adulterous marriage of Herod Antipas and Herodias.  They killed him by cutting his head off.

Luke 1:15 For he will be great in the sight of the Lord and shall drink neither wine nor strong drink. He will also be filled with the Holy Spirit, even from his mother’s womb.   {Was he a Nazarite? No proof} 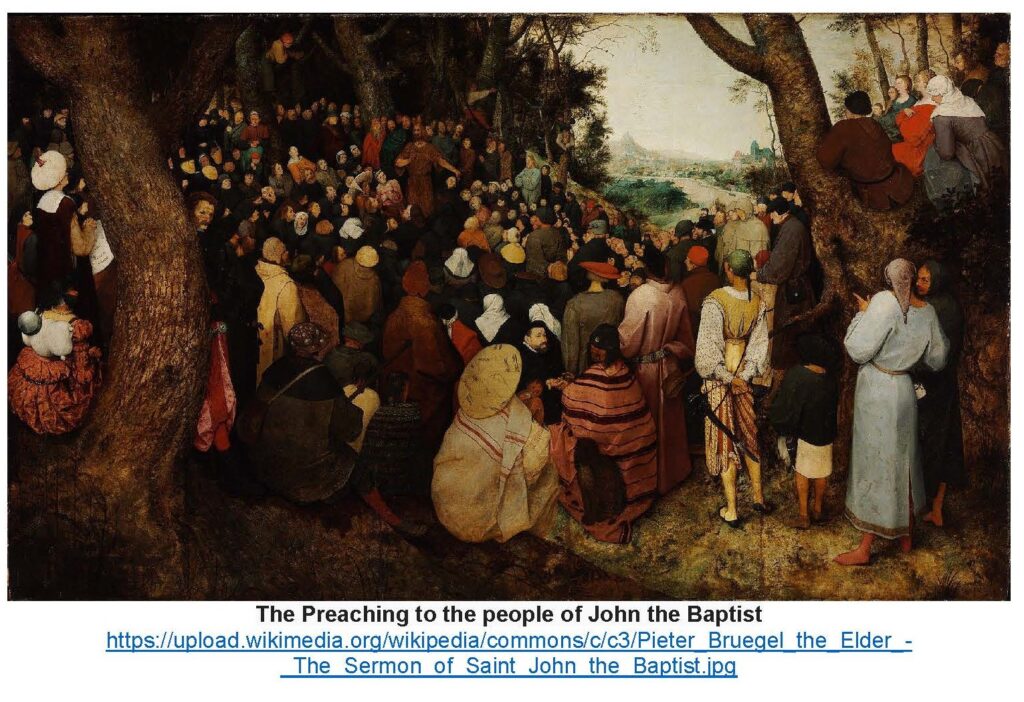 Matthew 3:1 In those days John the Baptist came, preaching in the wilderness of Judea

John did more than baptizing, but he preach about the Kingdom of Heaven.

Matthew 3:2 and saying, “Repent, for the kingdom of heaven has come near.”

Notice what Lord Jesus was preaching about, same as John

Matthew 4:17 From that time Jesus began to preach and to say, “Repent, for the kingdom of heaven is at hand.”

We see John message was a call to repentance, a call to action, making a change of the mind, not merely to feel sorry for what they had done.  A change of direction in lifestyle.  A New Way of Life.

If the kingdom of heaven is at hand, then we must get ready now

Matthew 3:3 This is he who was spoken of through the prophet Isaiah: “A voice of one calling in the wilderness, ‘Prepare the way for the Lord, make straight paths for him.'”

About 30 years have passed between Chapters 2 and 3.

John the Baptist was born into the priesthood, born to Zacharias and Elisabeth in their old age. He is preaching out of the camp {Jerusalem}, in the desert as he must have been rejected by the Jewish Leadership.   John fulfills Isaiah prophecy.

Isaiah 40:3-5 The voice of one crying in the wilderness: “Prepare the way of the LORD; Make straight in the desert A highway for our God.  (4)  Every valley shall be exalted And every mountain and hill brought low; The crooked places shall be made straight And the rough places smooth;  (5)  The glory of the LORD shall be revealed, And all flesh shall see it together; For the mouth of the LORD has spoken.”

The idea was to build up a great road {repaired, smoothed, straightened, and leveled} for the arrival of Lord Jesus, our King and to fill in the holes and knock down the hills that are in the way

Matthew 3:4 John’s clothes were made of camel’s hair, and he had a leather belt around his waist. His food was locusts and wild honey.

John also dressed like Elijah. John ate locusts and wild honey.  May have their mantle. {similar to covering, jacket}

2 Kings 1:8 So they answered him, “A hairy man wearing a leather belt around his waist.” And he said, “It is Elijah the Tishbite.”

Matthew 3:5 People went out to him from Jerusalem and all Judea and the whole region of the Jordan.

This term is repented 2 times, meaning that a great many people go out to see John the Baptist.

Mark 1:5 Then all the land of Judea, and those from Jerusalem, went out to him and were all baptized by him in the Jordan River, confessing their sins.

Matthew 3:6 Confessing their sins, they were baptized by him in the Jordan River.

John completely immersed in water those he baptized

Then Jerusalem, all Judea, and all the region around the Jordan went out to him: John’s ministry met with wonderful response. There were many people who recognized their sinfulness, their need to get ready for the Messiah, and were willing to do something about it.

Remember, the Jewish leadership were upset that John was baptizing individual without their official approval.  They are the only ones that can baptize gentiles and others.

John is testifying to Jesus’ preexistence before birth: He was Jesus’ cousin, three months older.

John 1:15 John bore witness of Him and cried out, saying, “This was He of whom I said, ‘He who comes after me is preferred before me, for He was before me.’ “

Matthew 3:7 But when he saw many of the Pharisees and Sadducees come to his baptism, he said unto them, O generation of vipers, who hath warned you to flee from the wrath to come?

The people and the Jewish leaders had to walk at least 20 miles from Jerusalem to hear John the Baptist.  We would look at this as an overnighter, with food and place to stay.

This is our introduction to these two important groups in first-century Judaism. These two groups were very different and often in conflict. Together they represented the leadership of Judaism

Generation of vipers”: To a Pharisee this refers to Gen 3:15, the seed of the serpent. He is calling them the sons of Satan!

Genesis 3:15 And I will put enmity Between you and the woman, And between your seed and her Seed; He shall bruise your head, And you shall bruise His heel.”

Philippians 1:11 being filled with the fruits of righteousness which are by Jesus Christ, to the glory and praise of God.

Matthew 3:9 And do not think you can say to yourselves, ‘We have Abraham as our father.‘ I tell you that out of these stones God can raise up children for Abraham.

It was widely taught in that day that Abraham’s merits were plenty for any Jew’s salvation and that a Jewish person couldn’t go to hell.

Pharisees: “separatists”; the legalists, the ritualists, out of them came the traditions of the Talmudic Jew.

Sadducees: liberalists, rationalists, “reformed” (modernists, humanists) who denied the inspiration of the Word and didn’t believe in the resurrection (so they were “sad, you see.”).

Matthew 3:10 The ax is already at the root of the trees, and every tree that does not produce good fruit will be cut down and thrown into the fire.

John likened his ministry to the ax of God clearing His orchard of dead wood, especially that which did not bear the fruit of repentance.  Scary for those who have the spirit in man.

Matthew 3:11 “I baptize you with water for repentance. But after me comes one who is more powerful than I, whose sandals I am not worthy to carry. He will baptize you with the Holy Spirit and fire.

John warns them to prepare for the Messiah’s coming, because He is coming with judgment. The Jews thought that the Messiah would come with judgment, but only against Israel’s enemies

Remember, Holy Spirit was not given in general until after Jesus’ resurrection on the Day of Pentecost.  Baptize with fire when the earth is cleaned of the wicked.

Acts 19:4 Then Paul said, “John indeed baptized with a baptism of repentance, saying to the people that they should believe on Him who would come after him, that is, on Christ Jesus.”

Acts 19:5-6 When they heard this, they were baptized in the name of the Lord Jesus.  (6)  And when Paul had laid hands on them, the Holy Spirit came upon them, and they spoke with tongues and prophesied.

Matthew 3:12 His winnowing fork {fan} is in his hand, and he will clear his threshing floor, gathering his wheat into the barn and burning up the chaff with unquenchable fire.”

The wicked is the chaff and stubble

Malachi 4:1 “For behold, the day is coming, Burning like an oven, And all the proud, yes, all who do wickedly will be stubble. And the day which is coming shall burn them up,” Says the LORD of hosts, “That will leave them neither root nor branch.

The Baptism of Jesus

Matthew 3:13 Then Jesus came from Galilee to the Jordan to be baptized by John.

Did this include those Jesus has called as His disciples.

Matthew 3:14 But John tried to deter him, saying, “I need to be baptized by you, and do you come to me?”

John recognized the irony in this situation. Jesus had nothing to repent of, and it would be more appropriate for Jesus to baptize John

Matthew 3:15 Jesus replied, “Let it be so now; it is proper for us to do this to fulfill all righteousness.” Then John consented.

Matthew 3:16 As soon as Jesus was baptized, he went up out of the water. At that moment heaven was opened, and he saw the Spirit of God descending like a dove and alighting on him.

Luke 3:22 And the Holy Spirit descended in bodily form like a dove upon Him {Lord Jesus}, and a voice came from heaven which said, “You are My beloved Son; in You I am well pleased.”

John 1:32-34 And John bore witness, saying, “I saw the Spirit descending from heaven like a dove, and He remained upon Him.  (33)  I did not know Him, but He who sent me to baptize with water said to me, ‘Upon whom you see the Spirit descending, and remaining on Him, this is He who baptizes with the Holy Spirit.’  (34)  And I have seen and testified that this is the Son of God.”

This verses indicates that John the Baptist saw this phenomenon and understood what it meant.

Is this similar to Pentecost.  The Law and the prophets were until John the Baptist. John is the last of the Old Testament prophets.

Matthew 3:17 And a voice from heaven said, “This is my Son, whom I love; with him I am well pleased.”

This was God’s official recognition to the people of Jesus as the Messiah.