The real Lord’s Prayer; This is the longest recorded personal prayer of our Lord Jesus and portrays Jesus’ Intercession 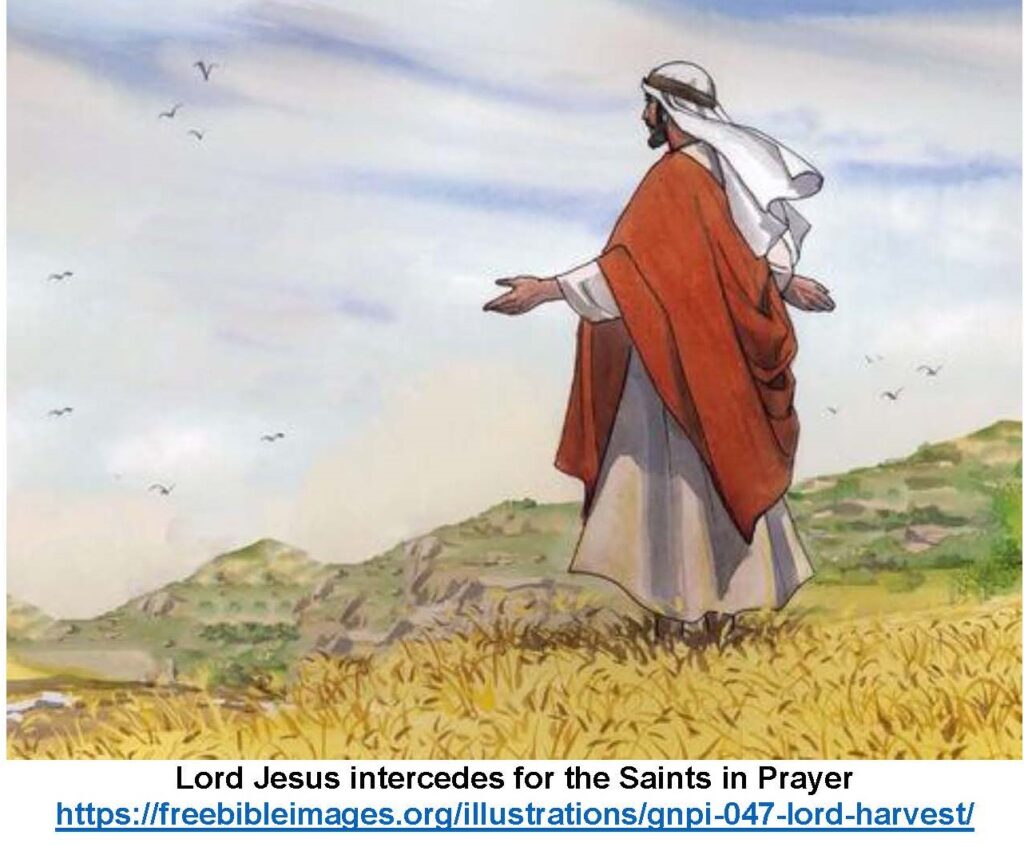 Hebrews 7:25 Therefore he is able to save completely those who come to God through him, because he always lives to intercede for them.

Jesus as he talks to his Father. It is the most understanding passage in language, but the most profound in meaning in the New Testament.

Lord Jesus is broken down into 3 sections

Glorification of the Son, we see what He was thinking and what is in His heart.  It was time for Jesus to die on the cross, has arrived.  Why, to glorify the Father and to forgiveness of sins and give eternal life to all those who believe in the Father’s Son.

John 17:1 Jesus spoke these words, lifted up His eyes to heaven, and said: “Father, the hour has come. Glorify Your Son, that Your Son also may glorify You,

John 12:28 Father, glorify Your name.” Then a voice came from heaven, saying, “I have both glorified it and will glorify it again.“

Now Jesus stops speaking to the disciples, and He speaks to the Father, for our benefit and theirs, the Disciples.

“Glorify your Son” is the only personal petition in this prayer

Believers will experience an eternal life of joy with God

Matthew 25:46 And these will go away into everlasting

punishment, but the righteous into eternal life.”

Jesus has complete control over all events

John 5:22 For the Father judges no one, but has committed all judgment to the Son,

Ephesians 1:19-20 and what is the exceeding greatness of His power toward us who believe, according to the working of His mighty power  (20)  which He worked in Christ when He raised Him from the dead and seated Him at His right hand in the heavenly places,

Ephesians 1:21-23 far above all principality and power and might and dominion, and every name that is named, not only in this age but also in that which is to come.  (22)  And He put all things under His feet, and gave Him to be head over all things to the church,  (23)  which is His body, the fullness of Him who fills all in all.

John 17:3 And this is eternal life, that they may know You, the only true God, and Jesus Christ whom You have sent.  {Father sent}

Jesus is the Only true God, {vs false god}, strong statement.  Not a definition of eternal life, but the purpose and source of eternal life or manner that it is to be obtained, Father and Son, Lord Jesus.

John 14:6 Jesus said to him, “I am the way, the truth, and the life. No one comes to the Father except through Me.

Eternal life consists of a growing knowledge of the only true God, as opposed to false gods

1 John 5:20 We know also that the Son of God has come and has given us understanding, so that we may know him who is true. And we are in him who is true by being in his Son Jesus Christ. He is the true God and eternal life.

John 17:4 I have glorified You on the earth. I have finished the work which You have given Me to do.

Jesus just said, He has already done for each of us.  Our Salvation, eternal life.  The work is meant, obedience to the will of the Father

John 5:36 But I have a greater witness than John’s; for the works which the Father has given Me to finish; the very works that I do;  bear witness of Me, that the Father has sent Me.

Restoration of His original glory, return to the right hand of the Father

John 17:5 And now, O Father, glorify Me together with Yourself, with the glory which I had with You before the world was.

Jesus, the Word is prepared to return to His proper place

John 1:2-3 He was in the beginning with God. (3) All things were made through Him, and without Him nothing was made that was made.

John 17:6 “I have manifested Your name {Father’s name} to the men whom You have given Me out of the world. They were Yours, You gave them to Me, and they have kept Your word.

The Name of God is more than a title: it’s means by which Father revealed His very nature and attributes

John 17:7 Now they have known that all things which You have given Me are from You.

The disciples have been taught that and have believed it.

They are assured that all my instructions are of the Father.

John 5:30 I can of Myself do nothing. As I hear, I judge; and My judgment is righteous, because I do not seek My own will but the will of the Father who sent Me.

John 17:9 “I pray for them. I do not pray for the world but for those whom You have given Me, for they are Yours.

Notice, Jesus is only praying for the Saints, not the world.

John 17:10 And all Mine are Yours, and Yours are Mine, and I am glorified in them.

The more we glorify Jesus {acknowledges before others}, the more intercession for each of us {Jesus acknowledges us before the Father}

Matthew 10:32 “Whoever acknowledges me before others, I will also acknowledge before my Father in heaven.

Protection of His disciples and future believers

John 17:11 Now I am no longer in the world, but these are in the world, and I come to You. Holy Father, keep through Your name those whom You have given Me, that they may be one as We are.

Holy Father is the only place in the Scriptures this is used, in the Jesus Prayer.  Our security is now the responsibility is passed on to the Father

John 17:12 While I was with them in the world, I kept them in Your name. Those whom You gave Me I have kept; and none of them is lost except the son of perdition, that the Scripture might be fulfilled.

2 Thessalonians 2:3 Let no one deceive you by any means; for that Day will not come unless the falling away comes first, and the man of sin is revealed, the son of perdition,

Used here for the only the Antichrist, did the disciples know Judas had betrayed Jesus at this time.   I do not think so, only when they took Jesus later that night.

John 17:13 But now I come to You, and these things I speak in the world, that they may have My joy {His own Joy} fulfilled in themselves.

The joy of fellowship with the Father.

Galatians 4:6-7 And because you are sons, God has sent forth the Spirit of His Son into your hearts, crying out, “Abba, Father!”  (7)  Therefore you are no longer a slave but a son, and if a son, then an heir of God through Christ.

When are the sheep fed?  First thing in the morning

Isaiah 50:4 “The LORD God has given me a learned tongue, so that I may know how to sustain the weary with words. And morning after morning he wakens, and he wakens my ear to listen like those who are being taught.

The Father does not want to take us out of the world, because the Father gets more glory by leaving us here.

Three of the only prayers not granted to the saints recorded in Scripture are the prayers of Moses, Elijah, and Jonah to be “taken out of the world.

“Keep them from evil”: That the Father should “keep us” shows that it is not within our power to keep ourselves from the evil one.

1 Corinthians 10:13 No temptation has overtaken you except such as is common to man; but God is faithful, who will not allow you to be tempted beyond what you are able, but with the temptation will also make the way of escape, that you may be able to bear it.

Matthew 6:13 And do not lead us into temptation, But deliver us from the evil one. For Yours is the kingdom and the power and the glory forever. Amen.

Sanctification means to be set apart for holy use

John 17:17 Sanctify them by Your truth. Your word is truth.

1 Thessalonians 5:23 Now may the God of peace Himself sanctify you completely; and may your whole spirit, soul, and body be preserved blameless at the coming of our Lord Jesus Christ.

Sanctify them means to consecrate or set apart a person or thing to God, render pure or to cleanse from sin, to make holy

Sanctified by the Father

Jude 1:1 Jude, a bondservant of Jesus Christ, and brother of James, to those who are called, sanctified by God the Father, and preserved in Jesus Christ:

Sanctified by the Son, Lord Jesus

Hebrews 10:10 By that will we have been sanctified through the offering of the body of Jesus Christ once for all.

Sanctified by the Spirit

1 Peter 1:2 elect according to the foreknowledge of God the Father, in sanctification of the Spirit, for obedience and sprinkling of the blood of Jesus Christ: Grace to you and peace be multiplied.

John 17:19 And for their sakes I sanctify Myself, that they also may be sanctified by the truth.  {Jesus self-sacrifice and total commitment}

John 17:20 “I do not pray for these alone, but also for those who will believe in Me through their word;

Jesus not only prayed for those the Father had given Him but for all future believers; Future body of Believers

John 17:21 that they all may be one, as You, Father, are in Me, and I in You; that they also may be one in Us, that the world may believe that You sent Me.

Not a union of believers, but rather a spirit of unity among believers. The loving relationship of believers to each other is the greatest witness for Lord Jesus

John 17:22 And the glory {His own glory} which You gave Me I have given them, that they may be one just as We are one:

John 17:23 I in them, and You in Me; that they may be made perfect in one, and that the world may know that You have sent Me, and have loved them as You have loved Me.

Romans 8:17 and if children, then heirs; heirs of God and joint heirs with Christ, if indeed we suffer with Him, that we may also be glorified together.

John 17:24 “Father, I desire that they also whom You gave Me may be with Me where I am, that they may behold My glory which You have given Me; for You loved Me before the foundation of the world.

John 14:3 And if I go and prepare a place for you, I will come again and receive you to Myself; that where I am, there you may be also.

John 17:25 O righteous Father! The world has not known You, but I have known You; and these have known that You sent Me.  {disciples}

John 17:26 And I have declared to them Your name {Father’s name}, and will declare it, that the love with which You loved Me may be in them, and I in them.”