The “Name of God” does not appear in this book.  Esther means, “Something hidden.”  The book mentions fasting, but not prayer.

We meet a new player in this chapter, Haman.

Had Saul been obedient, Haman could never have appeared on the scene.

Samuel showed Agag no mercy; but some of his children escaped him.

We covered Shimei in detail last time in Chapter 2.

This is interesting how God works for His plan for mankind.

Haman Plots Against the Jews, about 453 BC

Esther 3:1 After these events, King Xerxes honored Haman son of Hammedatha, the Agagite, elevating him and giving him a seat of honor higher than that of all the other nobles.

The king had a number of princes from his many lower wives.

Esther 3:2 All the royal officials at the king’s gate knelt down and paid honor to Haman, for the king had commanded this concerning him. But Mordecai would not kneel down or pay homage honor.  {reverence him}

This was somewhat similar to what was commanded of the three Hebrew young men in Daniel 3:8-15. 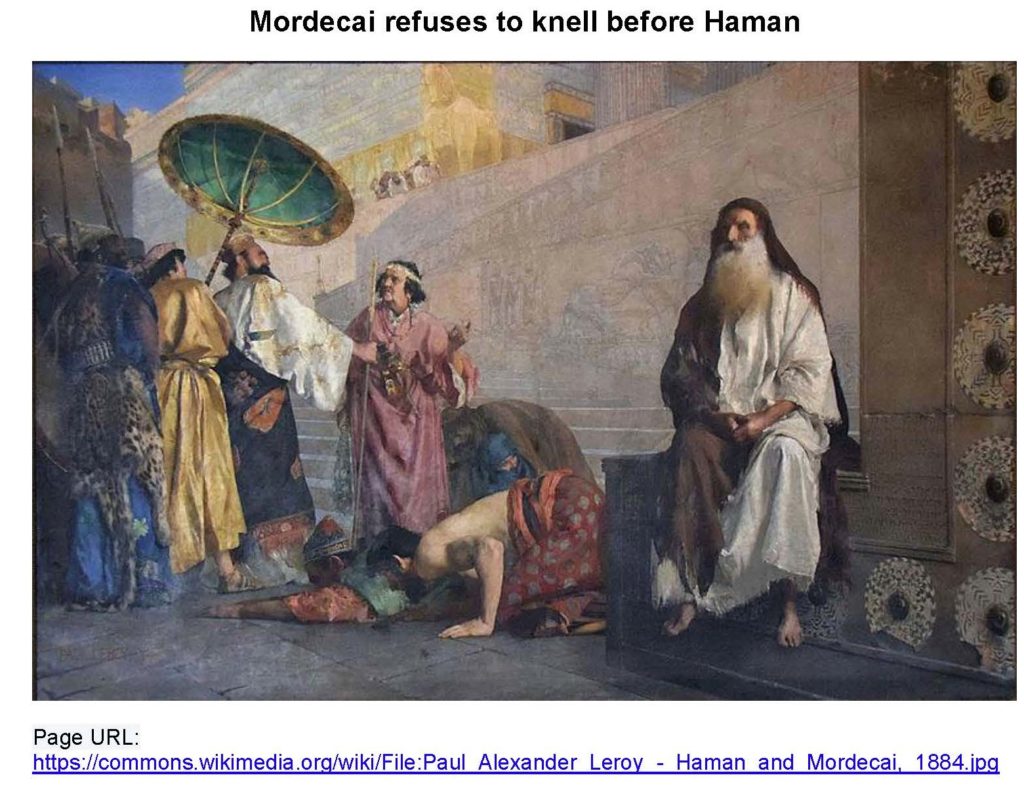 Esther 3:3-4 Then the royal officials at the king’s gate asked Mordecai, “Why do you disobey the king’s command?”  (4)  Day after day they spoke to him but he refused to comply. Therefore they told Haman about it to see whether Mordecai’s behavior would be tolerated, for he had told them he was a Jew.

Mordecai no longer hide who he was, a Jew.

Esther 3:5-6 When Haman saw that Mordecai would not kneel down or pay him honor, he was enraged.  (6)  Yet having learned who Mordecai’s people were, he scorned the idea of killing only Mordecai. Instead Haman looked for a way to destroy all Mordecai’s people, the Jews, throughout the whole kingdom of Xerxes.

Satan has so much hate against God and His saints.

The Apostle Peter tells us that devil prowls around like a roaring lion looking for someone to devour, us God’s Saints.  Is this why the left have so much hatred against Christians.  *1 Peter 5:8

The entire Bible can be laid out as a drama in which Satan’s work is repeatedly stopped by God so God’s plan will progress in history.

God is always working behind the scenes on behalf of His people.

“Nisan” was a Babylonian name for the Hebrew month “Abib,” which was superseded upon the return from the captivity.  “Adar” was also a Babylonian label adopted.

Esther 3:8 Then Haman said to King Xerxes, “There is a certain people scattered and dispersed among the peoples in all the provinces of your kingdom who keep themselves separate. Their customs are different from those of all other people, and they do not obey the king’s laws; it is not in the king’s best interest to tolerate them.

Esther 3:9 If it pleases the king, let a decree be written that they be destroyed, and I will pay ten thousand talents of silver into the hands of those who do the work, to bring it into the king’s treasuries.”

The King used all of his funds on the Greek wars and found a way to put funds into his treasury. Greed.

Persian army, these are the troops were garrisons placed in each of the nations that made up the provinces were put on alert for military action on the given day.

The annual income of the entire Persian Empire was 15,000 talents of silver.[Herodotus Bk III, § 95] Silver was more rare and valued above gold.

Esther 3:10 So the king took his signet ring from his hand and gave it to Haman, the son of Hammedatha the Agagite, the enemy of the Jews.

By giving his signet ring to Haman, Xerxes was allowing “the enemy of the Jews,” as Haman was now called, to send out a proclamation to the empire in the king’s name.

The signet ring, when impressed on clay, made a special imprint, which, like a signature, represented the king’s authority.

Esther 3:11  And the king said to Haman, “The money and the people are given to you, to do with them as seems good to you.”  {washing his hands}

Esther 3:12 Then on the thirteenth day of the first month the royal secretaries were summoned. They wrote out in the script of each province and in the language of each people all Haman’s orders to the king’s lieutenants, the governors of the various provinces and the nobles of the various peoples. These were written in the name of King Xerxes himself and sealed with his own ring.

Esther 3:13  And the letters were sent by couriers into all the king’s provinces, to destroy, to kill, and to annihilate all the Jews, both young and old, little children and women, in one day, on the thirteenth day of the twelfth month, which is the month of Adar, and to plunder their possessions.

Esther 3:14 A copy of the text of the document was to be issued as law in every province and made known to the people of every nationality so they would be ready for that day.

The decree was dispatched in March 474 B.C. They had almost a year to get ready…on both sides…

Esther 3:15  The couriers went out, hastened by the king’s command; and the decree was proclaimed in Shushan the citadel. So the king and Haman sat down to drink, but the city of Shushan was bewildered (thrown into confusion).

Haman’s bloodthirstiness, along with Xerxes’ seeming indifference to such evil, appeared incredible even to a society which was used to cruel behavior, utter unconcern for human life.

Esther Agrees to Help the Jews, “For Such a Time as This”

Esther 4:1  When Mordecai learned all that had happened, he tore his clothes and put on sackcloth and ashes, and went out into the midst of the city. He cried out with a loud and bitter cry.  {not allowed in the palace}

Esther 4:2  But he went only as far as the king’s gate, because no one clothed in sackcloth was allowed to enter it.  {common knowledge?}

Esther 4:3 And in every province where the king’s command and decree arrived, there was great mourning among the Jews, with fasting, weeping, and wailing; and many lay in sackcloth and ashes.

Esther 4:4  So Esther’s maids and eunuchs came and told her, and the queen was deeply distressed. Then she sent garments to clothe Mordecai and take his sackcloth away from him, but he would not accept them.

Esther 4:5 Then Esther summoned Hathach, one of the king’s eunuchs assigned to attend her, and ordered him to find out what was troubling Mordecai and why.

Communication with the women in the harem is very difficult to be obtained, and only through the medium of the keepers.

Esther 4:6-7 So Hathach went out to Mordecai in the open square of the city in front of the king’s gate.  (7)  Mordecai told him everything that had happened to him, including the exact amount of money Haman had promised to pay into the royal treasury for the destruction of the Jews.

Money was apparently a key motive.

Esther 4:8 He also gave him a copy of the written decree for their destruction, which was published at Shushan, that he might show it to Esther and explain it to her, and that he might command her to go in to the king to make supplication to him and plead before him for her people.

Esther 4:9-10  Hathach went back and reported to Esther what Mordecai had said.  (10)  Then she instructed him to say to Mordecai,

Esther 4:11 “All the king’s officials and the people of the royal provinces know that for any man or woman who approaches the king in the inner court without being summoned the king has but one law: that they be put to death unless the king extends the gold scepter to them and spares their lives. But thirty days have passed since I was called to go to the king.”

Esther 4:12-13 When Esther’s words were reported to Mordecai,  (13)  he sent back this answer: “Do not think that because you are in the king’s house you alone of all the Jews will escape.

Esther 4:14 For if you remain completely silent at this time, relief and deliverance will arise for the Jews from another place, but you and your father’s house will perish. Yet who knows whether you have come to the kingdom for such a time as this?”

Esther 4:15-16 Then Esther sent this reply to Mordecai:  (16)  “Go, gather together all the Jews who are in Susa, and fast for me. Do not eat or drink for three days, night or day. I and my attendants will fast as you do. When this is done, I will go to the king, even though it is against the law. And if I perish, I perish.”  {Famous Line used in history}

“if I perish, I perish”: Fasting also implies prayer. Esther looks to God, not man, for her deliverance.

Esther 4:17 So Mordecai went his way and did according to all that Esther commanded him.

His inﬂuence would have led to a general fasting and prayer among the Jewish community.