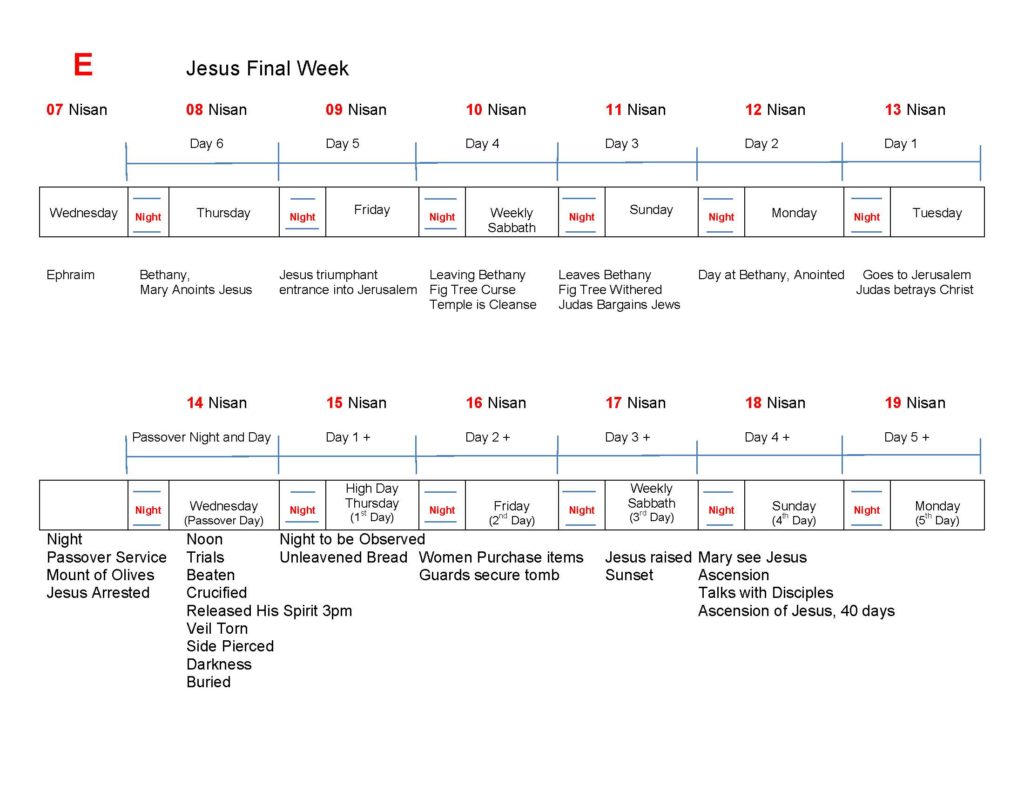 Mark 11:15-16 On reaching Jerusalem, Jesus entered the temple courts and began driving out those who were buying and selling there. He overturned the tables of the money changers and the benches of those selling doves, (16) and would not allow anyone to carry merchandise through the temple courts.

Mark 11:17 And as he taught them, he said, “Is it not written: ‘My house will be called a house of prayer for all nations‘? But you have made it ‘a den of robbers.'”  {Temple for all nations?}

Mark 11:18 The chief priests and the teachers of the law heard this and began looking for a way to kill him, for they feared him, because the whole crowd was amazed at his teaching.

Luke added every day Jesus was teaching at the temple and the leaders among the people were trying to kill him, but they could not find any way to do it, because all the people hung on his words. *Luke 19:47-48

The scribes and chief priests obviously took a dim view of these proceedings and plotted to take Him. Judas would ultimately provide them an assist, but Jesus controlled the timing!

Mark 11:19 When evening came, Jesus and his disciples went out of the city.

Luke said Jesus spend the night on the hill called the Mount of Olives, and all the people came early in the morning to hear him at the temple.  *Luke 21:37-38

The Lesson from the Withered Fig Tree

Mark 11:20 In the morning, as they went along, they saw the fig tree withered {dried up} from the roots.

Mark 11:21 Peter remembered and said to Jesus, “Rabbi, look! The fig tree you cursed has withered!” {away}

Mark 11:23 “Truly I tell you, if anyone says to this mountain, ‘Go, throw yourself into the sea,’ and does not doubt in their heart but believes that what they say will happen, it will be done for them.

Mark 11:24 Therefore I tell you, whatever you ask for in prayer, believe that you have received it, and it will be yours.

We are to keep on believing that God has already given us our request.

True faith in God is based on His Word and His Word reveals His will to us.

Romans 10:17 So then faith comes by hearing, and hearing by the word of God.

The purpose of prayer is not to get man’s will done in heaven but to get God’s will done on earth. Prayer is God’s way of enlisting us in what He is doing!

Mark 11:25 And when you stand praying, if you hold anything against anyone, forgive them, so that your Father in heaven may forgive you your sins.”

Mark 11:26 But if you do not forgive, your Father in heaven will not forgive your sins.”

Ephesians 3:14-15 For this reason I bow my knees to the Father of our Lord Jesus Christ, (15) from whom the whole family in heaven and earth is named,

The Authority of Jesus Challenged

Mark 11:27 They arrived again in Jerusalem, and while Jesus was walking in the temple courts, the chief priests, the teachers of the law and the elders came to him.

Mark 11:28 “By what authority are you doing these things?” they asked. “And who gave you authority to do this?”

Mark 11:29 Jesus replied, “I will ask you one question. Answer me, and I will tell you by what authority I am doing these things.

Mark 11:31 They discussed {reasoned} it among themselves and said, “If we say, ‘From heaven,‘ he will ask, ‘Then why didn’t you believe him?’

Mark 11:32 But if we say, ‘Of human origin‘ …” (They feared the people, for everyone held that John really was a prophet.)

Mark 11:33 So they answered Jesus, “We don’t know.” Jesus said, “Neither will I tell you by what authority I am doing these things.”

The very Temple in which Jesus was standing featured a richly carved grapevine 70 cubits high (>100 ft) sculpted around the door which led from the porch to the Holy Place. The branches, tendrils and leaves, were of gold; the bunches hanging upon them were costly jewels. (Herod had ﬁrst placed it here, and rich and patriotic Jews had continued to add to its embellishment.) The Maccabbean coins also bore the same symbols.

Jesus is talking to the chief priests, outlining the sins and fate of the stubborn Jewish nation.  Jesus was using phrases that the Jews understood directly from Isaiah.

Last week of the life of Jesus before the cross.

Mark 12:1  Jesus then began to speak to them in parables: “A man planted a vineyard. He put a wall around it, dug a pit for the winepress and built a watchtower. Then he rented the vineyard to some farmers and moved to another place.

Jesus is referring to Israel is the vineyard and some Rabbis in their minds interpreter Isa 5:1-30 as a prediction of the Temple’s destruction in 586 B.C.

Isaiah 5:1-2 I will sing for the one I love a song about his vineyard: My loved one had a vineyard on a fertile hillside.  (2)  He dug it up and cleared it of stones and planted it with the choicest vines.

He built a watchtower in it and cut out a winepress as well. Then he looked for a crop of good grapes, but it yielded only bad fruit.

Mark 12:2  At harvest time he sent a servant to the tenants to collect from them some of the fruit of the vineyard.

Mark 12:3 But they seized him, beat him and sent him away empty-handed.

Mark 12:4  Then he sent another servant to them; they struck this man on the head and treated him shamefully.

Mark 12:5 He sent still another, and that one they killed. He sent many others; some of them they beat, others they killed.

2 Kings 17:13 The LORD warned Israel and Judah through all his prophets and seers: “Turn from your evil ways. Observe my commands and decrees, in accordance with the entire Law that I commanded your ancestors to obey and that I delivered to you through my servants the prophets.”

Paul tells us In the past God spoke to our ancestors through the prophets at many times and in various ways, Hebrews 1:1

Mark 12:7 “But the tenants said to one another, ‘This is the heir. Come, let’s kill him, and the inheritance will be ours.’

“…his well-beloved”: These words are an obvious description of Christ himself.  The plot to kill him was a description of the scheming at that very time to put Jesus to death.

Mark 12:8 So they took him and killed him, and threw him out of the vineyard.

Jewish Leadership plotted against Jesus and finally killed Him. Thus Jesus our Lord predicted His own death and exposed His guilty murderers.

If the tenants could do away with the heir, they would have a clear claim to the property; so they cast him out and killed him

Paul said:  And so Jesus also suffered outside the city gate to make the people holy through his own blood.  (13)  Let us, then, go to him outside the camp, bearing the disgrace he bore.  *Hebrews 13:12-13

Mark 12:9  “What then will the owner of the vineyard do? He will come and kill those tenants and give the vineyard to others.

In answering they condemned themselves

Matthew 21:41 They told him, “He will put those horrible men to a horrible death. Then he will lease the vineyard to other farmers who will give him his produce at harvest time.”

The prediction that the owner would destroy the horrible men was fulﬁlled in A.D. 70, when the Romans under Titus destroyed Jerusalem and put an end to any semblance of self-rule which the Jew had previously enjoyed.

Mark 12:10-11  Haven’t you read this passage of Scripture: “‘The stone the builders rejected has become the cornerstone; (11) the Lord has done this, and it is marvelous in our eyes‘?”

This is a quote that Jesus used from Psalm

The stone the builders rejected has become the cornerstone; (23) the LORD has done this, and it is marvelous in our eyes. *Psalms 118:22-23

Mark 12:12 Then the chief priests, the teachers of the law and the elders looked for a way to arrest him because they knew he had spoken the parable against them. But they were afraid of the crowd; so they left him and went away.

The rulers themselves are restrained, through fear of the people.