This section opens with a warning against the pride of the rich.

Mark 12:41  Jesus sat down opposite the place where the offerings were put and watched the crowd putting their money into the temple treasury. Many rich people threw in large amounts.

There were 13 trumpet-shaped chests around the Court of Women where people deposited their offerings.

Mark 12:42 But a poor widow came and put in two very small copper coins, worth only a few cents.

·      Was she one where the Jewish Leadership took her property?

A poor widow with no husband or children, or son said Corban (Mark 7:11-12

Mark 12:43  Calling his disciples to him, Jesus said, “Truly I tell you, this poor widow has put more into the treasury than all the others.

A way of speaking Jesus often used, when he was about to deliver something of importance and which required attention right now.

Mark 12:44 They all gave out of their wealth; but she, out of her poverty, put in everything—all she had to live on.”

She gave everything she had.

More than one-third of Mark’s Gospel Book takes place during a seven-day period—the Passover week when Jesus is finally put to death.

Occasion of the Prophecy about the Destruction of the Temple

Mark 13:1  As Jesus was leaving the temple, one of his disciples said to him, “Look, Teacher! What massive stones! What magnificent buildings!”

Matthew  added: his disciples came up to him to call his attention to its buildings.  **Matthew 24:1

·      The disciples were very impressed, saying we never saw anything like this in Galilee.  What about us when we go to the big city construction.

·      Josephus, said of the Temple, the stones were white and strong, some of the stones were 55 feet long {most were thirty-seven feet} and says the pillars supporting the porches were twenty-five cubits high and some 12 feet high and 16 feet in thickness, all of one stone, and that of the whitest marble

Jesus continued His last week of ministry in Jerusalem by teaching His apostles about future events.

Mark 13:2 “Do you see all these great buildings?” replied Jesus. “Not one stone here will be left on another; everyone will be thrown down.”

·      The destruction of the Temple, city and the whole nation is foretold.

·      Jesus pointed out and takes up the thought of His disciple and prophecies the complete destruction of the Temple.

Signs of the End of the Age

Mark 13:3  As Jesus was sitting on the Mount of Olives opposite the temple, Peter, James, John and Andrew asked him privately,

Notice, this was a private meeting and conversation, without the other disciples and individuals.  (Matthew 24:3)

On Mount of Olives: Jesus would have a full view of the Temple from the mount, west of Jerusalem.

Luke is a complete different discussion with a different audience.

Mark 13:4 “Tell us, when will these things happen? And what will be the sign that they are all about to be fulfilled?”

4 Disciples were there for this conﬁdential brieﬁng.

Mark 13:5  Jesus said to them: “Watch out that no one deceives you.

Jesus’ brieﬁng was for some very practical and personal reasons:

·      “Watch out or Take heed” against deception is the primary emphasis.

False prophets, teachers, messiahs, Christians pretending to come from God, cults, person designed by God to represents Him, teaching against the commands of Jesus, etc,

Taking upon them the name of Jesus, disciples of Satan.

2 Peter 2:1 But there were also false prophets among the people, just as there will be false teachers among you. They will secretly introduce destructive heresies, even denying the sovereign Lord who bought them, bringing swift destruction on themselves.

Mark 13:7 When you hear of wars and rumors of wars, do not be alarmed. Such things must happen, but the end is still to come.

·      The early church is hearing about Roman wars all the time, but it is not a sign of the end times.

·      Interesting, reading in only 268 years there has been no war recorded

Jesus just said to go on preaching the Gospel, without being alarmed about current events.

Mark 13:8 For nation will rise against nation, and kingdom against kingdom. And there will be earthquakes in various places, and there will be famines and troubles. These are the beginnings of sorrows.

·      Notice this is just the very beginning of what will happen

·      Jesus uses the phrase of partaking of birth pains.

·      Like a woman’s contractions, these events will hasten the birth of Jesus Kingdom. 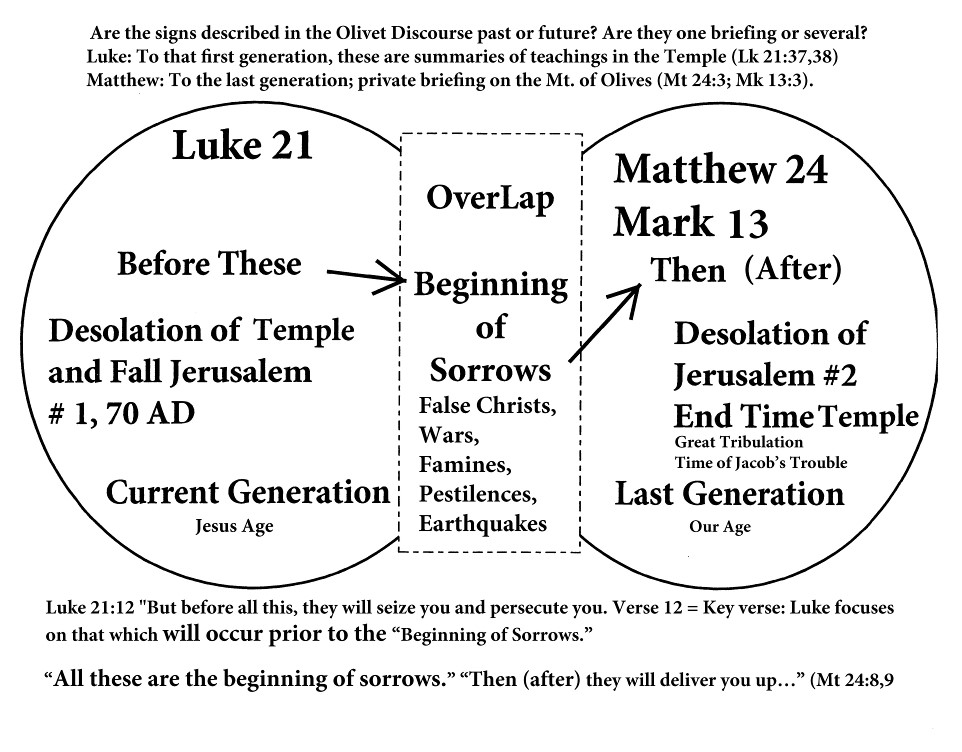 This suggests that they will come suddenly, build up gradually, increasing in intensity.

Mark 13:9  “You must be on your guard. You will be handed over to the local councils and flogged in the synagogues. On account of me you will stand before governors and kings as witnesses to them.

·      Be ready for persecution, not to escape it, stand before civil judges?

·      Synagogues or churches, places of worship?

Jesus words have a practical application and warning to each of us.

Mark 13:10  And the gospel must first be preached {or published} to all nations.

God sends a warning before He gives judgment.

Mark 13:11 Whenever you are arrested and brought to trial, do not worry beforehand about what to say. Just say whatever is given you at the time, for it is not you speaking, but the Holy Spirit.

·      Hardly an excuse to be poorly prepared, however!  We will be arrested.

·      The Holy Spirit will help us, but do not depend upon any other help.

·      For all the nearest ties with family will be broken.  Being Put to death.

Mark 13:12  “Brother will betray brother to death, and a father his child. Children will rebel against their parents and have them put to death.

·      Family members will serve as informers against believers.

Mark 13:13  Everyone will hate you because of me, but the one who stands firm to the end will be saved.

The Abomination of Desolation

Mark 13:14 NIV “When you see ‘the abomination that causes desolation’ standing where it does not belong, let the reader understand, then let those who are in Judea flee to the mountains.

Need to be careful with the NIV.  It drops wording and meaning.

Mark 13:14 NKJV “So when you see the ‘ABOMINATION OF DESOLATION,‘ {spoken of by Daniel the prophet}, standing where it ought not” (let the reader understand), “then let those who are in Judea flee to the mountains.

This is at the end time.  It will happen again in the future.  It has not happen yet during our life time.

Daniel 9:25-27 “Know and understand this: From the time the word goes out to restore and rebuild Jerusalem {Remember Ezra was to rebuild the Temple, and Nehemiah {Esther} was to rebuild the walls of Jerusalem} until the Anointed One  {Jesus}, the ruler, comes, there will be seven ‘sevens,’ and sixty-two ‘sevens.’ It will be rebuilt with streets and a trench, but in times of trouble {enemies were fighting them}.

(26)  After the sixty-two ‘sevens,’ the Anointed One will be put to death and will have nothing. The people of the ruler who will come will destroy the city and the sanctuary. {70 AD by the Romans} The end will come like a flood: War will continue until the end, and desolations have been decreed.

(27)  He will confirm a covenant with many for one ‘seven.’ In the middle of the ‘seven’ he will put an end to sacrifice and offering. And at the temple he will set up an abomination that causes desolation, until the end that is decreed is poured out on him.”  {Temple at the end time, this is why many say there is a Temple with sacrifice and offering}

Deuteronomy 29:17 and you saw their abominations and their idols which were among them–wood and stone and silver and gold);

“The Abomination of Desolation” is the ultimate insult: placing an idol on the holiest spot on the planet: in Jerusalem, in the Temple, in fact, in the Holy of Holies!

What happen to cause this Abomination of Desolation.

This is an historical even that happen two centuries earlier (167 B.C.)

Antiochus determined to make the land of Israel a buffer state between himself and Egypt.

·      The Jews were forbidden to follow the Mosaic Law

·      By observing the Sabbath, their annual feasts, and traditional sacrifices

·      He forbid the Jews circumcision of children

·      The Jews were ordered to offer unclean sacrifices

·      Ordered the Jews to eat swine’s flesh or be penalized by death.

·      This is what the Maccabean revolt is all about,

This is the Jewish Hanukkah celebration

Jesus said it will happen again and described it as yet in the future.

2 Thessalonians 2:3-4 Don’t let anyone deceive you in any way, for that day will not come until the rebellion occurs and the man of lawlessness is revealed, the man doomed to destruction.  (4)  He will oppose and will exalt himself over everything that is called God or is worshiped, so that he sets himself up in God’s temple, proclaiming himself to be God.

So far, It is interesting that this never happened (again) in history, so far

One time, In 40 A.D. the Emperor Caligula ordered his image to be erected in the Holy of Holies, but died before it could be carried out.

Luke 21:20-21 “When you see Jerusalem being surrounded by armies, you will know that its desolation is near.  (21)  Then let those who are in Judea flee to the mountains, let those in the city get out, and let those in the country not enter the city.

Historian, Eusebius, tells us that the Christians in Jerusalem fled to Pella safe from the Romans army.