The Jews Destroy Their Enemies 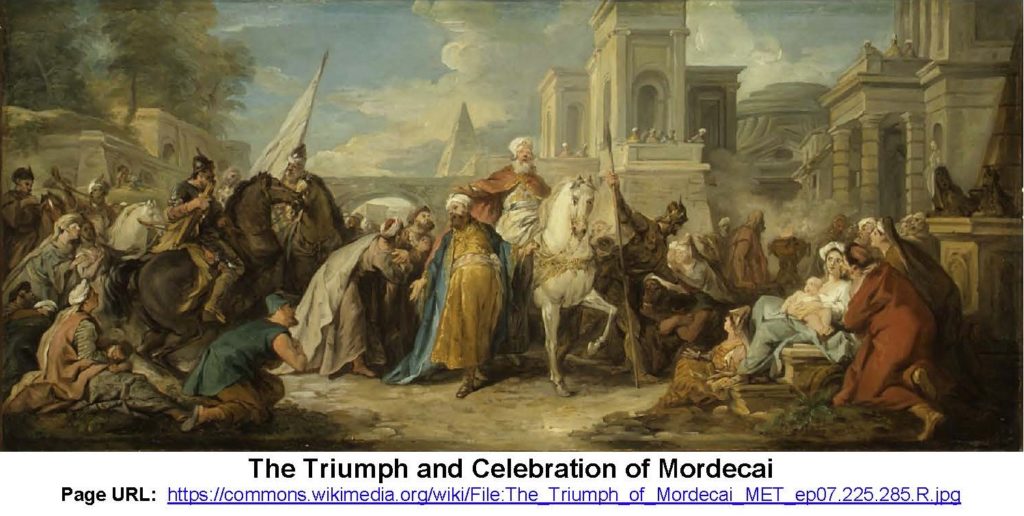 The Feast of Purim;  The Jews Destroy Their Enemies

Esther 9:1 On the thirteenth day of the twelfth month, the month of Adar, the time came for the king’s command and his decree to be carried out. On this day the enemies of the Jews had hoped to overpower them, but now the tables were turned and the Jews got the upper hand over those who hated them.

Remember, those who hated the Jews, formed themselves into groups against the Jews to kill them, so the Jews knew who these groups were.

Esther 9:3  And all the nobles of the provinces, the satraps {or lieutenants}, the governors and the king’s administrators helped the Jews, because fear of Mordecai had seized them {fell upon them}.  {interesting}

Esther 9:4 Mordecai was prominent in the palace; his reputation spread throughout the provinces, and he became more and more powerful.

Paul tells us to reflex that God is for us, who can be against us and there is nothing that separate us from the love of God.  * Romans 8:31-39

Esther 9:5 The Jews struck down all their enemies with the sword, killing and destroying them, and they did what they pleased to those who hated them.     {face to face, hand to hand}

We see the Jews take the sword to begin the slaughter and the destruction of their enemies who hated them at their discretion.

Esther 9:6-10 In the citadel of Susa, the Jews killed and destroyed five hundred men.  (7)  They also killed Parshandatha, Dalphon, Aspatha,  (8)  Poratha, Adalia, Aridatha,  (9)  Parmashta, Arisai, Aridai and Vaizatha,  (10)  the ten sons of Haman son of Hammedatha, the enemy of the Jews. But they did not lay their hands on the plunder.

Interesting side:  The Jews, when on the feast of Purim they read this book of Esther, require of themselves to read the names of Haman’s ten sons all in one breathe, without any pause, because they say that they were all killed together, and all gave up the ghost just in the same moment.

Notice, only men were killed, not the wives and children and took no plunder.  Other Jewish writing mention this about the family members.

Esther 9:11 The number of those killed in the citadel of Susa was reported to the king that same day.

Esther 9:12 The king said to Queen Esther, “The Jews have killed and destroyed five hundred men and the ten sons of Haman in the citadel of Susa. What have they done in the rest of the king’s provinces? Now what is your petition? It will be given you. What is your request? It will also be granted.”

Esther 9:13 “If it pleases the king,” Esther answered, “give the Jews in Susa permission to carry out this day’s edict tomorrow also, and let Haman’s ten sons be impaled on poles.”

Esther 9:14  So the king commanded that this be done. An edict was issued in Susa, and they impaled the ten sons of Haman.

Esther 9:15  The Jews in Susa came together on the fourteenth day of the month of Adar, and they put to death in Susa three hundred men, but they did not lay their hands on the plunder.

Esther 9:16  Meanwhile, the remainder of the Jews who were in the king’s provinces also assembled to protect themselves and get relief from their enemies. They killed seventy-five thousands of them but did not lay their hands on the plunder.

Esther 9:17 This happened on the thirteenth day of the month of Adar, and on the fourteenth they rested and made it a day of feasting and joy.

The Feast of Purim established

Esther 9:18-19  The Jews in Susa, however, had assembled on the thirteenth and fourteenth, and then on the fifteenth they rested and made it a day of feasting and joy.  (19)  That is why rural Jews—those living in villages—observe the fourteenth of the month of Adar as a day of joy and feasting, a day for giving presents to each other.

That feasting was made the day of Puram and celebrated even today.

The Feast of Purim Established

Esther 9:20-21 Mordecai recorded these events, and he sent letters to all the Jews throughout the provinces of King Xerxes, near and far,  (21)  to have them celebrate annually the fourteenth and fifteenth days of the month of Adar

1st Letter sent out to all the Jews, charging them to keep the feast of Purim

It is from this verse that it has been broadly concluded that Mordecai may well have been the author of this book.

Esther 9:22  as the time when the Jews got relief from their enemies, and as the month when their sorrow was turned into joy and their mourning into a day of celebration. He wrote them to observe the days as days of feasting and joy and giving presents of food to one another and gifts to the poor.

God set before the Jews the use of this feast which was for the relief from their enemies, the remembrance of God’s deliverance, the maintenance of mutual friendship and relief of the poor.

Esther 9:23-24  So the Jews agreed to continue the celebration they had begun, doing what Mordecai had written to them.  (24)  For Haman son of Hammedatha, the Agagite, the enemy of all the Jews, had plotted against the Jews to destroy them and had cast the pur (that is, the lot) for their ruin and destruction.

The pur became a symbol of God’s using circumstances to deliver His own.

Esther 9:25 But when the plot came to the king’s attention, he issued written orders that the evil scheme Haman had devised against the Jews should come back onto his own head, and that he and his sons should be impaled on poles.

Esther 9:26-27 (Therefore these days were called Purim, from the word pur.) Because of everything written in this letter and because of what they had seen and what had happened to them,  (27)  the Jews took it on themselves to establish the custom that they and their descendants and all who join them should without fail observe these two days every year, in the way prescribed and at the time appointed.

Esther 9:28  These days should be remembered and observed in every generation by every family, and in every province and in every city. And these days of Purim should never fail to be celebrated by the Jews—nor should the memory of these days die out among their descendants.

Esther 9:29 So Queen Esther, daughter of Abihail, along with Mordecai the Jew, wrote with full authority to confirm this second letter concerning Purim.

Esther 9:30-31 And Mordecai sent letters to all the Jews in the 127 provinces of Xerxes’ kingdom—words of goodwill and assurance {peace and truth} (31) to establish these days of Purim at their designated times, as Mordecai the Jew and Queen Esther had decreed for them, and as they had established for themselves and their descendants in regard to their times of fasting and lamentation.

Encourage them to live in peace with one another and their neighbors and in the true religion, in the most loving and sincere manner.

Esther 9:32 Esther’s decree confirmed these regulations about Purim, and it was written down in the records.

The Greatness of Mordecai

Esther 10:1 King Xerxes imposed tribute throughout the empire, to its distant shores.

Tribute may refer both to taxation and forced labor that the king imposed on all his territory.

Esther 10:2  And all his acts of power and might, together with a full account of the greatness of Mordecai, whom the king had promoted, are they not written in the book of the annals of the kings of Media and Persia?

Esther 10:3  Mordecai the Jew was second in rank to King Xerxes, preeminent among the Jews, and held in high esteem by his many fellow Jews, because he worked for the good of his people and spoke up for the welfare of all the Jews.

Mordecai began promoting the Jewish interest as much as he could with his power. 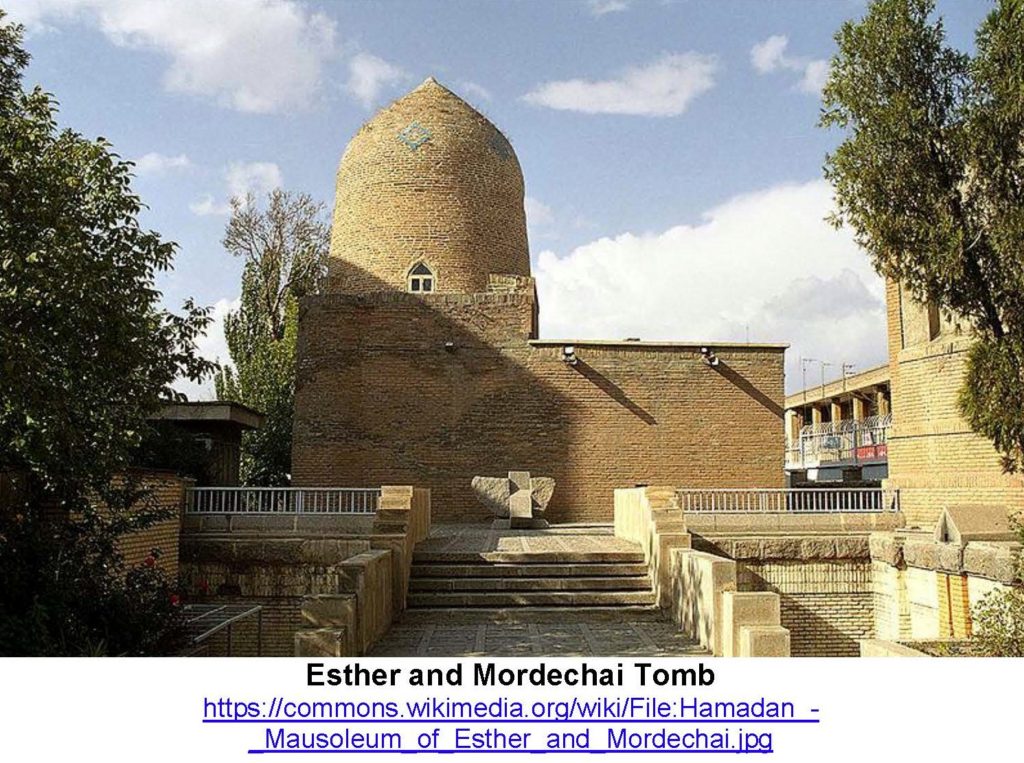