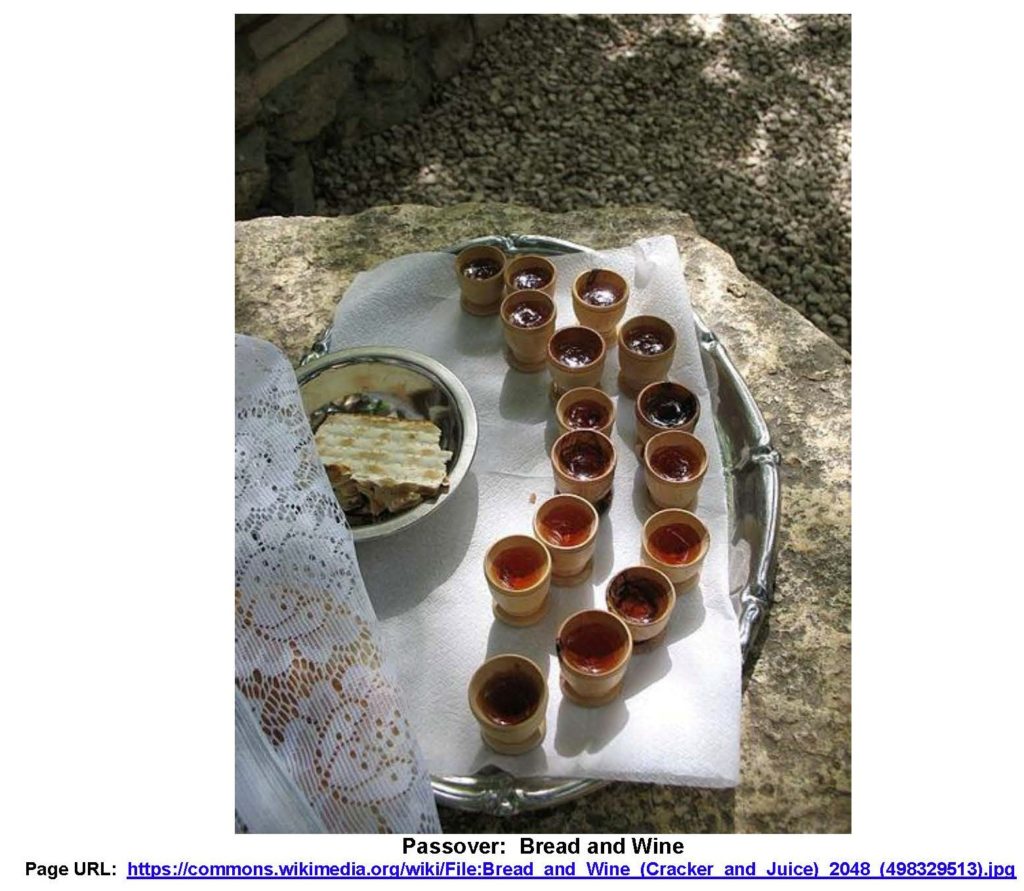 We are close to the Passover Services in a few days as we are looking into our personal lives at this time in order to be better prepared for the Passover.

We know there are certain preparations we are to do for the various Feast Holy Days throughout the year and the Passover has the most important preparation of all for each of us.  Interesting, Passover is not even a Holy Day.  It is a feast day.

In the 23rd chapter of Leviticus, we find a summary of God’s annual festivals.  The first three festivals, beginning with the Passover are primarily memorials of the first part of God’s plan.

Leviticus 23:4-5 These are the LORD’s appointed feasts, sacred assemblies that you are to declare at their appointed time. (5) “The LORD’s Passover is to begin on the fourteenth day of the first month at twilight.

1 Corinthians 5:7 Get rid of the old yeast so that you may be a new batch of dough, since you are to be free from yeast. For the Messiah, our Passover, has been sacrificed.   {sin}

1 Peter 1:18-19 For you know that it was not with perishable things like silver or gold that you have been ransomed from the worthless way of life handed down to you by your ancestors, (19) but with the precious blood of the Messiah, like that of a lamb without blemish or defect.

After Jesus’ death, the Passover, celebrated with the new symbols of unleavened bread and wine, became a yearly memorial of His sacrifice for our sins, for Jesus became the reality that the Passover lamb had foreshadowed.

1 Peter 2:24 “He himself bore our sins” in his body on the tree, so that we might die to those sins and live righteously. “By his wounds you have been healed.”

The Passover for us is a memorial of Christ’s sacrifice for our sins, which He wants Christians to especially remember every year.

1 Corinthians 11:26-32 For as often as you eat this bread and drink from this cup, you proclaim the Lord’s death until he comes. (27) Therefore, whoever eats the bread or drinks from the cup in an unworthy manner will be held responsible for the Lord’s body and blood.

(28) A person must examine himself and then eat the bread and drink from the cup, (29) because whoever eats and drinks without recognizing the body, eats and drinks judgment on himself. (30) That’s why so many of you are weak and sick and a considerable number are dying.

(31) But if we judged ourselves correctly, we would not be judged. (32) Now, while we are being judged by the Lord, we are being disciplined so we won’t be condemned along with the world.

This is a time, during the Passover season, to remember what Jesus has done for each of us by His sacrifice, with a deep sense of appreciation and understanding.

Matthew 26:28 because this is my blood of the new covenant that is being poured out for many people for the forgiveness of sins.

Luke 22:20 He did the same with the cup after supper, saying, “This cup is the new covenant sealed by my blood, which is being poured out for you.

The Old Covenant was sealed by Moses when he took the blood of the sacrifice and sprinkled in on the people.

Exodus 24:8 Moses took the blood, sprinkled it on the people, and said, “This is the blood of the covenant which the LORD made with you based on all these words.”

1 Timothy 4:1-2 Now the Spirit says clearly that in the last times some people will abandon the faith by following deceitful spirits, the teachings of demons, (2) and the hypocrisy of liars, whose consciences have been burned by a hot iron.

Hebrews 10:25-27 not neglecting to meet together, as is the habit of some, but encouraging one another even more as you see the day of the Lord coming nearer. (26) For if we choose to go on sinning after we have learned the full truth, there no longer remains a sacrifice for sins, (27) but only a terrifying prospect of judgment and a raging fire that will consume the enemies of God.   {person will not repent or feel guilty}

We know, we all sins and if we feel guilty and repent, we will be forgiven.

What we are talking about, their conscience is now seared, they will not repent and sinning means nothing to them.

Hebrews 10:28-30 Anyone who violates the Law of Moses dies without mercy “on the testimony of two or three witnesses.” (29) How much more severe a punishment do you think that person deserves who tramples on God’s Son, treats as common the blood of the covenant by which it was sanctified, and insults the Spirit of grace?

(30) For we know the one who said, “Vengeance belongs to me; I will pay them back,” and again, “The Lord will judge his people.”

John 17:3 And this is eternal life: to know you, the only true God, and the one whom you sent: Jesus the Messiah.

1 John 3:2 Dear friends, we are now God’s children, but what we will be like has not been revealed yet. We know that when the Messiah is revealed, we will be like him, because we will see him as he is.

1 Corinthians 13:12 In the same way, we can see and understand only a little about God now, as if we were peering at his reflection in a poor mirror; but someday we are going to see him in his completeness, face-to-face. Now all that I know is hazy and blurred, but then I will see everything clearly, just as clearly as God sees into my heart right now.

I believe faith is very important to Passover because all this is anchored to our faith in God and the depth of our relationship with Him.

There is a direct connection between knowing God and submitting to Him, because to know Him is to love Him, and we submit to those we love.

Galatians 4:8-9 However, in the past, when you did not know God, you were slaves to things that are not really gods at all. (9) But now that you know God, or rather have been known by God, how can you turn back again to those powerless and bankrupt basic principles? Why do you want to become their slaves all over again?

This is something that we do not want to discount in any way, shape, or form.

Galatians 3:27-29 Indeed, all of you who were baptized into the Messiah have clothed yourselves with the Messiah. (28) Because all of you are one in the Messiah Jesus, a person is no longer a Jew or a Greek, a slave or a free person, a male or a female. (29) And if you belong to the Messiah, then you are Abraham’s descendants indeed, and heirs according to the promise.

We must remember this:

Hebrews 2:1-4 For this reason we must pay closer attention to the things we have heard, or we may drift away, (2) because if the message spoken by angels was reliable, and every violation and act of disobedience received its just punishment, (3) how will we escape if we neglect a salvation as great as this? It was first proclaimed by the Lord himself, and then it was confirmed to us by those who heard him, (4) while God added his testimony through signs, wonders, various miracles, and gifts of the Holy Spirit distributed according to his will.

We were called to do the work of the Lord and will be rewarded with promised that we will be heirs of the world, because the earth is our inheritance for a 1000 years after we are changed to Spirit Being.

Hebrews 2:5-10 For he did not put the coming world we are talking about under the control of angels. (6) Instead, someone has declared somewhere, “What is man that you should remember him, or the son of man that you should care for him? (7) You made him a little lower than the angels, yet you crowned him with glory and honor

(8) and put everything under his feet.” Now when God put everything under him, he left nothing outside his control. However, at the present time we do not yet see everything put under him. (9) But we do see someone who was made a little lower than the angels. He is Jesus, who is crowned with glory and honor because he suffered death, so that by the grace of God he might experience death for everyone. (10) It was fitting that God, for whom and through whom everything exists, should make the pioneer of their salvation perfect through suffering as part of his plan to glorify many children,

We are blessed beyond our wildest imaginations to be part of the Body of Jesus and called to take part of the Passover.  See you at Passover Services.