Skip to content
Bible, Who's Who, Individuals Stories in the Scriptures Doctrine New Testament Messages
By Steve October 17, 2020October 18, 2020

We have covered in detail several different individuals in the Scriptures and today we will cover another one, Cornelius, Roman Centurion, who was the Gentile, First Fruits of Believers and then Peter’s sermon about the Gospel of Jesus. 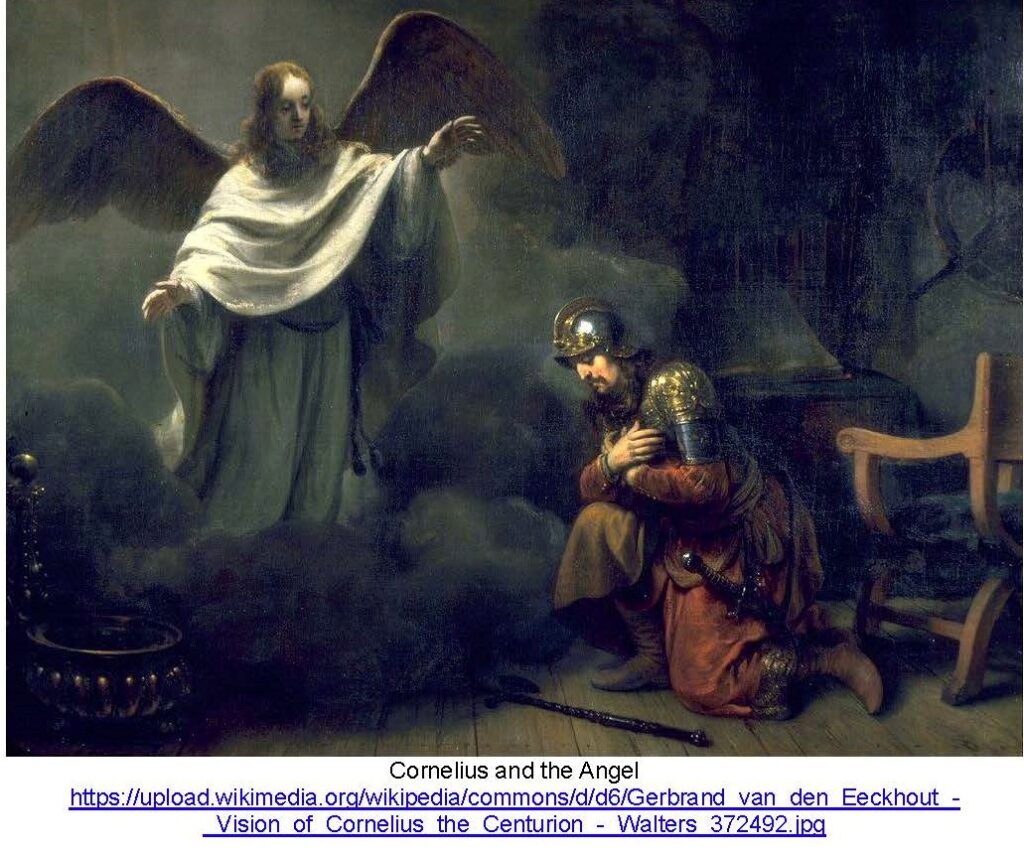 Cornelius – What do we know about him

Chief seaport of Palestine, on shores of Mediterranean Sea

Let us look at a sermon by the Apostle Peter that he gave in the home of Cornelius, a Roman Officer, under Herod Agrippa.  This sermon was about 200 words in all and less than five minutes long; but covers the Gospel of Jesus, the Messiah.  Acts 10:34-43

Apostle Paul summary of the Gospel of Jesus; or message; did he received it from Peter??

How did this happen, The Book of Acts now shifts from the Jews to the Gentiles.  This was about 8 – 10 years after Pentecost.   Jesus had Peter to become the door opener to the Gentiles into the Church.

Acts 10:1 Now in Caesarea there was a man named Cornelius, a centurion in what was known as the Italian Regiment.

This Caesarea is on the coast, the headquarters for the Roman establishment.  Regiment composed of about 6000 men, on call by the Roman procurator that he could depend upon, his bodyguard.  This chapter in Acts is the only place Cornelius is mention.

Acts 10:2 He was a devout man who feared God, as did everyone in his home. He gave many gifts to the poor among the people and always prayed to God.

A Gentile who feared God, supported the poor and always in prayer to the One Lord God.

Acts 10:3 One day about three in the afternoon he had a vision and clearly saw an angel of God coming to him and saying to him, “Cornelius!”

An Angel came to Cornelius, a Gentile, where they had a conversation

Acts 10:4 He stared at the angel in terror and asked, “What is it, Lord?” The angel answered him, “Your prayers and your gifts to the poor have arisen as a reminder to God.

Interesting, a Gentile prayer are all accepted before God if they fear God and do physical things for the poor. The angel came in the daylight and not in a trance, but a vision, totally awake.  I think we all would be in terror if an Angel came to us.

Acts 10:5 Send men now to Joppa and summon Simon, who is called Peter.

Joppa is about 30 miles away, south of Caesarea. Right then, Cornelius did what the Angel told him to do.

Acts 10:6 He is a guest of Simon, a leatherworker, whose house is by the sea.”

Jesus had to cut away Peter’s prejudices by having him stay for many days not only with a Gentile, but with one whose trade Peter likely considered repulsive.  A Roman soldier.

Acts 10:7 When the angel who had spoken to him had gone, Cornelius summoned two of his household servants and a devout soldier, one of those who served him regularly.

The fact that Cornelius readily obeyed the angel is a sign of how much he desired and was open to the truth.

Acts 10:8 He explained everything to them and sent them to Joppa.

Acts 10:9 Around noon the next day, while they were on their way and coming close to the town, Peter went up on the roof to pray.

Acts 10:10 He became very hungry and wanted to eat, and while the food was being prepared, he fell into a trance

Acts 10:11 and saw heaven open and something like a large linen sheet coming down, being lowered by its four corners to the ground.

Acts 10:12 In it were all kinds of four-footed animals, reptiles, and birds of the air.

Jesus just told him to eat,

Acts 10:14 But Peter said, “Absolutely not, Lord, for I have never eaten anything that is common or unclean!”

Clean and unclean foods, but we will find out later that Jesus was not talking about food, but not to call any man or woman common or unclean.

Acts 10:15 Again the voice came to him a second time, “You must stop calling unclean what God has made clean.“

Acts 10:16 This happened three times. Then the sheet was quickly taken back into heaven.

Why 3 times, could it be that Jesus want Peter to remember that Peter denied Jesus 3 times and what it entails.

Acts 10:17 While Peter was still at a loss to know what the vision he had seen could mean, the men sent by Cornelius asked for Simon’s house and went to the gate.

Vs. 28 answer this question,  Peter had to overcome His prejudice against Gentiles and carry the message of Jesus to the Gentiles.

Acts 10:18 They called out and asked if Simon who was called Peter was staying there.

Acts 10:19 Peter was still thinking about the vision when the Spirit told him, “Look! Three men are looking for you.

Not only did he have a vision, but the Spirit was talking to him.

Why are the hated Gentiles looking for me, who are unclean before God.

Acts 10:22 The men replied, “Cornelius, a centurion and an upright and God-fearing man who is respected by the whole Jewish nation, was instructed by a holy angel to send for you to come to his home to hear what you have to say.”

These Gentiles told Peter, a Roman Soldier was told directly by an Angel of God to have you come to His home.  Peter had no choice, but to go.

Acts 10:23 So Peter welcomed them as his guests. The next day he got up and went with them, and some of the brothers from Joppa went along with him.

So Peter, welcome these Gentiles into his home, then prepared to leave the next day.

Ten men journeyed: two household servants and a soldier; the apostle Peter; and six Christian Jews (Acts 11:12). Ten is the number of witness:

Acts 10:24 The next day they arrived in Caesarea. Cornelius was expecting them and had called his relatives and close friends together.

On their journey, one day and part of another day.  Cornelius with his family and friends, did not doubt that Peter will be at his home the next day

Acts 10:25 When Peter was about to enter, Cornelius met him, bowed down at his feet, and began to worship him.

How much did a Gentile, Cornelius, wanted to learn.

Peter just told him, you do not worship me, only Jesus you worship.

Acts 10:27 As Peter talked with him, he went in and found that many people had gathered.

Quite a group was forming: Peter’s ten and Cornelius’ family and friends.  Remember, a Jew is not even supposed to enter the house of a Gentile; this was probably the first time that Peter had ever been in a Gentile house, not sure.  Being around this many Gentiles.

Acts 10:28 He told them, “You understand how wrong it is for a Jew to associate or visit with a gentile. But God has shown me that I should stop calling anyone common or unclean,

Peter eyes and mind was open, the prejudice was gone.  This shows Peter finally understood the vision, do not call a Gentile unclean.

It was not about food, people who are future Saints.

Notice, Peter realize this about Gentiles, but he did not understand why he sent for Peter.

Acts 10:30 Cornelius replied, “Four days ago at this very hour, three o’clock in the afternoon, I was praying in my home. All at once a man in radiant clothes stood in front of me

Angel was in radiant, bright, and or shining clothes or robe,

Acts 10:31 and said, ‘Cornelius, your prayer has been heard. God has remembered your gifts to the poor

Gifts to the poor and your Gentiles prayers, Jesus remembers

Acts 10:32 so send messengers to Joppa and summon Simon, who is called Peter, to come to you. He is a guest in the home of Simon, a leatherworker, by the sea.’

Acts 10:33 So I sent for you immediately, and it was good of you to come. All of us are here now in the presence of God to listen to everything the Lord has ordered you to say.”

Now this is the start of Peter Sermon

Acts 10:34 Then Peter began to speak: “Now I understand that God shows no partiality.

Interesting, now and only now, shows that Jesus shows not partiality for individuals, Jews or Gentiles

Acts 10:35 Indeed, whoever fears him and does what is right is acceptable to him {Jesus} in any nation.

If anyone from any nation, fears God and does what is acceptable to Jesus.

Acts 10:36 He has sent his word to the descendants of Israel and brought them the good news of peace through Jesus the Messiah. This man {Jesus} is the Lord of everyone.

First, Jesus went to Israel and then to the rest of the world.

Acts 10:37 You know what happened throughout Judea, beginning in Galilee after the baptism that John preached.

Acts 10:38 God anointed Jesus of Nazareth with the Holy Spirit and with power, and because God was with him, he went around doing good and healing everyone who was oppressed by the devil.

John 3:34-35 The one whom God sent speaks the words of God, because God does not give the Spirit in limited measure to him. (35) The Father loves the Son and has put everything in his hands.

Acts 10:39 We are witnesses of everything Jesus did in the land of the Jews, including Jerusalem. “They hung him on a tree and killed him,

The Apostles were witnesses of Jesus death on the cross

Acts 10:40 but God raised him on the third day and allowed him to appear

The Apostles were witnesses of Jesus resurrection to life

Acts 10:41 not to all the people, but to us who were chosen by God to be witnesses and who ate and drank with him after he rose from the dead.

Acts 10:42 He also ordered us to preach to the people and to testify solemnly that this is the one appointed by God to be the judge of the living and the dead.

Acts 10:43 All the prophets testify to this: everyone who believes in Jesus receives forgiveness of sins through his name.”

Notice that Peter is talking to a Gentile group, Jesus had him to open the door to the Gospel of Jesus to them.

This the end of Peter Sermon, a miracle then just happens

Acts 10:44 While Peter was still making this statement, the Holy Spirit fell on all the people who were listening to his message.

Acts 10:45 Then the circumcised believers who had come with Peter were amazed that the gift of the Holy Spirit had been poured out on the gentiles, too.

The Gentiles were included to receive the Holy Spirit, it open the minds of the believers the Power that Jesus has.

Acts 10:46 For they heard them speaking in tongues and praising God. Then Peter said,

Acts 10:47 “No one can stop us from using water to baptize these people who have received the Holy Spirit in the same way that we did, can they?”

Acts 10:47 “No one can stop us from using water to baptize these people who have received the Holy Spirit in the same way that we did, can they?”

Peter said they are to be baptized in water.

Acts 10:48 So Peter ordered them to be baptized in the name of Jesus the Messiah. Then they asked him to stay there for several days.

The Gentiles were baptized in the name of Jesus, they had received the Holy Spirit. 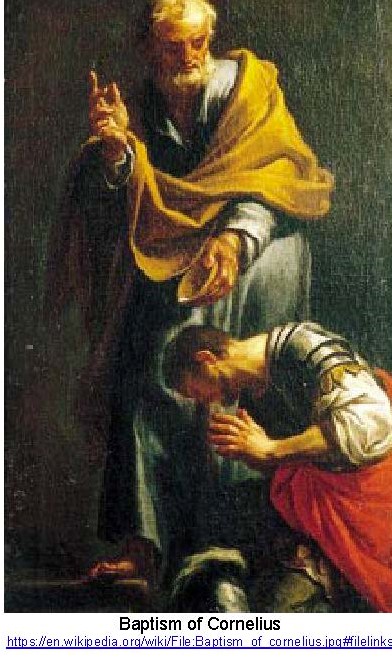