John 6:51 I am the Living Bread that came down from heaven. If anyone eats this bread, he will live forever. And the bread I will give for the life of the world is my flesh.” 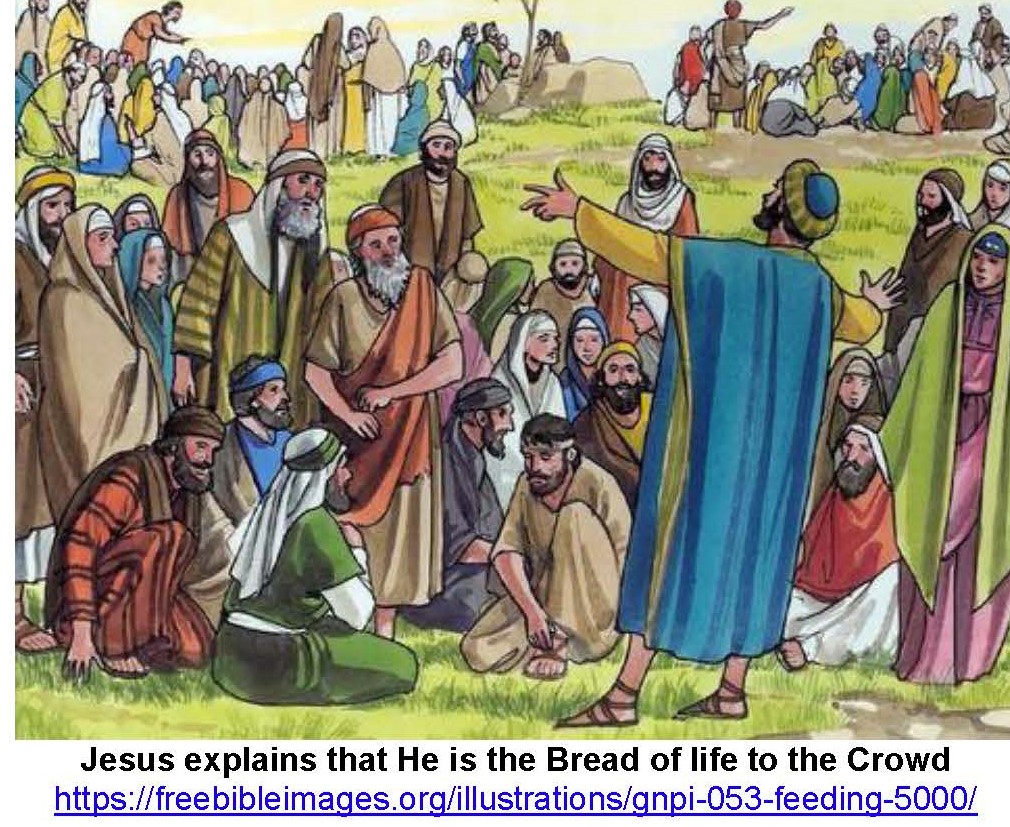 John 6:51 I am the Living Bread that came down from heaven. If anyone eats this bread, he will live forever. And the bread I will give for the life of the world is my flesh.“

This is why we are required to take of the Passover.

John 6:52 Then the Jews debated angrily with each other, asking, “How can this man give us his flesh to eat?”

John 6:54 Whoever eats my flesh and drinks my blood has eternal life, and I will raise him to life on the last day,

John 6:58 This is the bread that came down from heaven, not the kind that your ancestors ate. They died, but the one who eats this bread will live forever.”

There are 3 different responses to Jesus statement to the end of the chapter.

Their primary response was one of unbelief.

“You do not wish to go away also, do you?” Peter answered, “To whom shall we go? Thou hast the words of eternal life.”

The betrayer, who was identified one year before the act.

The Words of Eternal Life, Jesus spoke to the Disciples

Their primary response was one of unbelief.

John 6:60 When many of his disciples heard this, they said, “This is a difficult statement. Who can accept it?”

John 6:61 But Jesus, knowing within himself that his disciples were grumbling about this, asked them, “Does this offend you?

Jesus was saying. If ye are stumbled at what I have said, how will ye bear what I now say?”

John 6:62 What if you saw the Son of Man going up to the place where he was before?

John 6:63 It is the Spirit who gives life; the flesh accomplishes nothing. The words that I have spoken to you are spirit and life.

John 6:64 But there are some among you who do not believe…” because Jesus knew from the beginning those who weren’t believing, as well as the one who would betray him.  {Judas betray Him}

1 Corinthians 1:23 but we preach the Messiah crucified. He is a stumbling block to Jews and nonsense to gentiles,

John 6:65 So he said, “That’s why I told you that no one can come to me unless it be granted him by the Father.”  {The father needs to call them}

John 6:66 As a result, many of his disciples turned back and no longer associated with him.  {Because of Jesus teaching, they stopped traveling}

Jesus spoke to the Twelve Disciples who became His Apostles

“You do not wish to go away also, do you?” Peter answered, “To whom shall we go? Thou hast the words of eternal life.”

John 6:68 Simon Peter answered him, “Lord, to whom would we go? You have the words of eternal life.

John 6:69 Besides, we have believed and remain convinced that you are the Holy One of God.”

The betrayer, who was identified one year before the act.

John 6:70-71 Jesus answered them, “I chose you, the Twelve, didn’t I? Yet one of you is a devil.” (71) Now he was speaking about Judas, the son of Simon Iscariot, because this man was going to betray him, even though he was one of the Twelve.

Interesting side:  Jesus knew about a year before that Judas was going to betray him.

Jesus goes to Jerusalem for the Feast of Tabernacles

John 7:1 After this, Jesus traveled about in Galilee, because he didn’t want to travel in Judea, since the Jews there were trying to kill him.

John 7:2 Now the Jews’ Feast of Tabernacles was at hand.

Remember, John was writing to the church, which the majority of the members was Converted Gentiles, so John called it the Jews, Feast.

John 7:3 So his brothers told him, “You should leave this place and go to Judea, so that your disciples can see the actions that you’re doing,

The brothers of Jesus never seemed to be supportive of His ministry before His death and resurrection, but that changed after His resurrection

John 7:4 since no one acts in secret if he wants to be known publicly. If you’re going to do these things, you should reveal yourself to the world!”

Jesus brothers just told Him: You can’t be famous when you hide like this! If you’re so great, prove it to the world!

His brothers ask Jesus to go with them to the feast.

Jesus appears to say “No.”

Then He goes in secret and teaches in the Temple.

Jesus brothers did not understand that Jesus had to attend to observed the law (Deut 16:16 – all males shall attend 3 times a year).

John 7:6 Jesus told them, “My time has not yet come, but your time is always here.

His brothers can go to the feast anytime they want to, their lives were not in any danger.

John 7:7 The world cannot hate you, but it hates me because I testify against it that its actions are evil.

John 7:8 Go up to the festival yourselves. I am not yet going to this festival, because my time has not yet fully come.”

Notice the little word “yet” in “My time is not yet come.” Jesus did not say that He would not go up to the feast at this time on His own schedule.

John 7:9 After saying this, he remained in Galilee.

John 7:10 But after his brothers had gone up to the festival, he went up himself, not openly but, as it were, in secret.

John 7:11 The Jews kept looking for him at the festival, asking, “Where is that man?”   {looking for Jesus for no good end}

That man:  was it said in Contempt?  Was this asked to Jesus brothers.

Some says Jesus is a man of a good principle, of a good life and conversation; and who is good, kind, and beneficent, both to the bodies and souls of men; preaches good doctrine, and does many good things:

While others says Jesus deceives the people; drawing them off from the law of Moses, teaching them to break the Sabbath, setting himself up as the Messiah, and asserting himself to be the son of God

John 7:13 Nevertheless, no one would speak openly about him because they were afraid of the Jewish leaders.

We should not be surprised at differing views. It has been 1½ years since healing at Bethesda on the Sabbath. “Political correctness” pre-vails even today.

John 7:14 Halfway through the festival, Jesus went up to the Temple and began teaching.

This is the first mention in the Gospel of John of Jesus teaching in the Temple.

John 7:15 The Jewish leaders were astonished and remarked, “How can this man be so educated when he has never gone to school?”

It must have been an impressive lesson.

The Jewish rulers were astonished at his learning about the Scriptures, since he had never attended the great schools of their doctors or any place of education.

What did the Jewish Leadership think about Jesus disciples

Acts 4:13 When they saw the courage of Peter and John and realized that they were unschooled, ordinary men, they were astonished and they took note that these men had been with Jesus.

John 7:16 Jesus replied to them, “My teaching is not mine but comes from the one who sent me.

John 7:17 If anyone wants to do his will, he will know whether this teaching is from God or whether I am speaking on my own.

John 7:18 He who speaks from himself seeks his own glory; but He who seeks the glory of the One who sent Him is true, and no unrighteousness is in Him.

They said Jesus is a Sabbath breaker.

John 7:19 Moses gave you the Law, didn’t he? Yet none of you is keeping the Law. Why are you trying to kill me?”

John 7:21 Jesus answered them, “I performed one action {or miracle}, and all of you are astonished.  {or marvel or amazed}

John 7:22 Moses gave you circumcision; not that it is from Moses, but from the fathers; and so you circumcise a boy on the Sabbath.

John 7:23  Now if a boy can be circumcised on the Sabbath so that the law of Moses may not be broken, why are you angry with me for healing a man’s whole body on the Sabbath?

John 7:24 Stop judging by appearances, but judge with righteous judgment!“

Do we make Superficial Judgments or make righteous judgment.