Passover: Why do we do it?

Passover is a Memorial Day, a very important anniversary day for a Christian Believer.  It is a feast day, but not a High Day.  A review today. 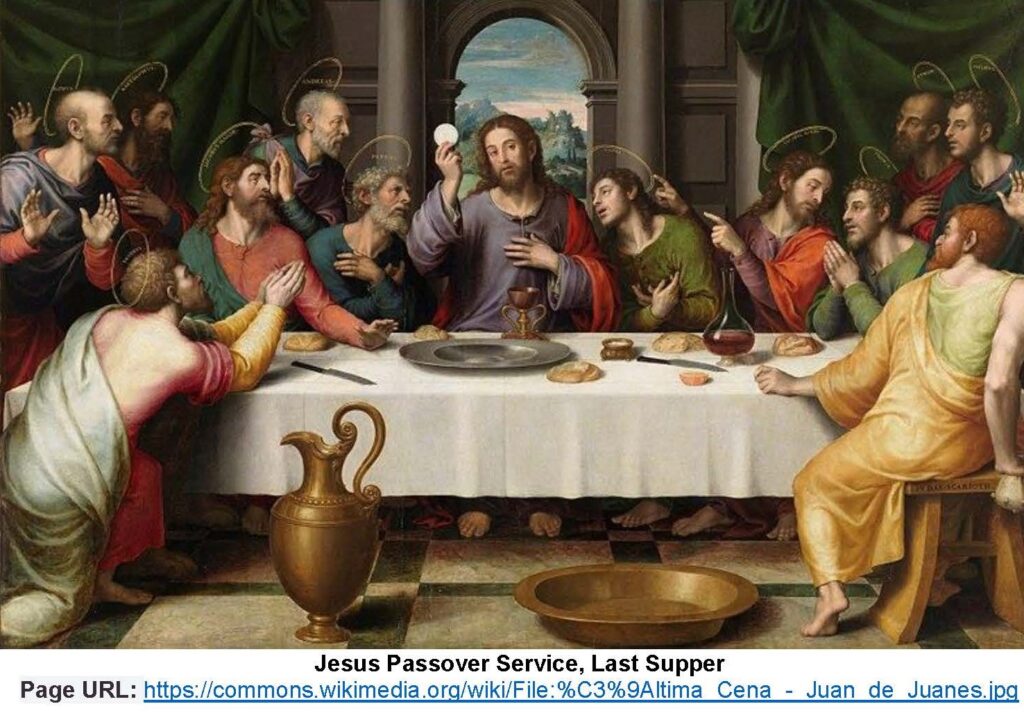 Memorial:  something designed to preserve the memory of a person, event, etc., as a monument or a holiday.

Why should we, as a Christian, observe the Passover?

Because we are told to.

Leviticus 23:4-5 These are the LORD’s appointed feasts, sacred assemblies that you are to declare at their appointed time.  (5)  “The LORD’s Passover is to begin on the fourteenth day of the first month at twilight.

Convocation just means, a Rehearsal, something called out, assembly, calling.

Apostle Paul tells us that Jesus, our Lord said why we are to observe the Passover”

1 Corinthians 11:23-26 For I received from the Lord that which I also delivered to you: that the Lord Jesus on the same night in which He was betrayed took bread; (24)  and when He had given thanks, He broke it and said, “Take, eat; this is My body which is broken for you; do this in remembrance of Me.”  (25)  In the same manner He also took the cup after supper, saying, “This cup is the new covenant in My blood. This do, as often as you drink it, in remembrance of Me.”  (26)  For as often as you eat this bread and drink this cup, you proclaim the Lord’s death till He comes.

As we approach Passover this season, we are to prepare ourselves and our homes.

How are we to do it?  I think about what the Apostle Paul tells us what the Gospel is, because it applies to this time of year.  We are to remember Jesus death, burial and resurrection, which took place during this time period.

1 Corinthians 15:1-4 Now I’m making known to you, brothers, the gospel that I proclaimed to you, which you accepted, on which you have taken your stand,  (2)  and by which you are also being saved if you hold firmly to the message I proclaimed to you, unless, of course, your faith was worthless.  (3)  For I passed on to you the most important points that I received:

Jesus is at the right hand of God’s Throne and on His Own Throne.

We are to prepare ourselves and our homes as we approach the Lord’s Passover this season.

Why do we remove leaven from our homes?

Exodus 12:15 You are to eat unleavened bread for seven days. On the first day be sure to remove all the leaven from your houses, because any person who eats anything leavened from the first day until the seventh will be cut off from Israel.

Why, so we do not accidently eat something leaven.  We find leavening symbolizes sin and we are to remove it from our lives.  Sin puffs up just as physical leaven puffs up.

1 Corinthians 5:6-8 Your boasting is not good. You know that a little yeast leavens the whole batch of dough, don’t you?  (7)  Get rid of the old yeast so that you may be a new batch of dough, since you are to be free from yeast. For the Messiah, our Passover, has been sacrificed.  (8)  So let’s keep celebrating the festival, neither with old yeast nor with yeast that is evil and wicked, but with yeast-free bread that is both sincere and true.  {Unleavened Bread}

What is Leavening? baking powder, baking soda (bicarbonate of soda), yeast, etc.  Something that makes your cooking puff up.

Exodus 13:6 You are to eat unleavened bread for seven days, and on the seventh day there is to be a festival to the LORD.

Yes, we are to eat it every day with our meals.

How are we to prepare ourselves for the Passover?

It is a shame, the word “Unworthy” has been use to put a guilt trip on individuals in the past.  The Greek word means, nonchalant, profaning and regards the celebration as a mere ritual.  If we have the attitude of we have not sinned and become before the Passover, then we could be in an unworthy manner.

But if we examine ourselves, and find we have come short, then we are the ones that needs to take of the Passover for our Lords Blood to cover our sins and we are then worthy of the Passover.  Self-examination is essential in our walk with the Lord.  It is a lifetime walk of overcoming.

In our self-examination, we look to see how far we have grown and how much we still need to overcome and to rededicate ourselves to the covenant we have made with God at our baptism and each following Passover Service.

Yes, we do rededicate ourselves openly to the world at each Passover Service.

Is it OK to observe the Passover in our homes?

It is interesting, the disciples did ask Jesus our Lord this very question.

Luke 22:7-13 Then the day of the Festival of Unleavened Bread came, on which the Passover lamb was to be sacrificed.  (8)  So Jesus sent Peter and John, saying, “Go and make preparations for us to eat the Passover meal.”  (9)  They asked him, “Where do you want us to prepare it?”  (10)  He told them, “Just after you go into the city, a man carrying a jug of water will meet you. Follow him into the house he enters (11) and say to the owner of the house, ‘The Teacher asks you, “Where is the room where I can eat the Passover meal with my disciples?”‘  (12)  Then he will show you a large upstairs room that is furnished. Get things ready for us there.”  (13) So, they went and found everything just as Jesus had told them, and they prepared the Passover meal.

This example of Jesus our Creator that it is OK to observe the Passover in our homes and not in some rented building.  Number of members makes a difference.

When should the Passover be Observed?

On what day are we to observe the Passover Services.  There is disagreement among Church of God Church groups, Jewish groups and other Sabbath groups.  On the 14th or the 15th day of the month.

We know from Scripture that our Creator God set the days to begin and end at sunset or twilight.

Numbers 9:5 They observed the Passover on the fourteenth day of the first month at twilight, in the Wilderness of Sinai. The Israelis did everything that the LORD had commanded through Moses.

How should the Lord’s Passover be Observed?

The Jews have a dinner, called, Seder meal, on the 15th day of the month at evening.  This is how the Jewish Nation observe the Passover today.

Same time period as we have the Night to be Observed

We saw that the Lord’s Passover was on the evening of the 14th, through the Scriptures.

What do we do during the Lord’s Passover?

Jesus gives us a command during the Passover Service, if we follow His command, it show we love Jesus.

Notice that this ceremony of washing His disciple’s feet had nothing whatsoever to do with the Old Testament observance of the Passover.

We look at Scriptures what Jesus did on his final night before His death and resurrection.

By washing their feet, Jesus was illustrating to His disciples that He had come to earth to serve mankind.

Foot washing depicts the attitude of humility and service to others that Jesus desires every Christian to have.

Foot Washing service.  Why do we do it:  This was Jesus command and His example for each of us to follow.

John 13:4-5 therefore he got up from the table, removed his outer robe, and took a towel and fastened it around his waist.  (5)  Then he poured some water into a basin and began to wash the disciples’ feet and to dry them with the towel that was tied around his waist.

John 13:8 Peter told him, “You must never wash my feet!” Jesus answered him, “Unless I wash you, you cannot be involved with me.”

John 13:12-17 When Jesus had washed their feet and put on his outer robe, he sat down again and told them, “Do you realize what I have done to you?  (13)  You call me Teacher and Lord, and you are right because that is what I am.  (14)  So if I, your Lord and Teacher, have washed your feet, you must also wash one another’s feet.  (15)  I have set an example for you, so that you may do as I have done to you.  (16)  Truly, I say to you with certainty, a servant is not greater than his master, and a messenger is not greater than the one who sent him.  (17)  If you understand these things, how blessed you are if you put them into practice!

Why do we take of Unleavened Bread during the Passover Service because Jesus commands it to be done.

Matthew 26:26 While they were eating, Jesus took a loaf of bread and blessed it. Then he broke it in pieces and handed it to the disciples, saying, “Take this and eat it. This is my body.”

This is why we follow this example, Blessed the Bread, brake it in pieces and pass it around, this represents Jesus Body.

Notice, the Apostle Paul added another command by Jesus:

1 Corinthians 11:23-24 For I received from the Lord what I also passed on to you: The Lord Jesus, on the night he was betrayed, took bread,  (24)  and when he had given thanks, he broke it and said, “This is my body, which is for you; do this in remembrance of me.“

Isaiah 53:5 But he was pierced for our transgressions, he was crushed for our iniquities; the punishment that brought us peace was on him, and by his wounds we are healed.

Luke adds something we may not be aware of before:

Luke 22:16 For I tell you, I will not eat it again until it finds fulfillment in the kingdom of God.”

Wine service, why this?  Also command and example.

The wine represents His shed blood of the New Covenant.

Matthew 26:27-29 Then he took a cup, gave thanks, and gave it to them, saying, “Drink from it, all of you, (28) because this is my blood of the new covenant that is being poured out for many people for the forgiveness of sins.  (29)  I tell you, I will never again drink the product of the vine until that day when I drink it with you once again in my Father’s kingdom.”

The Apostle Paul added something new, added keep doing this in memory of me.

1 Corinthians 11:25 He did the same with the cup after the supper, saying, “This cup is the new covenant in my blood. As often as you drink from it, keep doing this in memory of me.“

Why read mainly from the Book of John?

John the Apostle was beloved by Jesus, a family cousin, and know Him probably best of all and he was able write down the final, innermost, personal feeling and desires of our Lord and Creator last time with Jesus shared with the disciples.

Why sing a song at the end of the service?

An example that Jesus and the disciples did for us.

Matthew 26:30 After singing a hymn, they went out to the Mount of Olives.

Finally, Jesus did not abolish the Passover; He added a foot washing service and merely changed the symbols used.

Instead of annually shedding the blood of a lamb and eating its roasted body, we are now to use unleavened bread and wine symbols which represent His Body and His shed Blood.