Welcome to the First Day of the Feast of Unleavened Bread.

We are in the season of the Spring Holy Days which starts the beginning of God’s plan for salvation for all mankind and for each of us, personally. We just finish up the service for the Passover and, last night, the Night to be Much Observed.  Today is going to be a review, keep in our mind. 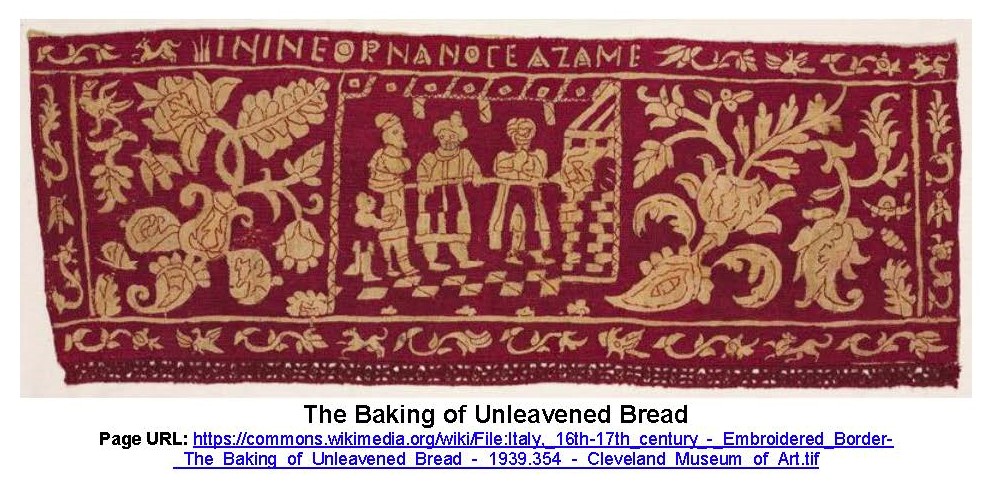 2 Timothy 4:2 Preach the word! Be ready in season and out of season. Convince, rebuke, exhort, with all longsuffering and teaching.

What do we do at this time, every year, we remove the leavening from our homes, cleaning our homes and vehicles.  We understand the meaning behind our actions, of removing physical and spiritual leaven from our lives.

Let us turn to the chapter in the Scriptures that covers the Feasts of the Lord.

Leviticus 23:1 The LORD said to Moses,

The Lord is the one we called, Jesus our Messiah, our Elder Brother.

Notice, Jesus said these are my, my appointed festivals and sacred assemblies.

The first one Jesus mention is the Weekly Sabbath and then the Passover.

Leviticus 23:3-4 “‘There are six days when you may work, but the seventh day is a day of sabbath rest, a day of sacred assembly. You are not to do any work; wherever you live, it is a sabbath to the LORD.  (4)  “‘These are the LORD’s appointed festivals, the sacred assemblies you are to proclaim at their appointed times:

Notice, Jesus tells us the sabbath rest is a day of assembly.

Leviticus 23:6 “On the fifteenth day of that month is the Feast of Unleavened Bread to the LORD. For seven days you are to eat unleavened bread.

{Notice it say 15th day of the month, not the 14th which is the Passover}

Notice, we are to hold an assembly, which is what we are doing right now.

Exodus 12:15 You are to eat unleavened bread for seven days. On the first day be sure to remove all the leaven from your houses, because any person who eats anything leavened from the first day until the seventh will be cut off from Israel.

Hard to be tempted if these items are removed from the home.

How many times does Jesus have to say this, eat unleavened bread

Evening of the 14th day

What does this mean to you.  When do we start to eat unleavened bread, from Passover through the last day.  This verse adds additional information.

Exodus 12:19-20 For seven days leaven is not to be found in your houses. Indeed, any person who eats anything leavened, is to be cut off from the congregation of Israel, whether an alien or a native of the land.  (20)  You are not to eat what is leavened. You are to eat unleavened bread in all your settlements.’“

Numbers 28:17-18 You are to hold a festival on the fifteenth day of this month for seven days, during which time unleavened bread is to be eaten.”  (18)  “On the first day, you are to hold a sacred assembly. No servile work is to be done.

Numbers 28:25 On the seventh day you are to hold another sacred assembly for your benefit, on which no servile work is to be done.”

We are to eat, unleavened bread each day during the feast.

Did Jesus and His parents observed the Passover and the Days of Unleavened Bread?

Luke 2:41 His parents went to Jerusalem every year at the Feast of the Passover.

Luke 2:42-43 And when He was twelve years old, they went up to Jerusalem according to the custom of the feast. (43) When they had finished the days {or festival was over}, as they returned, the Boy Jesus lingered behind in Jerusalem. And Joseph and His mother did not know it;

Notice Verse 43 states, “the finished the days” which meant the Passover and the seven days of Unleavened Bread was over.

Did Jesus observe the Days of Unleavened Bread as an adult?.

Mark 14:1-2 After two days it was the Passover and the Feast of Unleavened Bread. And the chief priests and the scribes sought how they might take Him by trickery and put Him to death. (2) But they said, “Not during the feast, lest there be an uproar of the people.”

Remember, the Feast of Unleavened Bread is only 7 days long, the Jewish Leadership counts Passover as a day and that makes it 8 days.  Verse 1 and 2 pertain to the planning of Christ’s enemies to arrest Him.

Mark 14:12 On the first day of the Festival of Unleavened Bread, when the Passover lamb is sacrificed, Jesus’ disciples asked him, “Where do you want us to go and make preparations for you to eat the Passover meal?”

They were well aware that He would be observing the Days of Unleavened Bread. Verse 12 show how Christ directed His disciples in arranging for the Passover meal.

Did the Apostles observe the Days of Unleavened Bread after Christ’s death and resurrection?  Doctor Luke wrote:

Acts 12:3 When he saw how this was agreeable to the Jews, he proceeded to arrest Peter, too. This happened during the Festival of Unleavened Bread.     {about 50’s A.D.}

Acts 20:6 After the Feast of Unleavened Bread, we sailed from Philippi, and days later we joined them in Troas and stayed there for seven days.   {about 55 A.D.}

Luke uses this reference as an event that was observed by the Church this many years after Jesus resurrection.  Over 20 years later.

What instruction or command did Paul give Gentiles Christians in regard to observed this festival?

1 Corinthians 5:6-8  Your boasting is not good. You know that a little yeast leavens the whole batch of dough, don’t you? (7) Get rid of the old yeast so that you may be a new batch of dough, since you are to be free from yeast. For the Messiah, our Passover, has been sacrificed.

(8) So let’s keep celebrating the festival, neither with old yeast nor with yeast that is evil and wicked, but with yeast-free bread that is both sincere and true.  {Around 55 or 56 AD}

Leaving is used as a symbol for sin.

Matthew 16:6 Jesus told them, “Watch out! Beware of the yeast of the Pharisees and Sadducees!”

There was, and is, nothing wrong with eating things containing yeast at other times, but for the purpose of the Days of Unleavened Bread it was used as a symbol of sin.  Coming out of sin.

Romans 6:23 For the wages of sin is death, but the free gift of God is eternal life in union with the Messiah Jesus our Lord.

Upon repentance and baptism, Christ’s sacrifice blots out all of one’s past sins. When Paul asked if we should continue in sin, what did he answer?

Romans 6:15-16 What, then, does this mean? Should we go on sinning because we are not under Law but under grace? Of course not!  (16)  Don’t you know that when you offer yourselves to someone as obedient slaves, you are slaves of the one you obey—either of sin, which leads to death, or of obedience, which leads to righteousness?

The Apostle Paul wrote about 25 years later to the Church members (Gentiles) in Corinth and told the Christians to observe this festival.  Feast of Unleavened Bread.

Paul was expressing that as Christ our Passover is sacrificed for us, we should proceed to keep the Feast of Unleavened Bread. Remember, Paul was the Apostle to the Gentiles.

Setting an example for all Christians today, these Jews and non-Jews observed these days in accordance with God’s laws.

Paul tells us that Jesus died, was buried and rose from the dead.  The First born.

God said Jesus was dead, brought to life as the Firstborn, the first of many in the future.

Romans 8:29 For whom He foreknew, He also predestined to be conformed to the image of His Son, that He might be the firstborn among many brethren.

Hebrews 12:23 to the general assembly and church of the firstborn who are registered in heaven, to God the Judge of all, to the spirits of just men made perfect,

Revelation 1:5-6 and from Jesus the Messiah, the witness, the faithful one, the firstborn from the dead, and the ruler over the kings of the earth. To the one who loves us and has freed us from our sins by his blood (6) and has made us a kingdom, priests for his God and Father, be glory and power forever and ever! Amen.

We went through all these verses and kind of understanding, why are we to eat Unleavened Bread during the feast.  We are to separate from the world but in the world.  There are many reasons, but have covered a number of them.

Passover night, Jesus said unleavened bread represents His Body and because it was the symbol of rejecting sin of Satan spiritual world.  It is a symbol of choosing Life because of Jesus over sin which leads to death.

Repeat:  Romans 6:23 For the wages of sin is death, but the gift of God is eternal life in Christ Jesus our Lord.

We are the church of the firstborn.

Have a good Feast of Unleavened Bread,

As we eat unleavened Bread during the Feast, take these things and think about our lives, our families, friends and mediate about what it really means to us personally.

Ask God to give us the wisdom with His Holy Spirit to grow, to change, to overcome, so we can become more Christ-like in the way we live.

Enjoy ourselves during the Feast of Unleavened Bread because of the Truths that the Holy Spirit lead us in.