What is your Red Line 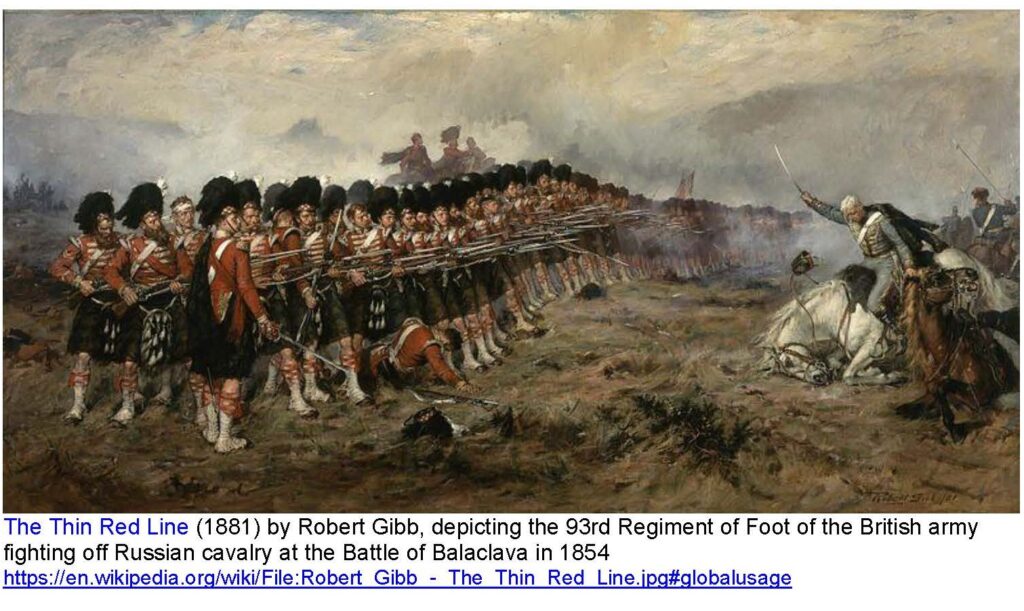 First, what does it mean to cross the Red Line?

The Red line, or “to cross the red line”, is a phrase used worldwide to mean a figurative point of no return or line in the sand, or “a limit past which safety can no longer be guaranteed.”

Remember, the Alamo, a line was drawn in the dirt and it they want to stay and fight, they had to cross the line.

The origin of the phrase in English traces back to the “Red Line Agreement” in 1928 between largest oil companies of Britain, the USA and France at the time of the end of the Ottoman Empire.

At the time of signature, the borders of the former empire were not clear and to remedy the problem an Armenian businessman named Calouste Gulbenkian, took a red pencil to draw in an arbitrary manner the borders of the divided empire.

The expression remained significant to global diplomacy and was reused during the UN’s founding after the WWII, especially in the English-speaking world. Uniquely, in France one would “cross the yellow line”

Russia wants Ukraine back, has begin with war.  10 months ago President Vladimir Putin warned rival nations not to cross Russia’s “red line” in their actions or face a tough response.  Invasion of Ukraine, people are saying, nobody knows what to do.  He threaten nuclear war if threaten.

Canada truckers are crying for freedom and block international bridge to the United States and government buildings.  Their red line was cross by the government, freedom from mask/virus.

38,000 United States truckers are going to do the same thing to Washington DC this week.

All of our presidents have used this phrase from time to time in the past.

Abortion, protesting at an abortion clinic, is this your red line.

We have red lines in our lives in so many different way.

Throughout the scriptures there are so many red lines used by God.

First, Adam and Eve was given a red line.

Genesis 2:15-17 The LORD God took the man and placed him in the Garden of Eden in order to have him work it and guard it. (16) The LORD God commanded the man: “You may freely eat from every tree of the garden, (17) but you are not to eat from the tree of the knowledge of good and evil, because you will certainly die during the day that you eat from it.”

The red line given, Faced with eviction from the only home they had ever known, Adam and Eve were escorted out of their garden paradise. Adam remembered the warning words of God.

Genesis 3:23 So the LORD God banished him from the Garden of Eden to work the ground from which he had been taken.

Notice, Adam did not guard the Garden of Eden as he was told to do.

Eve’s sons, Cain and Abel, grew to manhood. Cain, the elder, brought a sacrifice to the Lord of his home-raised produce. Abel, chose to offer

a firstborn lamb of his flock. Abel’s offering was accepted but Cain’s refused.

Genesis 4:6-7 Then the LORD said to Cain, “Why are you angry? Why is your face downcast?  (7)  If you do what is right, will you not be accepted? But if you do not do what is right, sin is crouching at your door; it desires to have you, but you must rule over it.”

Genesis 4:14 Today you are driving me from the land, and I will be hidden from your presence; I will be a restless wanderer on the earth, and whoever finds me will kill me.”

While God gave Moses the law on Mount Sinai, the people waiting below created a god they could worship.

Exodus 32:8 They have been quick to turn away from what I commanded them and have made themselves an idol cast in the shape of a calf. They have bowed down to it and sacrificed to it and have said, ‘These are your gods, Israel, who brought you up out of Egypt.’

They cross a red line the people

Exodus 32:27-28 Then he said to them, “This is what the LORD, the God of Israel, says: ‘Each man strap a sword to his side. Go back and forth through the camp from one end to the other, each killing his brother and friend and neighbor.'” (28) The Levites did as Moses commanded, and that day about three thousand of the people died.

There is so many more examples in the Scriptures where Israel cross the red line.

Example, land of Egypt and their army, etc.

But what are we, as believers or Christians are to do.

There may come a time for each one of us when we may need to be like Daniel {Dan 6:22} and his friends or like Peter and the apostles and make the choice whether we should obey God or man.

The bible clearly teaches that we must obey God if man/government asks or tells us to do something that opposes or contradicts God’s word and commandments.

Acts 5:29 But Peter and the apostles answered, “We must obey God rather than men.

Obeying God is the most importance thing to every Christian, for our lives are from God. God provides us with our daily needs of food, drink and protection and has led us unto today. We do not really understand God’s love for each of us. It is right and proper to obey God.

We are all familiar with this verse, but when we do things, do we sometimes put God to one side, and obey men and listen to their words blindly.

Remember Satan is broadcasting and influencing our society and it affect each one of us on what we do.

1 Samuel 15:22 Samuel said, “Does the LORD delight as much in burnt offerings and sacrifices as in obeying the LORD? Surely, to obey is better than sacrifice, to pay attention is better than the fat of rams.

Deuteronomy 13:4 You shall walk after the LORD your God and fear Him, and keep His commandments and obey His voice; you shall serve Him and hold fast to Him.

I do not think we have a disagreement with what we have covered.  This next part is what we might have problem with.

Paul tells us that we have an obligation to respect government and obey the law of the land as long it doesn’t conflict with God law.

Why? First of all, governments are in power by the providence of God. They derive their authority from Him.  Right or wrong, good or bad.

Romans 13:1 Every person must be subject to the governing authorities, for no authority exists except by God’s permission. The existing authorities have been established by God,

God has ordained that there should be governing authorities. Every believer is to be subject to these various authorities, even if these authorities are evil as Nero, the emperor of Rome who cruelly persecuted Christians.

When Paul wrote this letter, Nero was in power. Yet Paul exhorted the Roman believers to submit to Nero’s authority, because that authority was ordained by God Himself, although God may not approve of all acts that a government or leaders may do.

Romans 13:2 so that whoever resists the authorities opposes what God has established, and those who resist will bring judgment on themselves.

This is what truckers brought upon themselves. God may judge people through the human authorities He appoints.

Romans 13:3 For the authorities are not a terror to good conduct, but to bad. Would you like to live without being afraid of the authorities? Then do what is right, and you will receive their approval.

Government is to be obeyed because it is ordained to punish evil (Gk. kakon) and promote good (Gk. agathos).

These words Paul wrote has no hidden meanings, no secret codes.  Just straight forward what they mean.

Just between us, these words rankle us in America, depending on who is in power. Paul tells us that we have an obligation to respect the current government and obey the law of the land.

Remember governments are in power by the providence of God. They derive their authority from Him. Thus obedience to them is obedience to God. Failure to obey government shows disrespect for God’s authority.

In addition, governments are ministers of God to punish evil doers. As long as we are good, do not break the law of the land, we have nothing to fear.

The law of the land holds no terror for those who do good. We must submit to governments and laws for they can exact just wrath and punishment on us as the sword of the Lord.

Governments protect the rights, property and lives of private citizens from anarchy, violence, robbery, assault and murder, not perfectly, but they do. We must obey laws that are just and fair, but are not when they tell us to break God’s laws and commandments.

Romans 13:6 This is also why you pay taxes. For rulers are God’s servants faithfully devoting themselves to their work.

Paying taxes is the most obvious and universal expression of support for civil government.

Romans 13:7 Pay everyone whatever you owe them—taxes to whom taxes are due, tolls to whom tolls are due, fear to whom fear is due, honor to whom honor is due.

We are to fear and honor God above all others, but taxes and customs are likewise Christian obligations.

But didn’t Jesus Himself command us to do so? Didn’t He say, give to Caesar what is Caesar’s and to God what is God’s? By saying this, He upheld the authority of the government of Rome,

This is way we not to be caught up into all the various battles against the state, unless they are forcing you to do something against God’s law.

What is this all about.  What is your red line on things in your lives.

If we continue to obey the law of the land, we should be fine.  If we let emotions kick in, we can be in big trouble.

Let’s look at one example:  Canada truckers are crying for freedom and block international bridge to the United States and government buildings.  Their red line was cross by the government, freedom from mask/virus.

We probably have sympathy for what they are doing.  May I ask, what Law of God is being broken here.  None I see, but I do see there are laws of the land being broken.

Breaking the law of the land, the government has come down hard on the truckers and those helping them out.  Individuals who gave food, water, money and any type of help, are being heavy handed against them by the government.

The trucks are being taken by the government and going to be sold.

The drivers and anyone who help out the drivers are having their banks account frozen, freeze truckers’ personal and corporate bank accounts, credit cards and compel tow truck companies to haul away vehicles to be resold.  Anyone who donated to the Freedom Convoy fundraiser after February 15th could possibly have their bank account frozen.  They broke the law of the land and are going to be punished.

38,000 United States truckers are going to do the same thing to Washington DC.

So, what is your red line in your life.

Example of government against a church following God’s Law.  Feb 19, 2022, an Alabama 7th Day Adventist school was forced to forfeit a playoff basketball game.  The authorities schedule the game at 4:30 pm, on the Sabbath, the school asked if the time could be changed to 7:30 pm so the game could be played after the Sabbath.  The authorities denied the request.