Haman wanted to kill all the Jews, plan set in motion, in the Persian Empire.

This is a key lesson for each of us.  We are here, at this time of history, for a reason.

Esther’s 2nd Banquet for king and Haman, Esther pleads for her own life and the life of her people 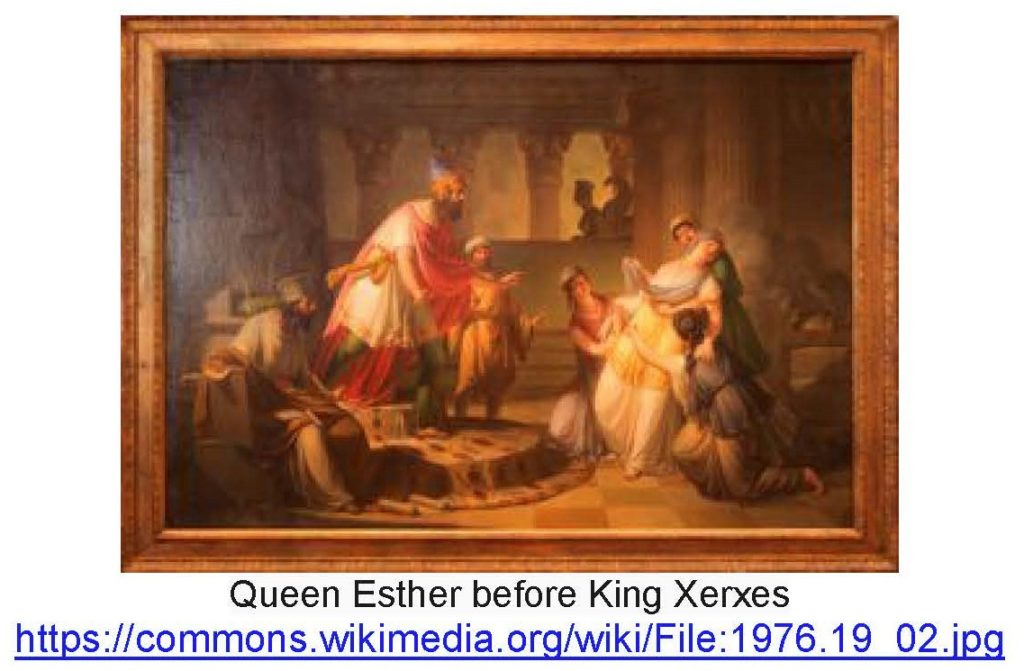 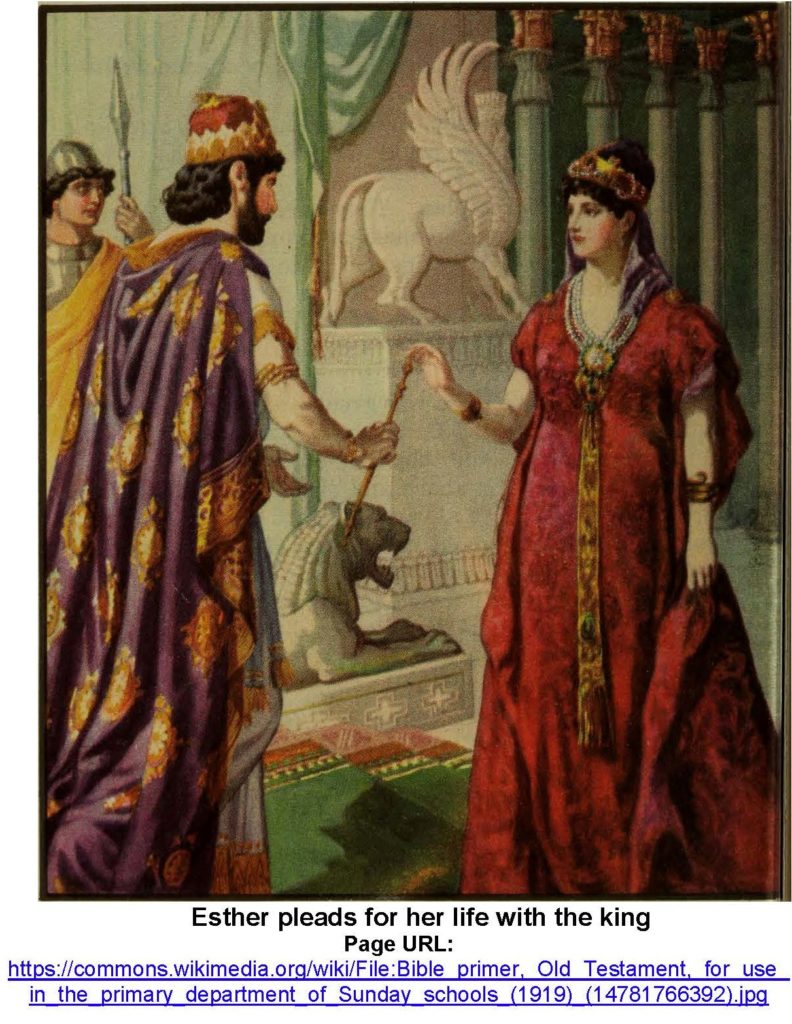 Esther 7:1 So the king and Haman went to dine with Queen Esther.

They had to go to the Queen living quarters.

Esther 7:2  and as they were drinking wine on the second day, the king again asked, “Queen Esther, what is your petition? It will be given you. What is your request? Even up to half the kingdom, it will be granted.”

This was the 3rd time the king put the question to her.  2 different things.

By now the king is really curious on what the Queen really wants.

If Haman knew of the connection between Mordecai and Esther he may have been even more terriﬁed at the prospect of attending this second banquet given by Esther.

Esther 7:3 Then Queen Esther answered, “If I have found favor with you, Your Majesty, and if it pleases you, grant me my life—this is my petition. And spare my people—this is my request.

The King figures Esther petition would be for wealth or honor, or the preferment of some of her friends to some high post, but for her life and her countrymen from death and destruction.   What does it mean?

Knowing the ideal timing, Esther got right to the point and gave her petition and request: life for her and her people, were all she had to ask.

Notice, Esther did not immediately identify herself as a Jew, targeted for massacre – even as Haman also hid the identity of the group he targeted when he made his request  {Esther 3:8}

Esther showed Godly wisdom in how she framed her request. She appealed on a personal basis, knowing that she has never done anything but please the king.

This is going to stun the king.  What is going on and what does she mean.

Notice, Esther refers to the words of Haman decree which aimed at nothing short of their destruction.

Esther 7:4 For I and my people have been sold to be destroyed, killed and annihilated. If we had merely been sold as male and female slaves, I would have kept quiet, because no such distress would justify disturbing the king.”  {or although the enemy could never compensate for the king’s loss}

This is powerful pleading: she finally unites herself with her people

Esther 7:5 King Xerxes asked Queen Esther, “Who is he? Where is he; the man who has dared presume in his heart to do such a thing?” 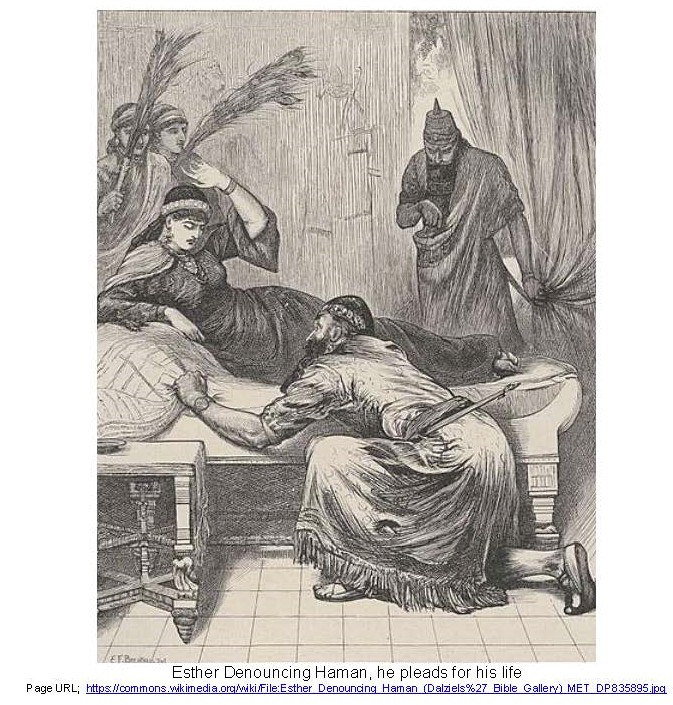 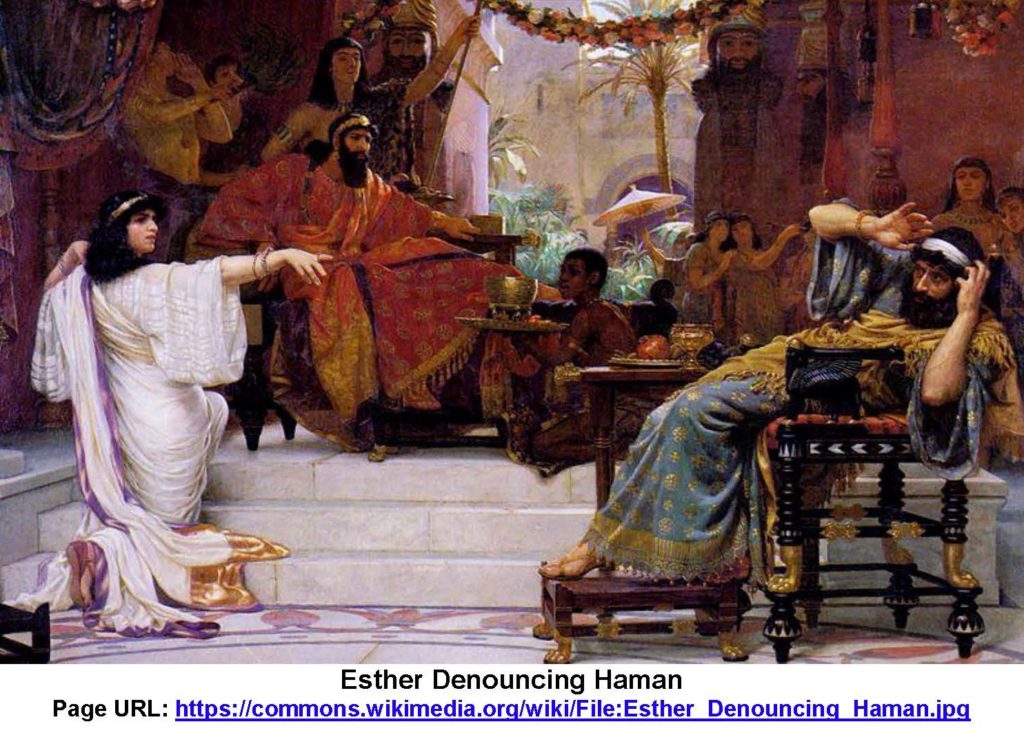 Esther 7:6  And Esther said, “The adversary and enemy is this wicked Haman!” So Haman was terrified before the king and queen.

Haman was afraid when the queen was his prosecutor, the king his judge and his own conscience a witness against him and building in his own front yard the gallows, he did this to his himself and family.

The king is so shook by this, he has to get control of himself.

Esther 7:7  The king got up in a rage, left his wine and went out into the palace garden. But Haman, realizing that the king had already decided his fate, stayed behind to beg Queen Esther for his life.

Esther 7:8  Just as the king returned from the palace garden to the banquet hall, Haman was falling on the couch where Esther was reclining. The king exclaimed, “Will he even molest the queen while she is with me in the house?” As soon as the word left the king’s mouth, they covered Haman’s face.

This was a call to attendants to seize the culprit and execute him.

Their covering a condemned man was also a practice among the Romans.

How sudden the contrasts, turn around in 1 day:

Esther 7:9 Then Harbona, one of the eunuchs attending the king, said, “A pole reaching to a height of fifty cubits stands by Haman’s house. He had it set up for Mordecai, who spoke up to help the king.” The king said, “Impale him on it!”

Esther 7:10 So they impaled Haman on the pole he had set up for Mordecai. Then the king’s fury subsided.

It was now the third month, and there were nine months to go before the fateful day when the Jews could legally be slain.

This is real drama and it really happen.  God is always in charge.

Haman was dead.  The Remaining Challenge.  Esther has been Queen for 4 years now.

The tables had now been turned, but the Jews were still left with a major problem:  The King’s command to kill them was still in effect.

It was now the 3rd month, and there were 9 months to go from throwing lots before the fateful day when the Jews could legally be slain.

There were about 15 million Jews among the estimated 100 million people in the empire.  This is the complete Persian Empire.

Just a thought, when Haman led Mordecai throughout the city proclaiming the man the King delights to honor, did this help the citizens easier to accept Mordecai in his new position.

Esther 8:1 That same day King Xerxes gave Queen Esther the estate of Haman, the enemy of the Jews. And Mordecai came into the presence of the king, for Esther had told how he was related to her.

Haman was considered a criminal and his property, goods and estate was given or forfeited to the king which then the king then gave it to Esther.

Esther 8:2 So the king took off his signet ring, which he had taken from Haman, and gave it to Mordecai; and Esther appointed Mordecai over  Haman estate.

Esther 8:3-4 Esther again pleaded with the king, falling at his feet and weeping {or tears}. She begged him to put an end to the evil plan of Haman the Agagite, which he had devised against the Jews.  (4)  Then the king extended the gold scepter to Esther and she arose and stood before him.

Esther 8:5-6  “If it pleases the king,” she said, “and if he regards me with favor and thinks it the right thing to do, and if he is pleased with me, let an order be written overruling the dispatches that Haman son of Hammedatha, the Agagite, devised and wrote to destroy the Jews in all the king’s provinces.  (6)  For how can I bear to see disaster fall on my people? How can I bear to see the destruction of my family?”

Esther 8:7-8 King Xerxes replied to Queen Esther and to Mordecai the Jew, “Because Haman attacked the Jews, I have given his estate to Esther, and they have impaled him on the pole he set up.  (8)  Now write another decree in the king’s name in behalf of the Jews as seems best to you, and seal it with the king’s signet ring—for no document written in the king’s name and sealed with his ring can be revoked.”

Esther 8:9 At once the royal secretaries {or scribes} were summoned—on the twenty-third day of the third month, the month of Sivan. They wrote out all Mordecai’s orders to the Jews, and to the satraps {or lieutenants}, governors and nobles of the 127 provinces stretching from India to Cush. These orders were written in the script of each province and the language of each people and also to the Jews in their own script and language.

Esther 8:10-11 Mordecai wrote in the name of King Xerxes, sealed the dispatches with the king’s signet ring, and sent them by mounted couriers, who rode fast horses especially bred for the king.  (11)  The king’s edict granted the Jews in every city the right to assemble and protect themselves; to destroy, kill and annihilate the armed men of any nationality or province who might attack them and their women and children, and to plunder the property of their enemies. 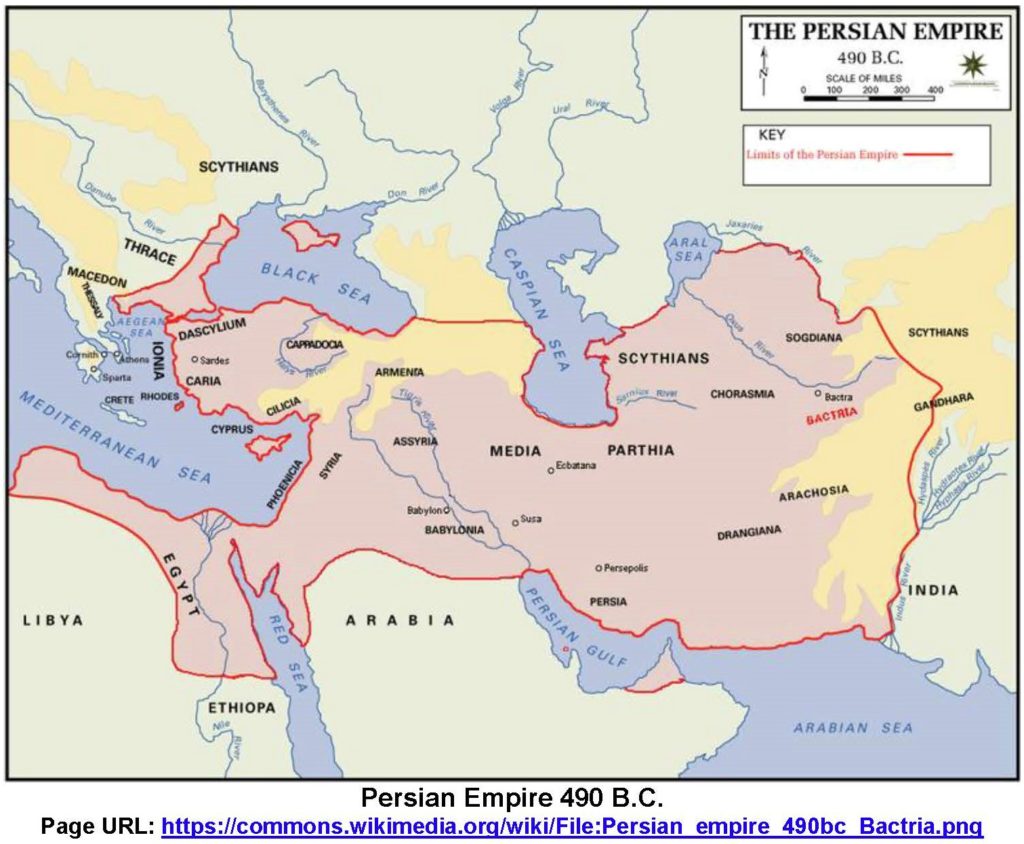 Esther 8:12 The day appointed for the Jews to do this in all the provinces of King Xerxes was the thirteenth day of the twelfth month, the month of Adar.

Esther 8:13 A copy of the document was to be issued as law in every province and made known {or published} to the people of every nationality so that the Jews would be ready on that day to avenge themselves on their enemies.

Esther 8:14-15 The couriers, riding the royal horses, went out, spurred on by the king’s command, and the edict was issued in the citadel of Susa.  (15)  When Mordecai left the king’s presence, he was wearing royal garments of blue and white, a large crown of gold and a purple robe of fine linen. And the city of Susa held a joyous celebration.

Esther 8:16-17 For the Jews it was a time of happiness and joy, gladness and honor.  (17)  In every province and in every city to which the edict of the king came, there was joy and gladness among the Jews, with feasting and celebrating. And many people of other nationalities became Jews because fear of the Jews had seized them.

Next week we will cover the last 2 chapter of Esther and see what really happens to her and the Jewish people.