Sacrifice Offerings of the Lord: Pt 1 of 3 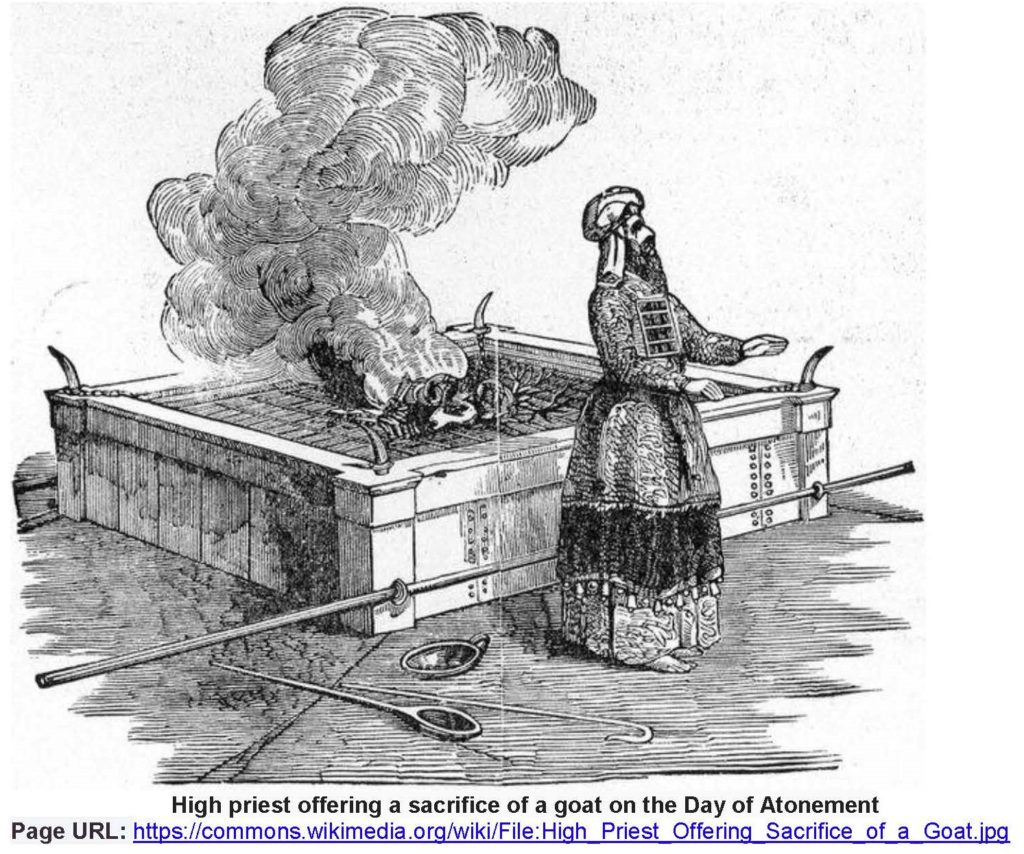 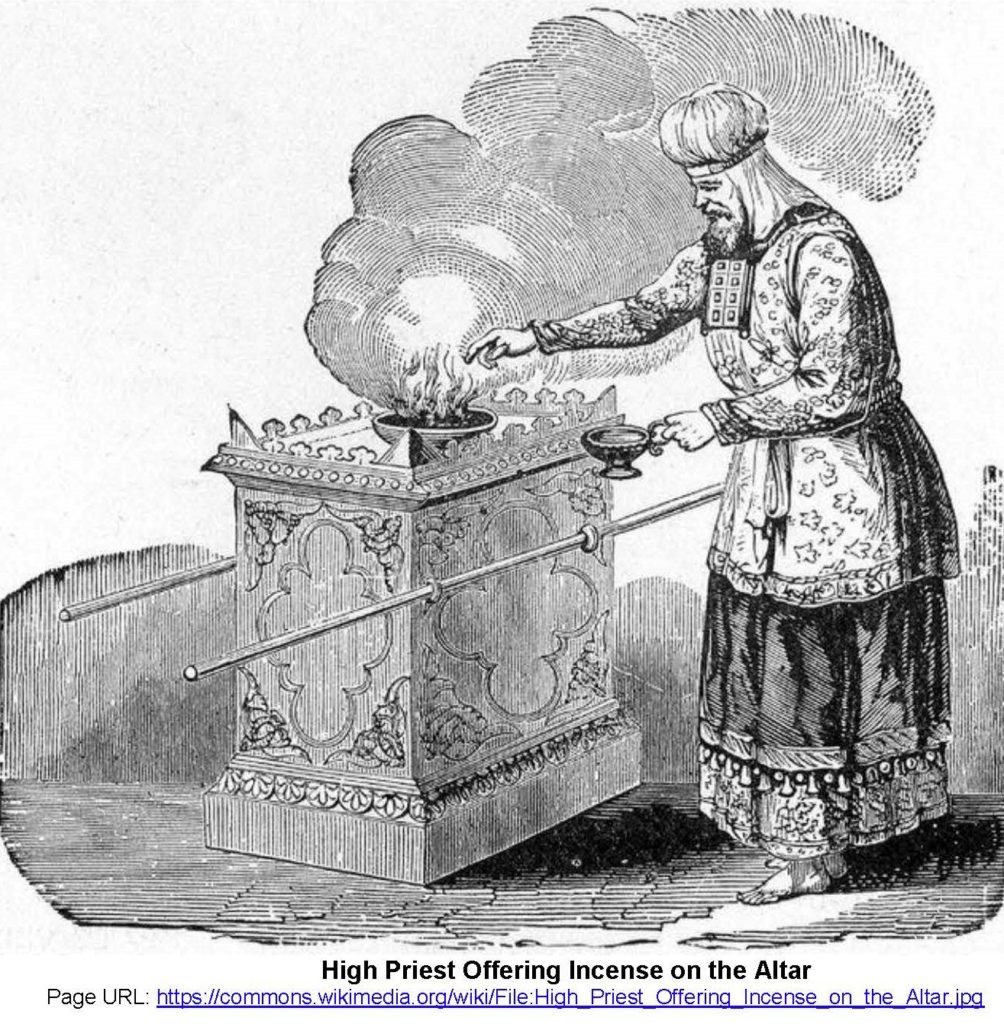 Think about the killing of animals today so we can eat meat today.  Interesting, large number of Butchers are Jewish from the tribe of Levite.

Just enough biblical language in there for people to believe about animal sacrifice and Jesus death.

This is Satan working behind the scene and if we really look at the Scriptures we will see that this story is a total misconception and false information about God’s Character and Jesus our Lord.  Fake News.

We as Christians on a whole do not really understand the sacrifices and how they are related to the Gospel, about Jesus Life, His Death and His Resurrection and Who now sits on His Throne at the right hand of the Father Throne.

Jesus confirms that sacrifices were still being enforced at that time.

Luke 5:14 Then Jesus ordered him, “Don’t tell anyone, but go, show yourself to the priest and offer the sacrifices that Moses commanded for your cleansing, as a testimony to them.”

Provision for Priests and Levites according to sacrifice.  Important,

They did not have a land inheritance in Israel.

Deuteronomy 18:1-4 “The priests, the Levites: all the tribe of Levi, shall have no part nor inheritance with Israel; they shall eat the offerings of the LORD made by fire, and His portion. (2) Therefore they shall have no inheritance among their brethren; the LORD is their inheritance, as He said to them. (3) “And this shall be the priest’s due from the people, from those who offer a sacrifice, whether it is bull or sheep: they shall give to the priest the shoulder, the cheeks, and the stomach. (4) The Firstfruits of your grain and your new wine and your oil, and the first of the fleece of your sheep, you shall give him.

The Sacrifices were required to be done in the Lord’s Home, the Temple, Altar or Tabernacle. 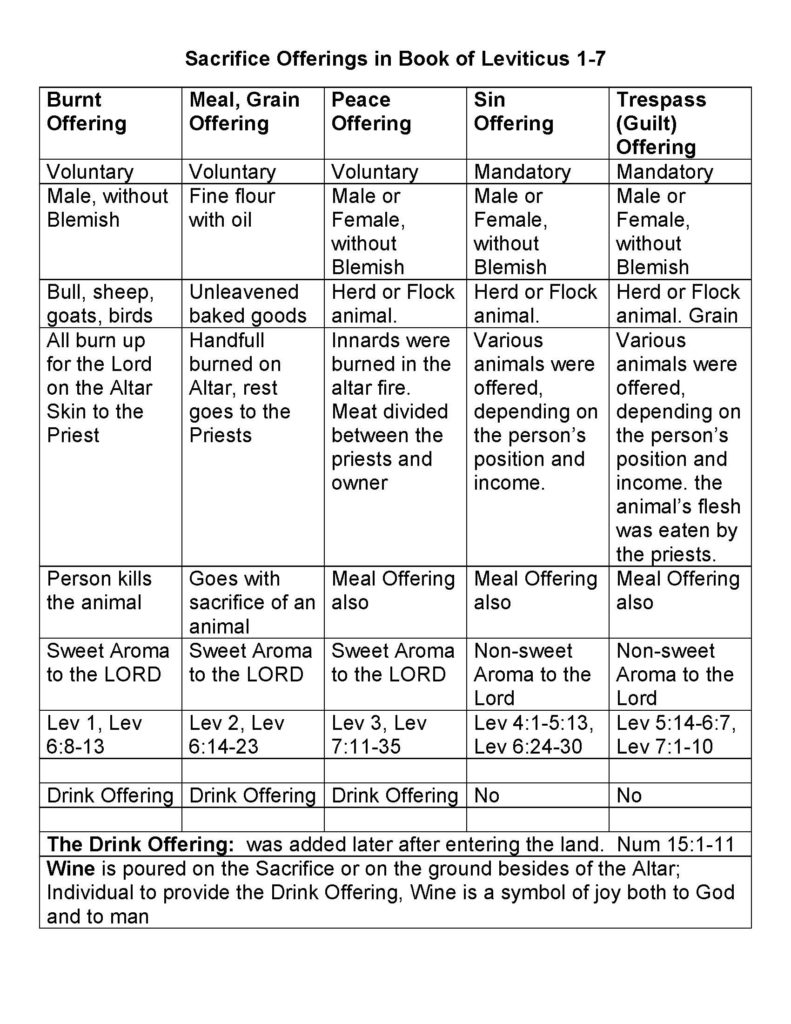 What about sacrifices on the Altar’s

Genesis 3:21 Also for Adam and his wife the LORD God made tunics of skin, and clothed them.   {first animal sacrifice-what animal, clothes, shoes}

Innocent blood had to be slain, to cover up the first sin, first sacrifice

Genesis 4:3-5 And in the process of time it came to pass that Cain brought an offering of the fruit of the ground to the LORD. (4) Abel also brought of the firstborn of his flock and of their fat. And the LORD respected Abel and his offering, (5) but He did not respect Cain and his offering. And Cain was very angry, and his countenance fell.

Cain’s offering of first fruits might have been acceptable as a “meal or grain offering” if it had been founded upon a slain lamb and had followed as a consequence from that sacrifice; therefore his offering was not acceptable  to God.  They knew about sacrifices.  I know there are other reasons, but this is a very important one.

God’s Covenant with Noah, an Altar where blood sacrifices are done

Genesis 8:20-21 Then Noah built an altar to the LORD, and took of every clean animal and of every clean bird, and offered burnt offerings on the altar. (21) And the LORD smelled a soothing aroma. Then the LORD said in His heart, “I will never again curse the ground for man’s sake, although the imagination of man’s heart is evil from his youth; nor will I again destroy every living thing as I have done.

Important information, why does the Lord like clean animal sacrifices, because He loves the smell of the sacrifice as a soothing aroma.

Now, what about Abram and his Altar

Genesis 12:7 Then the LORD appeared to Abram and said, “To your descendants I will give this land.” And there he built an altar to the LORD, who had appeared to him.    {an Altar of Praise; vs. 1-7}

Genesis 12:8 And he moved from there to the mountain east of Bethel, and he pitched his tent with Bethel on the west and Ai on the east; there he built an altar to the LORD and called on the name of the LORD.{Altar of Prayer}

Genesis 13:18 Then Abram moved his tent, and went and dwelt by the terebinth trees of Mamre, which are in Hebron, and built an altar there to the LORD.  {Altar of Peace, vs. 14-18}

The Lord’s Unconditional Covenant with Abraham

Genesis 17:11 and you shall be circumcised in the flesh of your foreskins, and it shall be a sign of the covenant between Me and you.

This is an everlasting one way covenant that would last through all time and the Lord pledged His ongoing relationship with the people of Abraham.

Genesis 17:19 Then God said: “No, Sarah your wife shall bear you a son, and you shall call his name Isaac; I will establish My covenant with him for an everlasting covenant, and with his descendants after him.  {Israel}

We will continue the study to Part 2, ran out of time due to heavy discussion.