First let’s notice up front, the Revelation is singular, not plural.

Revelation:  means The Unveiling or Disclosure 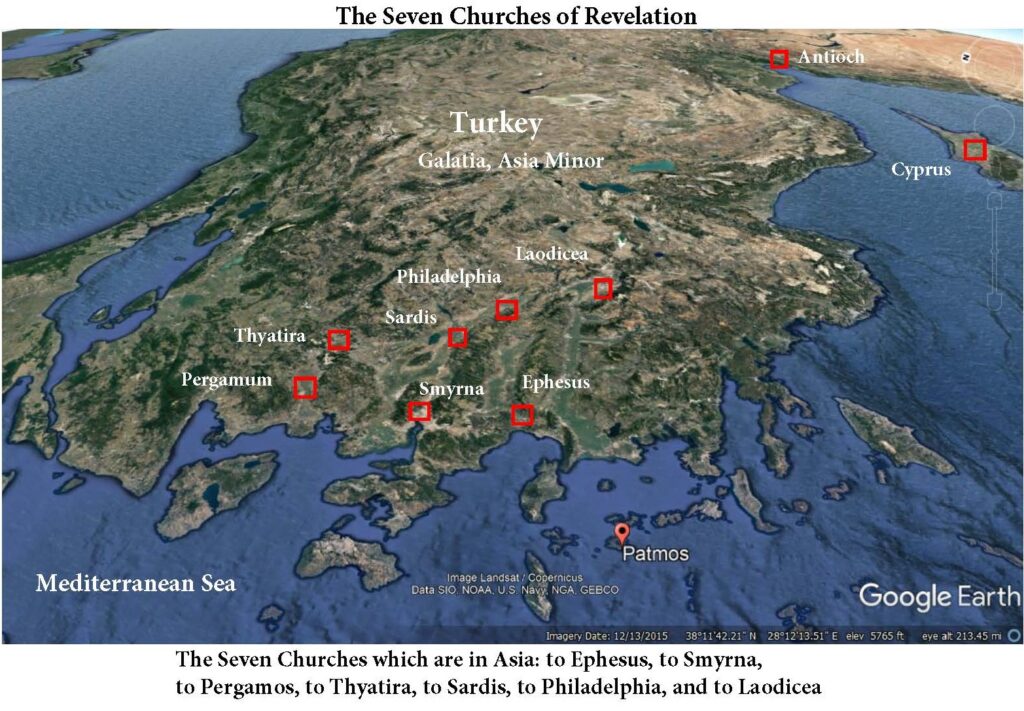 Apostle John, the Author of:

Patmos is a small island, 6 miles by 10 miles, 40 miles from Miletus and 24 miles from the coast of Turkey. John was exiled by Domitian (A.D. 81-96), the brother of Titus who destroyed Jerusalem. According to Irenaeus (2nd century A.D.), Revelation was written by John during the reign of Domitian.

Irenaeus, Clement, and Eusebius wrote that after Domitian died, John returned to Ephesus, went to the churches, and appointed leaders, and set things in order.

Revelation 1:1 The Revelation from Jesus Christ, which God gave him to show his servants what must soon take place. He made it known by sending his angel to his servant John,

The Revelation: Be revealed, Unveiling, disclosure. The curtain of the future is lifted and shows us what is going to happen.

Of Jesus Christ: Revelation is made by Jesus and John wrote it down on what he was told and saw and then give to the Saints

Revelation 1:2 who testifies to everything he saw—that is, the word of God and the testimony of Jesus Christ.

We will find that all things that John saw are “visions” of the Book of Revelation.

Testifies means: to give evidence as a witness in a court of law, bear witness, be a witness, give one’s testimony,

John testifies to everything he saw and wrote it down

Word of God: The phrase, Word of God is used of both the Scriptures and the Person of Jesus.

The Word of God is inspired:

2 Timothy 3:16 All Scripture is God-breathed and is useful for teaching, for reproof, for correction, and for training in righteousness,

The Word of God is truth:

The Word of God sets you free:

John 8:32 And you will know the truth, and the truth will set you free.“

The Word of God produces faith:

Romans 10:17 So then faith comes by hearing, and hearing by the word of God.

Is one of the Blessing from Revelation is faith.

The Word of God is Lord Jesus:

John 1:14 The Word became flesh and made his dwelling among us. We have seen his glory, the glory of the one and only Son, who came from the Father, full of grace and truth.

The Testimony of Jesus

Revelation 1:3 Blessed is he who reads and those who hear the words of this prophecy, and keep those things which are written in it; for the time is near.

Read; Hear; Keep:  This is the only book with a special promise if you do these three things.

This is the first of many Blessings in the Book of Revelation if we do these things.

Greetings to the Seven Churches

Revelation 1:4 John, to the seven churches which are in Asia: Grace to you and peace from Him who is and who was and who is to come, and from the Seven Spirits who are before His throne,

The number 7 indicates in Scriptures fulness, perfection, a sacred number.  We will notice There are seven churches, seven spirits, seven seals, seven trumpets, seven thunders, seven vials, etc.  7 is all throughout the Book.

7 churches are located in the western part of modern day Turkey, a Roman Province of Asia.

1st time:  who is and who was and who is to come:  Jesus, the Gospel

Revelation 1:5 and from Jesus Christ, the faithful witness, the firstborn from the dead, and the ruler over the kings of the earth. To Him who loved us and washed us from our sins in His own blood,

3 Names of Jesus:  The faithful witness, Firstborn from the dead; The ruler over the kings of the earth

These descriptions of Jesus will be used throughout the Book of Revelation and the Bible by explaining what they mean. When we see these terms, we will know it will be talking about Jesus.

Ruler of the King

1 Timothy 6:15 At the right time, he will make him known. God is the blessed and only Ruler, the King of kings and Lord of lords.

Blood of Jesus washed us {cleanses} us from all sin.

1 John 1:7 But if we keep living in the light as he himself is in the light, we have fellowship with one another, and the blood of Jesus his Son cleanses us from all sin.

Revelation 1:6  and has made us kings and priests to His God and Father, to Him be glory and dominion forever and ever. Amen.

Kings and priests”:  This is importance to each of us for the future

Revelation 5:10  And have made us kings and priests to our God; And we shall reign on the earth.”

Daniel 7:14 Then to Him was given dominion and glory and a kingdom, That all peoples, nations, and languages should serve Him. His dominion is an everlasting dominion, Which shall not pass away, And His kingdom the one Which shall not be destroyed.

Revelation 1:7 Behold, He is coming with clouds, and every eye will see Him, even they who pierced Him. And all the tribes of the earth will mourn because of Him. Even so, Amen.

Tribes do not want to be under the rule of our Creator.  Jesus’ ascension was in the clouds and will come back the same way, in the clouds.  We have covered many Scriptures throughout the Bible on this.

Coming with the clouds

Matthew 24:30 Then the sign of the Son of Man will appear in the sky, and all ‘the tribes of the land will mourn‘ when they see ‘the Son of Man coming on the clouds of heaven‘ with power and great glory.

Revelation 1:8 “I am the Alpha and the Omega, the Beginning and the End,” says the Lord, “who is and who was and who is to come, the Almighty.”

2nd time:  who is and who was and who is to come:  Jesus, the Gospel

Jesus was at the beginning and end of our lives, Beginning of time of creation, etc.  We will see this term many times in the Book of Revelation.  [21:6, 22:13}

Isaiah 41:4 Who has performed and carried this out, calling the generations from the beginning? I, the LORD; the first and will be with the last; I am the One!”  {am He}

Jesus is saying He was with the very first Generation {Adam and Eve} to the very last generation.

Vision of the Son of Man

Revelation 1:9 “I, John, both your brother and companion in the tribulation and kingdom and patience of Jesus Christ, was on the island that is called Patmos for the Word of God and for the Testimony of Jesus Christ.

John was a prisoner on the island during Domitian’s reign from 86 to 96 AD because of the Word of God and Testimony of Jesus.

Revelation 1:10 I came to be in the Spirit on the Day of the Lord, when I heard a loud voice behind me like a trumpet,

“The Day of the Lord”, in the Spirit {vision), with the trumpets we know about

Revelation 1:11 saying, “I am the Alpha and the Omega, the First and the Last,” and, “What you see, write in a book and send it to the seven churches which are in Asia: to Ephesus, to Smyrna, to Pergamos, to Thyatira, to Sardis, to Philadelphia, and to Laodicea.”

Why these seven churches?  We need to realize there are things written in Chapter 2 and 3 of Revelation that pertain to you, me and us as a group of the concerns that are found.

The seven churches in the province of Asia each received the whole Book of Revelation on the mail route, and each received an individual letter from Christ

Revelation 1:12 Then I turned to see the voice that spoke with me. And having turned I saw seven golden lampstands,

Revelation 1:13 and in the midst of the seven lampstands One like the Son of Man, clothed with a garment down to the feet and girded about the chest with a golden band.

Son of man:  is always means Lord Jesus from other Scriptures

In the midst. Of the church and we know will be with us always.

Matthew 28:20 teaching them to observe all things that I have commanded you; and lo, I am with you always, even to the end of the age.” Amen.

Matthew 18:20 For where two or three are gathered together in My name, I am there in the midst of them.”

Josephus tells us that the priests were girded about the breasts, not the loins.  We see Jesus as our Great High Priest, with garment down to His feet and His chest has a golden band.

Revelation 1:14 His head and hair were white like wool, as white as snow, and His eyes like a flame of fire;

Daniel 7:9 “As I looked, “thrones were set in place, and the Ancient of Days took his seat. His clothing was as white as snow; the hair of his head was white like wool. His throne was flaming with fire, and its wheels were all ablaze.

Thrones:  The Father and Lord Jesus

Revelation 1:15 His feet were like fine brass, as if refined in a furnace, and His voice as the sound of many waters;

Does feet show power trampling upon his enemies and His voice meaning His Gospel as preached by his ministers worldwide,  {Rom 10:18}

Revelation 1:16 He had in His right hand seven stars, out of His mouth went a sharp two-edged sword, and His countenance was like the sun shining in its strength.

The seven stars are “the angels of the seven churches, verse 20.

Hebrews 4:12 For the Word of God is living and active, sharper than any double-edged sword, piercing until it divides soul and spirit, joints and marrow, as it judges the thoughts and purposes of the heart.

Daniel 10:5 I looked up and there before me was a man dressed in linen, with a belt of fine gold from Uphaz around his waist.

Revelation 1:17 And when I saw Him, I fell at His feet as dead. But He laid His right hand on me, saying to me, “Do not be afraid; I am the First and the Last.

Third time Jesus said this.  A believer falls at the feet of Jesus,

Revelation 1:18 I am He who lives, and was dead, and behold, I am alive forevermore. Amen. And I have the keys of Hades and of Death.

Jesus just said He lived as a man, died on the Cross and now alive in His glorified resurrection state.

Jesus just said He has authority over those who have died physically and over their present resting place, which will be emptied and destroyed at the time of the great white throne judgment

This is a summary or break down of the Book of Revelation.

Mystery of the seven lampstands are the seven churches.

What was Israel commission, to bare the light and that is why the Menorah (7 candle stick holder) is the official symbol of Israel today and not the Star of David on their flag.  Israel was intended to be the proclaimers of the Creator to all nations.