Jesus Triumph Entry into Jerusalem symbolizing that Jesus is the Messiah.

As the Scriptures is written:

John 12:15 “Stop being afraid, people of Zion. Look, your king is coming, sitting upon a donkey’s colt!”

John 12:16 At first his disciples didn’t understand these things. However, when Jesus had been glorified, they remembered that these things had been written about him and that people had done these things to him 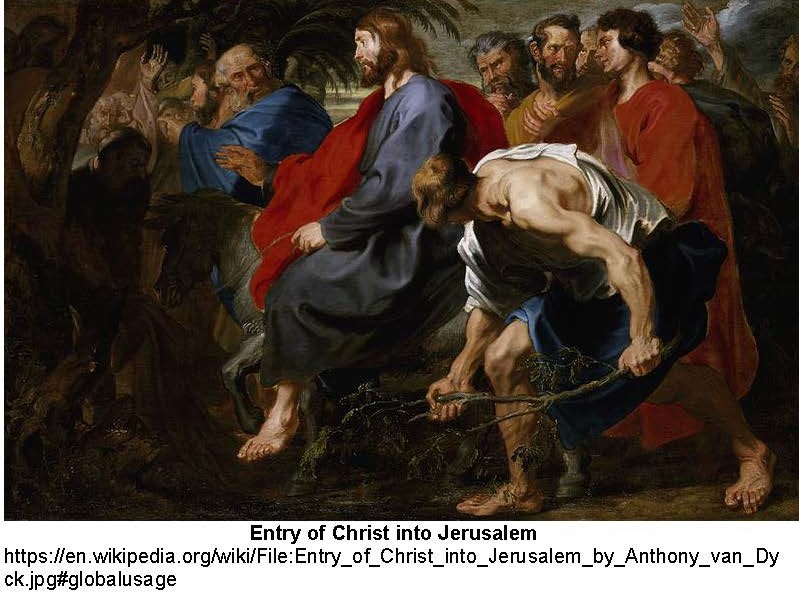 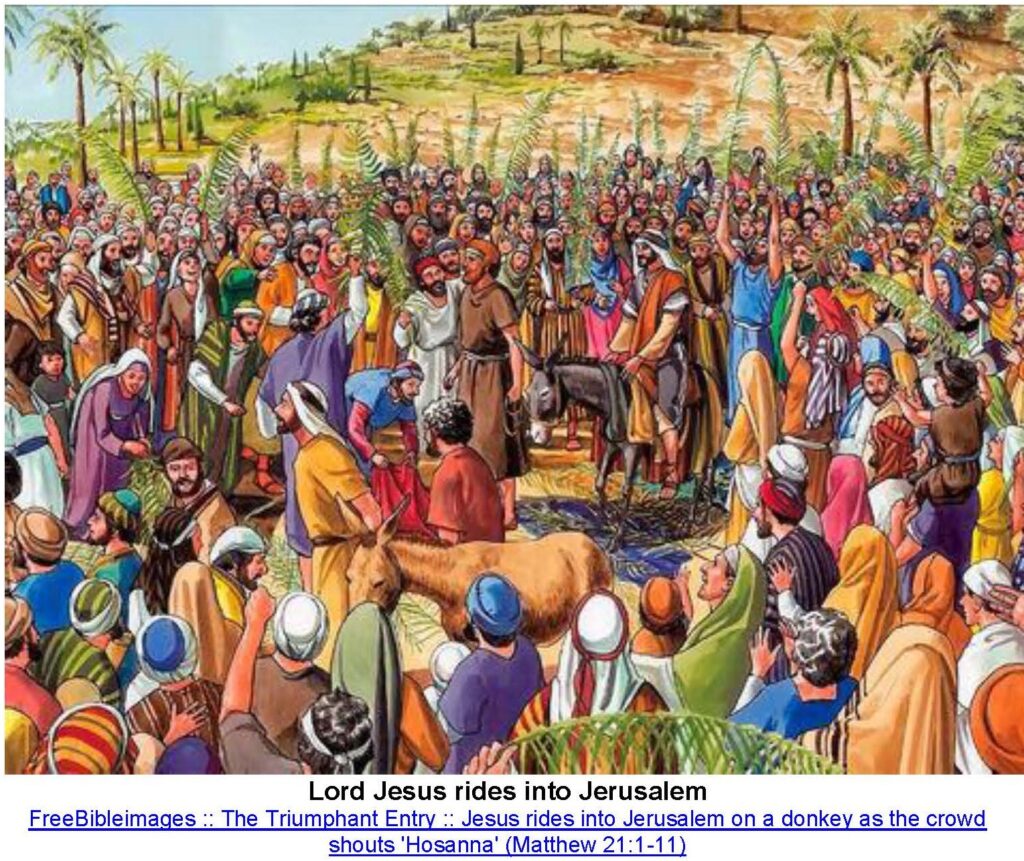 The disciples did not catch the prophetic significance of Jesus’ act riding on a donkey.

Remember riding a donkey was the animal of a man of peace, a priest, a merchant or the like. It might also be used by a person of importance but in connection with peaceable purposes. A conqueror or King would ride into the city on a war horse, or perhaps march in on foot at the head of his troops.

After Jesus was glorified: After Christ’s death, resurrection, and ascension, the disciples with the Holy Spirit finally had their eyes open and now understood that the OT prophecies concerning the Messiah had been fulfilled in Jesus.

Jesus rides on a white horse as a conquering Hero.

Zechariah 9:9 Rejoice greatly, Daughter Zion! Shout, Daughter Jerusalem! See, your king comes to you, righteous and victorious, lowly and riding on a donkey, on a colt, the foal of a donkey.

Revelation 19:14 The armies of heaven were following him, riding on white horses and dressed in fine linen, white and clean.

John 12:17 So the crowd that had been with him when he called Lazarus out of the tomb and raised him from the dead continued to testify to what they had seen.

It appears that the people who had seen Jesus raise Lazarus from the dead, were publishing and telling everyone in many countries around Jerusalem about the miracle, which increased the popularity of Jesus, and made the envy of the Jewish Leadership worse with deep hatred.

The witness of the resurrection of Lazarus were declaring they were eye and ear witness of the whole, and that it was a truth that might be depended on.

John 12:18 The crowd was going out to meet Jesus because they had heard that he had performed this sign.

This was a main reason, among others, which cause people to come out with palm tree branches in their hands and great Jesus the king of Israel, and singing Psalms 118 as Jesus entered into the city:

Matthew 21:8-9 A very large crowd spread their cloaks on the road, while others cut branches from the trees and spread them on the road.  (9)  The crowds that went ahead of him and those that followed shouted, “Hosanna to the Son of David!” “Blessed is he who comes in the name of the Lord!” “Hosanna in the highest heaven!”

They heard the many witnesses and the proofs they gave was so strong, they firmly believe it, being the most amazing miracle of raising Lazarus from the dead after four days.  Jairus’s daughter just died, Widow son was not buried when raised from the dead.

Jesus other miracles in some ways made very little impression on people, but this miracle of Lazarus had convinced even the Jewish Leadership.

John 12:19 Then the Pharisees told one another, “You see, there is nothing you can do. Look, the world has gone after him!”

After these verses, we can see why the Jewish Leadership wanted to hasten Jesus and Lazarus to be put to death.

The world, Indeed, have come to Jesus, More than the Jews, even Greeks.

John 12:20 Now some Greeks were among those who had come up to worship at the festival.

The fact that these Greeks came to Jerusalem to worship at the feast indicates that they were probably Jewish proselytes.

Perhaps John was hinting that the salvation rejected by many of the Jews was already passing to the Gentiles.

The Greeks would not be allowed to eat the Passover, unless they were proselytes

Exodus 12:48 “A foreigner residing among you who wants to celebrate the LORD’s Passover must have all the males in his household circumcised; then he may take part like one born in the land. No uncircumcised male may eat it.

John 12:21 They went to Philip (who was from Bethsaida in Galilee) and told him, “Sir, we would like to see Jesus.”

Sir, we would see Jesus: Why does John mention them at this point? Because the King, Jesus has now been rejected by Israel.  Maybe they just wanted to find out more about Jesus, the great teacher from Galilee.

Who knows, they may have already knew Philip because of all the Greeks living in Galilee.

Andrew {has a Greek name} was also of Bethsaida, and he and Philip seem to have been inseparable friends.  Philip had a Greek name, so the visitors wanting to see Jesus came to him; and he took the matter to Andrew, who also had a Greek name. (Whenever you find Andrew in John’s Gospel, he is bringing some-body to Jesus: What an example as a soul-winner!)

John 12:23 Jesus told them, “The hour has come for the Son of Man to be glorified.

Prior to this very moment, Jesus had stated 2 times that His hour had not yet come Now the time had come for Christ to die and be raised from the dead

John 7:6 Jesus told them, “My time has not yet come, but your time is always here.

Did Jesus just tell this to Philip and Andrew only or was the Greeks there.  It depends on where they were in the Temple, Probably just the two, because they went to Jesus in the Temple.

Jesus did not directly answer the disciples about meeting the Greeks.

Jesus is saying he must die, then by rising from the dead, ascending to heaven, sitting at the right hand of God, and from there pouring forth the Holy Spirit upon his disciples, who should go and preach the Gospel.

John 12:24 Truly, I tell all of you with certainty, unless a grain of wheat falls into the ground and dies, it remains alone. But if it dies, it produces a lot of grain.

Jesus is saying, life comes by death.  Jesus is saying He must die and his death would produce much fruit and would result in many living for Jesus.

1 Corinthians 15:36-38 You fool! The seed you plant does not come to life unless it dies, (37) and what you plant is not the form that it will be, but a bare kernel, whether it is wheat or something else.  (38)  But God gives the plant the form he wants it to have, and to each kind of seed its own form.

Do we not die from baptism, burial, and come up out of the water and now we can produce righteous character and bear fruit, when we receive the Holy Spirit by laying on hands?

John 12:25 The one who loves his life will destroy it, and the one who hates his life in this world will preserve it for eternal life.

loves his life describes those who serve only themselves and Hates his life involves serving Christ. Each believer must establish his or her priorities in this life.   {simple instruction}

Luke 9:24 because whoever wants to save his life will lose it, but whoever loses his life for my sake will save it.

Hebrews 11:13-16 All these people died having faith. They did not receive the things that were promised, yet they saw them in the distant future and welcomed them, acknowledging that they were strangers and foreigners on earth.  (14)  For people who say such things make it clear that they are looking for a country of their own.  (15)  If they had been thinking about what they had left behind, they would have had an opportunity to go back.  (16)  Instead, they were longing for a better country, that is, a heavenly one. That is why God is not ashamed to be called their God, because he has prepared a city for them.   {Are we longing for our change when Jesus Returns}

Revelation 3:21 To the one who conquers I will give a place to sit with me on my throne, just as I have conquered and have sat down with my Father on his throne.

This is a chosen, willing service to be where Jesus is, that simply wants to be close to the Master.

The Son of Man Must Be Lifted Up: The reason behind Jesus’ prayers.

John 12:27 “Now my soul is troubled, and what shall I say? ‘Father, save me from this hour’? No, it was for this very reason I came to this hour.

Psalms 6:3 My soul also is greatly troubled; But You, O LORD—how long?

Notice this is a few days before Passover that Jesus’ agony over His impending death was not just confined to the garden where He prayed 3 times.

John 12:28 Father, glorify your name.” Then a voice came from heaven, “I have glorified it, and I will glorify it again!”

Voice from Heaven – encouragement and approval of Jesus

The 3rd time God broke the silence of heaven, Glorify the Father Name

As Jesus thought of the cross was just a few days away, His main concern now was to glorify the name and character of the Father.

The saddest tragedy of human history (The Cross) was the purpose of His coming, and was also the greatest victory of all history.

Matthew 23:37-39 “O Jerusalem, Jerusalem, who kills the prophets and stones to death those who have been sent to her! How often I wanted to gather your children together as a hen gathers her chicks under her wings, but you were unwilling!  (38)  Look! Your house is left abandoned!  (39)  I tell you, you will not see me again until you say, ‘How blessed is the one who comes in the name of the Lord!'”

Whatever we do should do, be in the name of the Lord Jesus.

John 12:29 The crowd standing there heard this and said that it was thunder. Others were saying, “An angel has spoken to him.”

The Father answers from heaven that His Name has been glorified (through the obedient ministry of His Son, Jesus), and it will be glorified again (through the death, burial, and resurrection of the Son, Jesus)

It was not clear to all what was said; but hearing only a sound or unintelligible voice.

Remember the Apostle Paul heard the voice of Jesus and understood what was said.

Acts 9:4 He fell to the ground and heard a voice say to him, “Saul, Saul, why do you persecute me?”

Acts 22:9 My companions saw the light, but they did not understand the voice of him who was speaking to me.

It was the opinion of many of the Jewish people that God did not speak to men except by the ministry of angels,

Why did they think an angel spoke these words?

Hebrews 2:2-3 because if the message spoken by angels was reliable, and every violation and act of disobedience received its just punishment,  (3)  how will we escape if we neglect a salvation as great as this? It was first proclaimed by the Lord himself, and then it was confirmed to us by those who heard him,

Galatians 3:19 What purpose then does the law serve? It was added because of transgressions, till the Seed should come to whom the promise was made; and it was appointed through angels by the hand of a mediator.

Remember, the angels are the helper of our Lord Jesus and who is our mediator with Father today, but the Lord Jesus

John 12:30 Jesus replied, “This voice is for your benefit, not for mine.

Jesus wanted to give the disciples proof that He is the Messiah; that you may remember it when I am departed, and be yourselves comforted, supported, and saved.