Now, we are going to fly through the first few years of Jesus ministry. 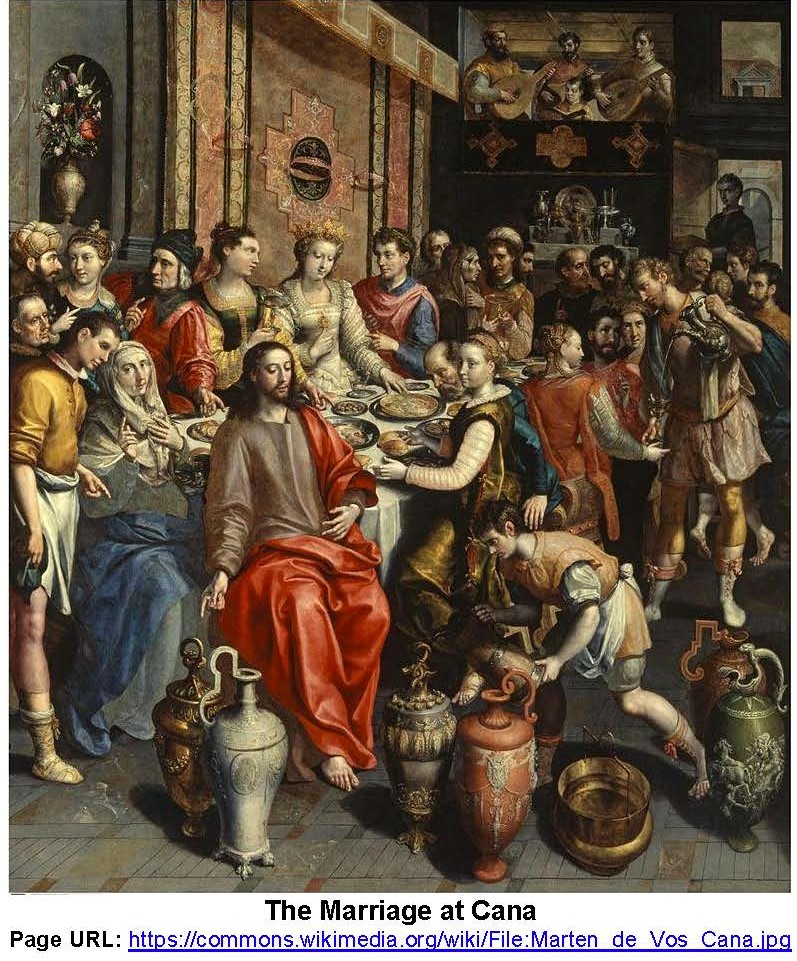 John 2:1 On the third day there was a wedding in Cana of Galilee, and the mother of Jesus was there.

As Joseph is never mentioned as living after Jesus entered upon his ministry, he is supposed to have died before this time.

John 2:2 Now both Jesus and His disciples were invited to the wedding.

John 2:3 And when they ran out of wine, the mother of Jesus said to Him, “They have no wine.”

Mary asking Jesus to help when the wine ran out is another indication that she was in some way related to the family holding the wedding.  Jesus and friends might have received a last minute invite and cause a shortage of wine.  Jesus first miracle was making wine.

John 2:4 Jesus said to her, “Woman, what does your concern have to do with Me? {or why do you involve me} My hour has not yet come.”

“Woman;” means specifically a wife, a betrothed; actually an expression of respect, gentle and affection; not one of abuse.

The choice of woman over the word for “mother indicates to Mary she could not exercise her authority over His religious work.

The mother of Jesus is never called Mary in this Gospel. She became John’s “mother”.  2 John calls her Lady chosen by God.  John was given stewardship over Mary by Jesus at the Cross, and maybe calling her “Mary” was odd for him and her being older.

It is the same word; mother by which he tenderly addressed his mother when he was on the cross

My hour has not yet come seems to mean that the time for Jesus to publicly work miracles, declaring Himself the Messiah, had not yet come

Absence of Joseph: Most commentators believe he had died.

John 2:5 His mother said to the servants, “Whatever He says to you, do it.”

Mary, with some authority (family member – Priestly line) told the servants to do it.

This is probably the last recorded words of Mary in the Bible.

John 2:6 Now there were set there six water jars of stone, according to the manner of purification of the Jews, containing twenty or thirty gallons apiece.

These water-pots were to supply water {spring or rain} for the washings usual at feasts, to purified themselves with ashes of the red heifer. The Jews were regarded ceremonially unclean if they did not wash both before and after eating.  Probably a Priest Home.

Because the roads were not paved and people wore sandals, water was needed for foot washing. At a large Jewish wedding, a large amount of water would have been required and there were set vessels of various sizes to wash hands and feet in; one vessel was a large pitcher, or basin, out of which the whole company washed their hands and their feet; and there was another was a lesser and beautiful basin, which was set alone for the more honorable persons, as for the bride, and for any gentlewoman; and such might be these six stone jars, or pots:

John 2:7-8 Jesus said to them, “Fill the water jars with water.” And they filled them up to the brim. (8) And He said to them, “Draw some out now, and take it to the master of the feast {banquet}.” And they took it.

The master was the head waiter and responsible for seating the guests and the correct running of the feast.  {Wedding Planner}

Some say this was grape juice, but the problem is Grapes were harvested in the autumn. No refrigeration available, so no grape juice was available in the spring (i.e. Passover, et al.); The Greek word for unfermented grape juice is never used in the NT.

John 2:10 And he said to him, “Every man at the beginning sets out the good wine, and when the guests have well {or too much to} drunk, then the inferior. You have kept the good {best} wine until now!”  {Common practice use less quality wine last}

He tasted the water that had turned to wine: it was excellent wine. The best saved to the last. It doesn’t sound like this was grape juice

John 2:11 This beginning of signs Jesus did in Cana of Galilee, and revealed His glory; and His disciples believed in Him.

The miracle performed here was to convince the disciples and to make their faith firmer that He is and His miracles point to; He is the Messiah.

This was Jesus’ first recorded miracle after His baptism.

John 2:12 After this He went down to Capernaum, He, His mother, His brothers, and His disciples; and they did not stay there many days {for a few days}.

Cana was in the highlands {mountains} and Capernaum was on the NW shore of the Sea of Galilee, which was below sea level.  Jerusalem, was situated on the top of a hill.

John 2:13 Now the Passover of the Jews was at hand, and Jesus went up to Jerusalem.

Passover: First of four Passovers  after beginning His ministry; This is His first visit as the Messiah.  Remember, Jerusalem was in the high elevation, there we will go up to the City.  {Male Jews must go to Jerusalem during Passover to sacrifice a lamb}.

John 2:14  And He found in the temple {courts} those who {people} sold oxen and sheep and doves, and the money changers {siting at their tables} doing business.

In the Court of the Gentiles, which was within the temple walls.

The priests made a monopoly of it and installed selling of the animal and money changer right in the temple courtyard.  Money changers would sit, the seller of animals would stand.

Money changers and selling of animals were necessary; they were just in the wrong place; inside a place of worship of the Temple.  Because of the large crowds who came to Jerusalem to sacrifice, this would have been proper enough if it had been conducted at stockyards.

For profit, the people had to pay a half-shekel annually to support the Temple, could not use Roman money, had to use and was furnished Jewish coin at a heavy exchange charge or rate.  The Priest alone cleared about $300,000 per year in this exchange.

Matthew 21:13 He told them, “It is written, ‘My house is to be called a house of prayer,’ but you are turning it into a hideout for bandits {or den of thieves}!”

John 2:15-16 When He had made a whip {out} of cords, He drove them all out of the temple {courts}, with the sheep and the oxen, and poured out {or scattered} the changers’ money and overturned the tables. (16) And He said to those who sold doves, “Take these things away! Do not make My Father’s house a house of merchandise!” {or a marketplace}

Notice; My Father: Not Our Father:  The expression My Father’s house was a distinct claim to Messiahship.  Jesus just said He is the Son of God and claiming to be the Messiah.

Most people have the impression that Jesus was only meek, gentle and compassionate.  Here we see him in a different light—as the “wrath of the lamb!”

John 2:17 Then His disciples remembered that it was written, “Zeal for your house will consume {has eaten} me.“

Zeal of your house

Psalms 69:9 Because zeal for Your house has eaten me up, And the reproaches of those who reproach You have fallen on me.

The disciples understood that Jesus was claiming to be the Messiah.  The Jewish did not really do anything against Jesus.

John 2:18 So the Jews answered and said to Him, “What sign do You show to us, since You do these things?”

The Jewish officials demand some sign or authority that would demonstrate that he had authority over the Temple to close down the market.  They require a miracle, to confirm a miracle. This time they only ask a sign, but next appearance at Jerusalem they sought to kill Him for speaking of His Father

John 2:19 Jesus answered and said to them, “Destroy this temple, and in three days I will raise it up.”

Jesus was talking about His own body. The sign that he would give the Jewish nation was his Resurrection.

The Jews did not understand him, nor his own disciples, until after he rose from the dead.  The Jews think Jesus was referring to the Temple buildings.

John 2:20 Then the Jews said, “It has taken forty-six years to build this temple, and will You raise it up in three days?”

It had been forty-six years since Herod the Great started upgrading (about 18 BC) began the reconstruction of the physical Temple, and it was not yet entirely completed. 46 years suggest this time around 28 AD.  When Jesus was on trial before the Sanhedrim, these words were brought up as blasphemy.

The Temple construction continued thirty – six years longer, till within six or seven years of the destruction of the state, city, and temple by the Romans in 70 AD.  If Jesus was born around 2 BC, this would make Him around 30 or priesthood age.

John 2:21 But He {Jesus} was speaking of the Temple of His body.

Notice Jesus also think of His body as a Temple

John 2:22 Therefore, when He had risen from the dead, His disciples remembered that He had said this to them; and they believed the Scripture and the word which Jesus had said.

This happen 3 years after when disciples remembered he had said this, to them and believed after he rose from the dead.

Psalms 16:10 For You will not leave my soul in Sheol, Nor will You allow Your Holy One to see corruption.

Jesus Knows What Is in Man

John 2:23 Now when He was in Jerusalem at the Passover, during the feast, many believed in His name when they saw the signs {He was performing, miracles} which He did.

The miracles Jesus did, they saw at this time are not recorded in the Scriptures.  They are alluded to again in John 3:2.

Many believed that he was a man / teacher / promised Messiah sent from God, but did not really trust or believe in him to the salvation of their souls:

Faith growing out of miracles would be likely cease when the miracles ceased. For ‘miracles’ must have and read signs,

Jesus took occasion to work miracles, and to preach at that time, for a great multitude were present from all parts of Judea. It was a favorable opportunity for making known God doctrines and showing the evidence that he was the Christ.

John 2:24 But Jesus did not commit {or entrust} Himself to them, because He knew all men {or people}.

For we find that their hearts were not at all changed, because Jesus could not trust or commit himself to them, because He knew the fickleness and inconstancy of the people.  He knew how easily they might be turned against him by the Jewish leaders.

These individuals trusted Jesus, but Jesus did not entrust Himself to them, who trust only because of miracles. Remember when all the disciples left him except for the 120.

We can love people without entrusting ourselves to them

John 2:25 and had no need that anyone should testify of man, for He knew what was in {each person or} man.

Jeremiah 17:9 “The heart is deceitful above all things, And desperately wicked; Who can know it?

Jesus knows the hearts of people. He reads people like we read billboards, another indication of His deity.  God alone was said to know the hearts of all people,  Jesus still loves individuals and gave himself as a sacrifice.

1 Kings 8:39 then hear in heaven Your dwelling place, and forgive, and act, and give to everyone according to all his ways, whose heart You know (for You alone know the hearts of all the sons of men),