Philip, the Deacon and Evangelist

Let’s look at the character, life and person of Philip, the Deacon.

Philip was first mention, about A.D. 35-36, and in 3 sections of Book of Acts.  Very little is known about Philip. 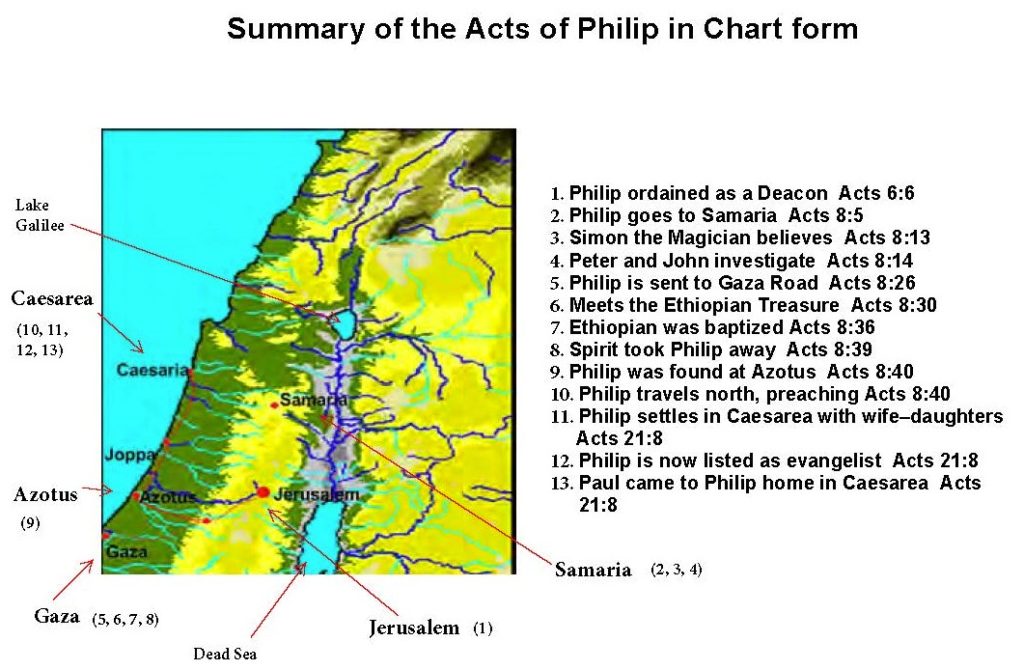 Acts 6:1 Now in those days, when the number of the disciples was multiplying, there arose a complaint against the Hebrews by the Hellenists, because their widows were neglected in the daily distribution.

The Hellenists were Jews born out of Palestine. They were so called, because they spoke the Greek language.

The ‘Hebrews’ were the pure Jews who, not residing necessarily in Palestine, still used the Hebrew Scriptures and spoke the dialect of the sacred tongue then current—the Aramaic. The distinction between the Grecians and the Hebrews was not one of nationality, but of language.

(2)  Then the twelve summoned the multitude of the disciples and said, “It is not desirable that we should leave the word of God and serve tables.

They are never called deacons, but the Greek word rendered to serve, is the verb form of which the word deacon is the noun. The usual view is that they were deacons.

The start of “deacons”—men who serve.

Serve:  means to be an attendant, use the office of a deacon.

(3)  Therefore, brethren, seek out from among you seven men of good reputation, full of the Holy Spirit and wisdom, whom we may appoint over this business;

Seven – means completeness, perfection, and wholeness, used over 700 times in the Bible

Of honest report. a reputation was a guarantee that they would handle the trust faithfully.

Full of the Holy Spirit. Whose lives indicated the fruit of the Spirit.

Of wisdom. Prudence, discretion and judgment would be essential.

Whom we may appoint. The Apostles Ordain Philip into the office.

(4)  but we will give ourselves continually to prayer and to the ministry of the word.”

This was the Apostles primary purpose.  Observe that the apostles regard prayer of equal importance with preaching, but prayer was mention first.

(5)  And the saying pleased the whole multitude. And they chose Stephen, a man full of faith and the Holy Spirit, and Philip, Prochorus, Nicanor, Timon, Parmenas, and Nicolas, a proselyte from Antioch,

The names are all Greek.  Remember, the Jews to have two names, one Hebrew and the other Greek / Roman

They chose Stephen. He is specially described on account of the glory of martyrdom that so soon followed.

Philip. Distinguished as “Philip the evangelist.” The others are not really mentioned again. 2nd name after Stephen in the group of 7.

Proselyte:  someone who had been converted to Judaism and been circumcised.  A Gentile.

(6)  whom they set before the apostles; and when they had prayed, they laid hands on them.

Prayed first, then Laid hands on Philip:  Confirm to this office.  Notice Philip received his commission and authority from the apostles.

(7)  Then the word of God spread, and the number of the disciples multiplied greatly in Jerusalem, and a great many of the priests were obedient to the faith.

“..many of the priests”: They actually converted members of the priesthood. Is this why the Jewish Leadership went after the Church. 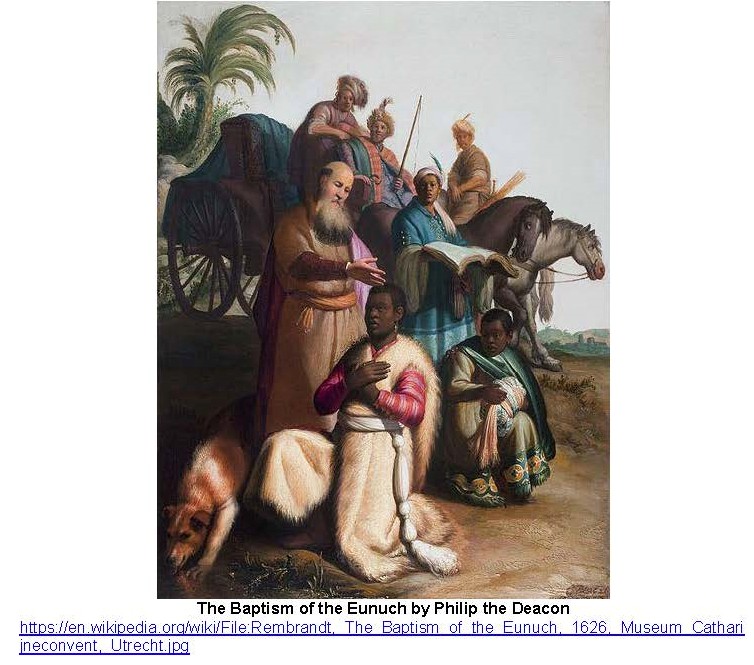 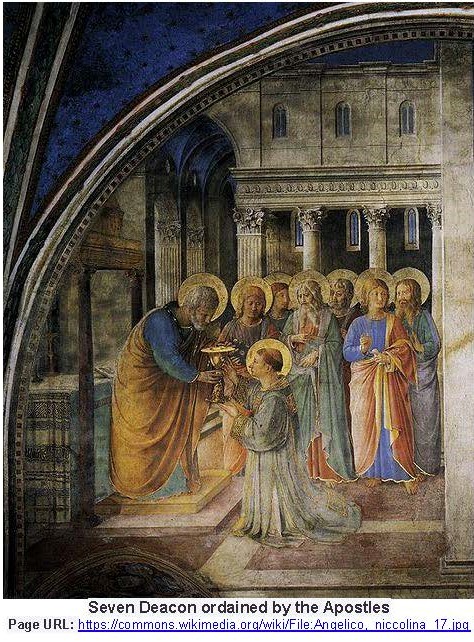 Acts 8:3 But Saul kept trying to destroy the church. Going into one house after another, he began dragging off men and women and throwing them in prison.

Act 8:4 Therefore those who were scattered went everywhere preaching the word.

Scattered saints:  Because of persecution in Jerusalem by Paul

(5)  Then Philip went down to the city of Samaria and preached Christ to them.

City of Samaria is north of Jerusalem (on a high hill). Down means going down hill.

Saul’s persecution drove Philip to Samaria. The Samaritans were looked down upon by the Jews; they were sometimes viewed as: half-Jews or just hated by the Jews.

(6)  And the multitudes with one accord heeded the things spoken by Philip, hearing and seeing the miracles which he did.

Philip was quite a speaker and did miracles and healings by the Holy Spirit and received a warm welcome among the Samaritans who came to hear the word.

Remember, Jesus went first to Samaria and talked with the women at the well, then stayed for two days and preached the Kingdom of God.

Unclean spirits {impure spirits} resisted to come out of many who were possessed; Individuals who were paralyzed; and lame were healed; by speaking in the Name of Jesus.

The change to the city people brought on by the Gospel, as well as the healing of the sick and afflicted individuals which were restored to health.

(9)  But there was a certain man called Simon, who previously practiced sorcery in the city and astonished the people of Samaria, claiming that he was someone great,

(10)  to whom they all gave heed, from the least to the greatest, saying, “This man is the great power of God.”

(11)  And they heeded him because he had astonished them with his sorceries for a long time.

(12)  But when they believed Philip as he preached the things concerning the kingdom of God and the name of Jesus Christ, both men and women were baptized.

They believe Philip, {important} preaching the Gospel of the Kingdom of God and the Gospel of Jesus Christ, faith came by hearing the word.

(13)  Then Simon himself also believed; and when he was baptized he continued with Philip, and was amazed, seeing the miracles and signs which were done.

Philip was doing miracles and signs

(14)  Now when the apostles who were at Jerusalem heard that Samaria had received the word of God, they sent Peter and John to them,

This is big time News.  “…Peter and John”: Always paired together.

(15)  who, when they had come down, prayed for them that they might receive the Holy Spirit.

(16)  For as yet He had fallen upon none of them. They had only been baptized in the name of the Lord Jesus.

(17)  Then they laid hands on them, and they received the Holy Spirit.

After baptism, we are to lay hands on the person who was baptize to receive the Holy Spirit.  If this, laying on hands, has not been done, maybe you have not received the Holy Spirit.

Remember, the Apostle Paul had the same situation.

Acts 19:5-6 On hearing this, they were baptized in the name of the Lord Jesus. (6) When Paul laid his hands on them, the Holy Spirit came on them, and they began to speak in tongues and to prophesy.

(18)  And when Simon saw that through the laying on of the apostles’ hands the Holy Spirit was given, he offered them money,

(19)  saying, “Give me this power also, that anyone on whom I lay hands may receive the Holy Spirit.”

Simon offered money! He didn’t ask for the Spirit himself, he wanted the power to give the Spirit.

(20)  But Peter said to him, “Your money perish with you, because you thought that the gift of God could be purchased with money!

(21)  You have neither part nor portion in this matter, for your heart is not right in the sight of God.

(22)  Repent therefore of this your wickedness, and pray God if perhaps the thought of your heart may be forgiven you.

Simon still had the opportunity to repent

(23)  For I see that you are poisoned by bitterness and bound by iniquity.”

(24)  Then Simon answered and said, “Pray to the Lord for me, that none of the things which you have spoken may come upon me.”

(25)  So when they had testified and preached the word of the Lord, they returned to Jerusalem, preaching the gospel in many villages of the Samaritans.

(26)  Now an angel of the Lord spoke to Philip, saying, “Arise and go toward the south along the road which goes down from Jerusalem to Gaza.” This is desert.

A messenger, angel, spoke with Philip  (just a matter of fact)

(27)  So he arose and went. And behold, a man of Ethiopia, a eunuch of great authority under Candace the queen of the Ethiopians, who had charge of all her treasury, and had come to Jerusalem to worship,

(28)  was returning. And sitting in his chariot, he was reading Isaiah the prophet.

(29)  Then the Spirit said to Philip, “Go near and overtake this chariot.”

(30)  So Philip ran to him, and heard him reading the prophet Isaiah, and said, “Do you understand what you are reading?”

(32)  The place in the Scripture which he read was this: “HE WAS LED AS A SHEEP TO THE SLAUGHTER; AND AS A LAMB BEFORE ITS SHEARER IS SILENT, SO HE OPENED NOT HIS MOUTH.

Isaiah 53:7 He was oppressed and he was afflicted, yet he didn’t open his mouth; like a lamb that is led to the slaughter, as a sheep that before its shearers is silent, so he did not open his mouth.

(33)  IN HIS HUMILIATION HIS JUSTICE WAS TAKEN AWAY, AND WHO WILL DECLARE HIS GENERATION? FOR HIS LIFE IS TAKEN FROM THE EARTH.”

Isaiah 53:8 By oppression and judgment he was taken away. Yet who of his generation protested? For he was cut off from the land of the living; for the transgression of my people he was punished.

(34)  So the eunuch answered Philip and said, “I ask you, of whom does the prophet say this, of himself or of some other man?”

(35)  Then Philip opened his mouth, and beginning at this Scripture, preached Jesus to him.

Preached unto him Jesus” He preached a person: The Lord Jesus

(36)  Now as they went down the road, they came to some water. And the eunuch said, “See, here is water. What hinders me from being baptized?”

(37)  Then Philip said, “If you believe with all your heart, you may.” And he answered and said, “I believe that Jesus Christ is the Son of God.”

(38)  So he commanded the chariot to stand still. And both Philip and the eunuch went down into the water, and he baptized him.

(39)  Now when they came up out of the water, the Spirit of the Lord caught Philip away, so that the eunuch saw him no more; and he went on his way rejoicing.

(40)  But Philip was found at Azotus. And passing through, he preached in all the cities till he came to Caesarea.

Caesarea: – Political capital of Judea on the coast.  It was built by Herod in honor of Augustus. Between Carmel and Joppa, 55 mi NW of Jerusalem on the Mediterranean.

We lose sight of Philip for a time.

Paul heading to Jerusalem – About 25 years later – about 60 AD

Act 21:8  On the next day we who were Paul’s companions departed and came to Caesarea, and entered the house of Philip the evangelist, who was one of the seven, and stayed with him.

You think it was an interesting conversation between the Apostle Paul and Philip, about being forced to flee Jerusalem?

Philip is now listed as an evangelist and probably used his house for the place to meeting.  Well off?

(9)  Now this man had four virgin daughters who prophesied.

Joel 2:28  “And it shall come to pass afterward That I will pour out My Spirit on all flesh; Your sons and your daughters shall prophesy, Your old men shall dream dreams, Your young men shall see visions.

What do we really know about Philip from the Scriptures?

Philip was introduced as a Deacon in Acts 6; and as an evangelist in Acts 21

Philip had these characteristics:

Eusebius wrote:  Renowned, the daughters of Philip for the prophecy gifts.

Philip and his four virgin daughters who were prophetesses are said to have been buried in Hierapolis, Turkey, Asia.

To me, Jesus was able to use Philip mightily to bring the Gospel to many, many individuals.  He was a blessing for many, many years.