Pentecost 2020: Birth of the Church

We are celebrating today when the Holy Spirit was given out to the Body of Jesus and the Start of the New Testament Church. 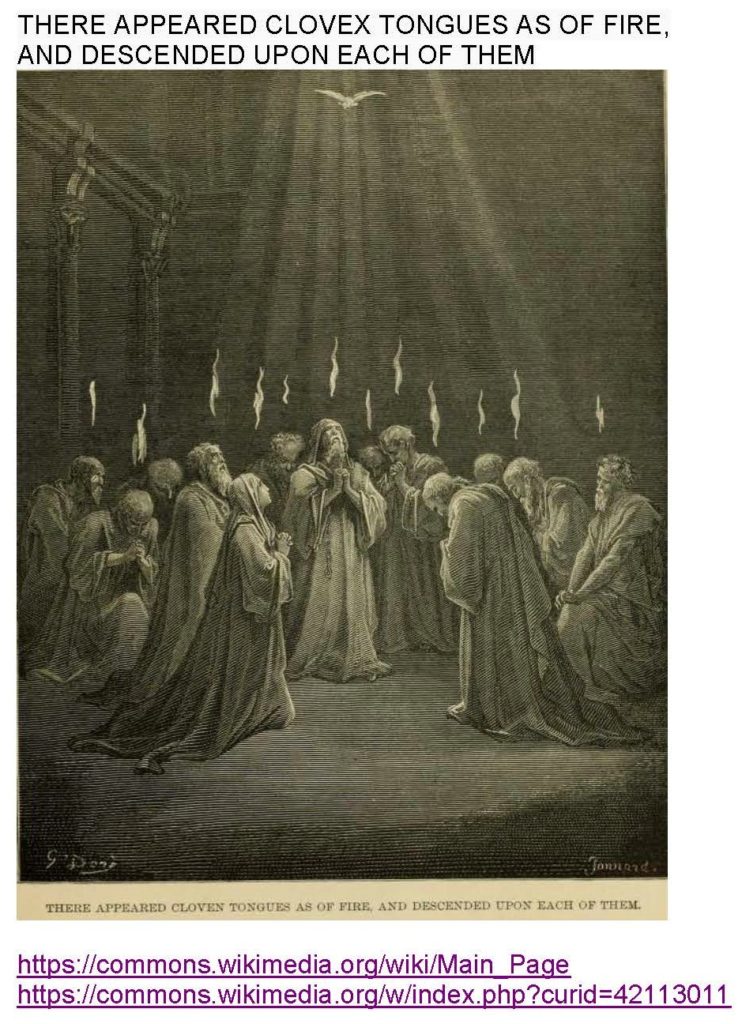 Pentecost is the festival when Christians celebrate the gift of the Holy Spirit and it is celebrated on the Sunday 50 days after the Wave Sheaf Offering during the Passover season.

Leviticus 23:15 Starting the day after the Sabbath, count for yourselves seven weeks from the day you brought the sheaf of wave offering. They are to be complete.

Leviticus 23:21 “On the same day proclaim a sacred assembly for yourselves. You are not to do any servile work–and this is to be an eternal ordinance wherever you live throughout your generations.

After His resurrection, Jesus appeared to his disciples and instructed them  to do what:

Luke 24:48-49 You are witnesses of these things. (49) I am sending to you what my Father promised, so stay here in the city until you have been clothed with power from on high.”

Acts 1:2-3 up to the day when he was taken up to heaven after giving orders by the Holy Spirit to the apostles he had chosen. (3) After he had suffered, he had shown himself alive to them by many convincing proofs, appearing to them during a period of 40 days and telling them about the kingdom of God.

Acts 1:4-5 While he was meeting with them, he ordered them, “Don’t leave Jerusalem. Instead, wait for what the Father has promised, about which you heard me speak. (5) For John baptized with water, but you will be baptized with the Holy Spirit a few days from now.”

Acts 1:8 But you will receive power when the Holy Spirit comes on you, and you will be my witnesses in Jerusalem, in all Judea and Samaria, and to the ends of the earth.”

Acts 1:15 At that time Peter got up among the brothers (there were about 120 people present) and said,

For 40 days Jesus was with them, after which he ascended to heaven.

Remember, From Passover to Pentecost was 50 days, so they waited 10 days until Pentecost in Jerusalem as they were told.

They stayed in Jerusalem, the Holy Spirit Descends on them.

Acts 2:1 When the day of Pentecost was being celebrated, all of them were together in one place.

Did they do this for the nine days leading up to celebrate Pentecost as their custom was.

Acts 2:2 Suddenly, a sound like the roar of a mighty windstorm came from heaven and filled the whole house where they were sitting.

Acts 2:3 They saw tongues like flames of fire that separated, and one rested on each of them.

Acts 2:4 All of them were filled with the Holy Spirit and began to speak in other languages as the Spirit gave them that ability.

The Power of the Holy Spirit, came to the 120, Jesus considered this a baptism for His followers at the time and a laying of Jesus hands on them and becoming the first of many in the Body of Jesus.

The Holy Spirit enable the disciples to speak in foreign languages.

Acts 2:5 Now God-fearing Jews from every nation were living in Jerusalem.

Acts 2:6 When that sound came, a crowd quickly gathered, startled because each one heard the disciples speaking in his own language.

Acts 2:7 Stunned and amazed, they asked, “All of these people who are speaking are Galileans, aren’t they?   {Galileans?  Did Jesus sound like this}

Acts 2:8 So how is it that each one of us hears them speaking in his own native language: {miracle}

Acts 2:9-11 Parthians, Medes, Elamites, residents of Mesopotamia, Judea, Cappadocia, Pontus, Asia, (10) Phrygia, Pamphylia, Egypt, the district of Libya near Cyrene, Jewish and proselyte visitors from Rome, (11) Cretans, and Arabs, listening to them talk in our own languages about the great deeds of God?”   {or great deeds, wonders, wonderful works, of God}

Acts 2:12 All of them continued to be stunned and puzzled, and they kept asking one another, “What can this mean?”

Acts 2:13 But others kept saying in derision, “They’re drunk on sweet wine!”

Peter sermon is not about the Holy Spirit, it is about the Son of God, Jesus,  and answers their question of “What can this mean What meanest this?”

Acts 2:14 Then Peter stood up among the eleven apostles and raised his voice to address them: “Men of Judea and everyone living in Jerusalem! You must understand something, so pay close attention to my words.

Acts 2:15 These men are not drunk as you suppose, for it’s only nine o’clock in the morning.

The Jews scarcely ever ate or drank, for that hour was the hour of prayer was their custom.

Acts 2:16 Rather, this is what was spoken through the prophet Joel:

Acts 2:17 ‘In the last days, God says, I will pour out My Spirit on everyone. Your sons and your daughters will prophesy, your young men will see visions, and your old men will dream dreams.  {My Spirit}

Last Days:  Is this the start of the Last Days. Workers will receive the Spirit.

Acts 2:18 In those days I will even pour out my Spirit on my slaves, men and women alike, and they will prophesy.

Even Workers will receive the Holy Spirit

Acts 2:19 I will display wonders in the sky above and signs on the earth below: blood, fire, and clouds of smoke.

Earth beneath:  miracles done by Christ, and his apostles, on earth;

Acts 2:20 The sun will become dark, and the moon turn to blood, before the coming of the great and glorious Day of the Lord.

Day of the Lord:  This is obviously speaking of very end time issues.

Acts 2:21 Then whoever calls on the name of the Lord will be saved.’

This verse destroys Jewish prejudice. Not only just Jewish, but also the Gentiles, can be saved.

Acts 2:22  “Fellow Israelis, listen to these words: Jesus from Nazareth was a man attested to you by God through miracles, wonders, and signs that God performed through him in your midst, as you yourselves know.

Peter begins to preach Jesus directly to them.  Jesus is the primary subject (not the Holy Spirit).  They were there and saw it all.

Acts 2:23 After he was arrested according to the predetermined plan and foreknowledge of God, you crucified this very man and killed him by the hands of lawless men.

Gospel:  have crucified, and put to death;

Acts 2:24  But God raised him up and put an end to suffering of death, since it was impossible for him to be held by it.

Acts 2:25  For David says about him, ‘I always keep my eyes on the Lord, for he is at my right hand so that I cannot be shaken.

Acts 2:26  That is why my heart is glad and my tongue rejoices, yes, even my body still rests securely in hope.

Acts 2:27 For you will not abandon my soul to Hades or allow your Holy One to experience decay.

Acts 2:28  You have made the Ways of Life known to me, and you will fill me with gladness in your presence.’

Acts 2:29  “Brothers, I can tell you confidently that the patriarch David died and was buried, and that his tomb is among us to this day.

David is really dead and  is asleep or unconscienced

Acts 2:30  Therefore, since he was a prophet and knew that God had promised him with an oath to put one of his descendants on his throne,

God had sworn:  God promise, God would raise up Christ to sit on David throne”: When?

Acts 2:31 he looked ahead and spoke about the resurrection of the Messiah: ‘He was not abandoned to Hades, and his flesh did not experience decay.’  {5 days}

Acts 2:32  “It was this very Jesus whom God raised, and of that we are all witnesses.

Acts 2:33  He has been exalted to the right hand of God, has received from the Father the promised Holy Spirit, and has caused you to experience what you are seeing and hearing.

Jesus is at the right hand of the Father, is why you see and hear now the Holy Spirit and is a proof of Jesus.

Acts 2:35 until I make your enemies your footstool.”‘

Enemies your footstool:  When the work of Jesus has ended and Jesus has conquered all, then all power is given up to the Father

Psalms 110:1 A Davidic psalm. A declaration from the LORD to my Lord: “Sit at my right hand until I make your enemies your footstool.”

Jesus had just established himself as the final Lord, King and Priest over the world.

Acts 2:36 “Therefore, let all the people of Israel understand beyond a doubt that God made this Jesus, whom you crucified, both Lord and Messiah!”

This is the theme of Peter’s sermon.  This is the key Wording in this sermon: Jesus is Lord and Messiah {Christ}! (Isa 53; Isa 61).

Acts 2:37  When the crowd that had gathered heard this, they were pierced to the heart. They asked Peter and the other apostles, “Brothers, what should we do?”  {many have heard Jesus personally in the last 3.5 years}

They realize their sins, and were pierced through their hearts with sorrow,

The crowd asked a good question:  What shall we do

Acts 2:38 Peter answered them, “Every one of you must repent and be baptized in the name of Jesus the Messiah for the forgiveness of your sins. Then you will receive the Holy Spirit as a gift.

Acts 2:39 For this promise belongs to you and your children, as well as to all those who are distant, whom the Lord our God may call to himself.”

Acts 2:40 Using many different expressions, Peter continued to testify and to plead with them, saying, “Be saved from this corrupt generation!”

Acts 2:41 So those who welcomed his message were baptized. That day about 3,000 people were added to their number.

Here in Peter’s own words he is acknowledging that Jesus call is not only to Jews, but to Gentiles, although it takes him awhile before he realizes that he is supposed to go to the Gentiles also. {it took 10 years? and some nudging}

This was the first Sermon given by Peter.  Take time to think about it, mediate about it and thank God we are called to be part of the Body.