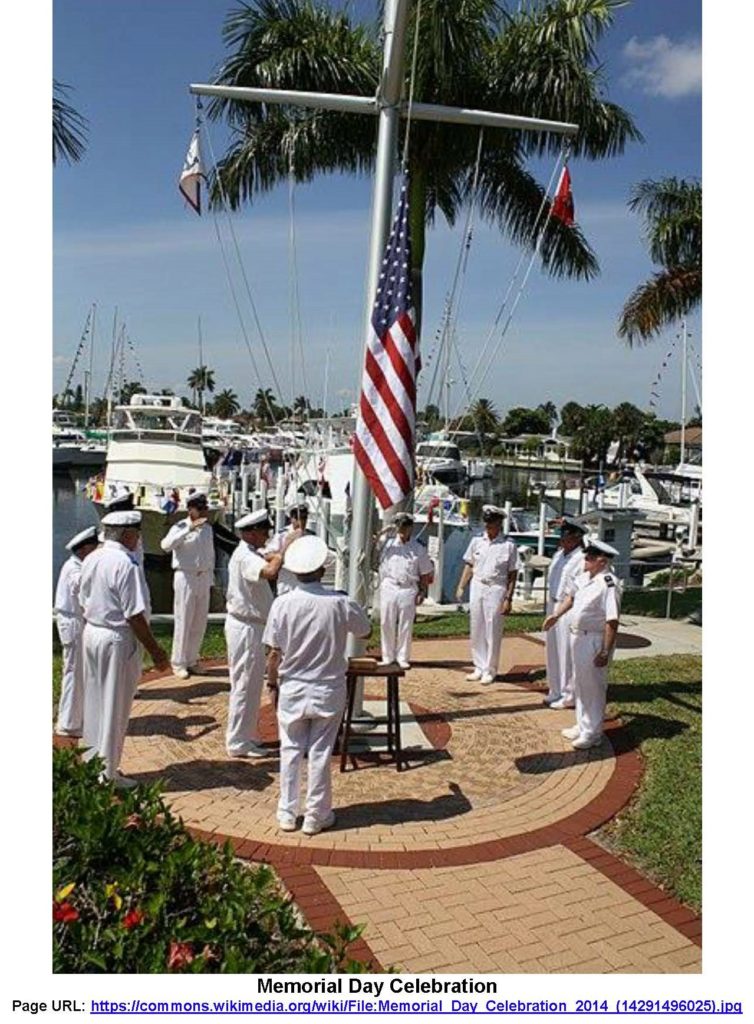 The loss of memory is a sad thing. It cuts us off from days gone by. It strips away our treasured past experiences. It erases our personal history and leaves us with blank pages.  We know history does repeats itself because of loss of memory.

We now center all of our attention only on our own time and place. We act as though the present is all that matters and the past is something that can be safely cast off and left behind like a worn-out pair of shoes.

The History of Memorial Day. Originally called Decoration Day, from the early tradition of decorating graves with flowers, wreaths and flags, In 1873, New York was the first state to designate Memorial Day as a legal holiday

After World War I the day was set aside to honor all Americans who died in wars, then the custom was extended to pay tribute to deceased relatives and friends, both military and civilian.

To Show Honor, a small American flag is placed on each grave at all the Veterans National and Local Cemeteries.

We are told in the Bible to give honor to those who deserve honor.

Romans 13:7 Pay everyone whatever you owe them–taxes to whom taxes are due, tolls to whom tolls are due, fear to whom fear is due, honor to whom honor is due.

King David’s elite group of mighty men numbered approximately 30. Some of these mighty men of David had considerable military skill and the blessing of God. David’s mighty men served an important role in protecting the king and fighting for the freedom of their nation, the land of Israel.

1 Chronicles 11:15 Another time, three of The Thirty Chief Men went to David while he was hiding in the cave of Adullam. The Philistines were camped in the valley of Rephaim,

These mighty men of David were a group of David’s toughest military warriors who were credited with heroic feats,

The Bible does not hold for Heroic Death in battle.  There is No text that glorifies battlefield death.  We are told valor, on the battlefield and beyond, and thus affirms the importance and benefits of military might.  They did not want one to die, but it happens in warfare.  The Scriptures have few references to battlefield death, except to give numbers of deaths of soldiers. They would mourn and then wept for them for a number of days.

2 Samuel 1:12 They mourned and wept and fasted till evening for Saul and his son Jonathan, and for the army of the LORD and for the nation of Israel, because they had fallen by the sword.

Notice, David mourned not only for the fallen king and prince, but also for those who had died from the ranks of Saul’s army.

2 Samuel 1:17-18 So David intoned this song of lament about Saul and his son Jonathan, (18) and he gave orders to teach the descendants of Judah the art of warfare, as is recorded in the Book of Jashar:

Decent burial was regarded to be of great importance in ancient Israel,

Abraham’s purchase of the cave at Machpelah as a family tomb (Gen. 23) and the subsequent measures taken by later patriarchs to ensure that they would be buried there

Genesis 23:2 She died in Kiriath-arba (that is, in Hebron) in the land of Canaan. Abraham went in to mourn for Sarah and to weep for her.

Genesis 23:20 And so the field with its cave was deeded by the Hittites to Abraham as a burial site.

Genesis 35:20 Jacob erected a pillar over her grave, and that pillar stands over Rachel’s grave to this day.

Numbers 20:29 When the entire community saw that Aaron had died, they mourned in memory of Aaron for 30 days.

Deuteronomy 34:8 The Israelis mourned for Moses at the desert plain of Moab for 30 days, after which the period of mourning for Moses was completed.    {mourned for 30 days}

1 Kings 2:10 After this, David died, as had his ancestors, and he was buried in the city of David.

1 Kings 11:43 Then Solomon died, as had his ancestors, and he was buried in the city of his father David. His son Rehoboam reigned in his place.

2 Samuel 3:32 and they buried Abner at Hebron. The king {David} wept loudly at Abner’s grave, and all the people wept, too.

Luke 8:52 Now everyone was crying and wailing for her. But Jesus said, “Stop crying! She’s not dead. She’s sleeping.”

Acts 8:2 Devout men buried Stephen as they mourned loudly for him.

Acts 9:39 So Peter got up and went with them. When he arrived, they took him upstairs. All the widows gathered around Peter, crying and showing him all the shirts and coats Dorcas had made while she was still with them.

Public mourning was loud and boisterous.

Mark 5:38-39 When they came to the home of the synagogue leader, Jesus saw mass confusion. People were crying and sobbing loudly. (39) He entered the house and asked them, “Why all this confusion and crying? The child isn’t dead. She’s sleeping.

This is how they honor the dead.

Our Military personal were there to protect our county and give us freedom to worship the Lord God.

The Apostle Paul tells us

Romans 8:21 that the creation itself will be liberated from its bondage to decay and brought into the freedom and glory of the children of God.

God gives us freedom to choose our own path. God created human beings, not robots

Since we are observing a memorial for our past soldiers, we also have many memorials in the Scriptures.

Memorial means a remembrance, a reminder, a record.

Genesis 50:10 When they arrived at Atad’s threshing floor, which is located beyond the Jordan River, they held a great and mournful memorial service, during which Joseph spent seven days mourning for his father.

During the Lord’s Feast Days, we observe a Memorial for each Feast Day.

Sacrifices are also a memorial to Jesus

Leviticus 6:15 He is to take a handful of fine flour for a grain offering, some olive oil, all of the frankincense on the grain offering, and make a sacrifice of smoke on the altar as a memorial portion, a pleasing aroma to the LORD.

Matthew 26:13 I tell you with certainty, wherever this gospel is proclaimed throughout the whole world, what she has done will also be told as a memorial to her.“

Memorials are important to every nation. They not only help us remember the past, but they also encourage us to look with hope toward the future.

Passover is a memorial of Jesus Sacrifice

Luke 22:19 And He took bread, gave thanks and broke it, and gave it to them, saying, “This is My body which is given for you; do this in remembrance {memory}, of Me.”

Acts 10:4 Cornelius {a Gentile} stared at him in fear. “What is it, Lord?” he asked. The angel answered, “Your prayers and gifts to the poor have come up as a memorial offering before God.

If we are a Christian, we are a part of Jesus Army.

2 Timothy 2:3-4  Take your share of suffering as a good soldier of Jesus Christ, just as I do;  (4)  and as Christ’s soldier, do not let yourself become tied up in worldly affairs, for then you cannot satisfy the one who has enlisted you in his army.

Parable of the Sower, let’s look at it while we are in God’s Army

Luke 8:11 “Now this is what the parable means. The seed is God’s word.

Luke 8:12 The ones on the path are the people who listen, but then the devil comes and takes the word away from their hearts, so that they may not believe and be saved.

This soldier became a battle casualty by the devil with hard heart before they could believe and be saved. {vs 5}

Luke 8:13 The ones on the stony ground are the people who joyfully welcome the word when they hear it. But since they don’t have any roots, they believe for a while, but in a time of testing they fall away.

This soldier received his strips, but hard times come and could not endure the time of trial and then lose interest.  {vs 6}

Luke 8:14  The ones that fell among the thorn bushes are the people who listen, but as they go on their way they are choked by the worries, wealth, and pleasures of life, and their fruit doesn’t mature.

This soldier lost their faith they became caught up in worldly things, choked out their faith and not do the Godly things that a soldier is to do. {vs 7}

Luke 8:15  But the ones on the good soil are the people who hear the word but also hold on to it with good and honest hearts, producing a crop through endurance.”

This soldier produce righteous fruit as a soldier in Jesus Army and received promotions by clinging to Jesus’s Word and doing what they are supposed to do.  {vs 8}

Our spiritual battle is only just beginning for each of us as a soldier of Jesus Army.

Matthew 24:6 You are going to hear of wars and rumors of wars. See to it that you are not alarmed. These things must take place, but the end hasn’t come yet,

How do we fight this war as soldiers

2 Corinthians 10:3-5 Of course, we are living in the world, but we do not wage war in a world-like way. (4) For the weapons of our warfare are not those of the world. Instead, they have the power of God to demolish fortresses. We tear down arguments (5) and every proud obstacle that is raised against the knowledge of God, taking every thought captive in order to obey the Messiah.

We enjoy a lot of freedom in our country.

Remember, Memorial Day is celebrated to recognize the sacrifices made by our military soldiers.

2 Peter 1:13-14 Yet I think it is right to refresh your memory as long as I am living in this bodily tent, (14) because I know that the removal of my bodily tent will come soon, as indeed our Lord Jesus, the Messiah, has shown me.

Remember, and most important thing in our lives and family, is Jesus Who made a similar sacrifice for each of us.  We celebrate this every year at Passover season.

So finally, think about our military soldiers in the past during this Memorial season.